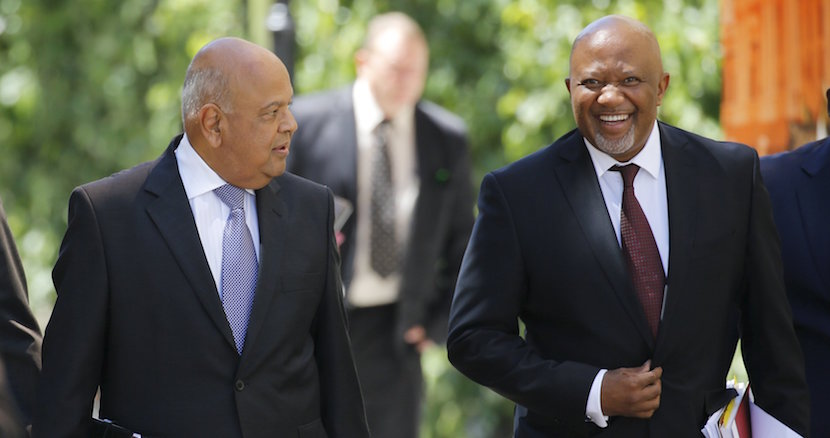 There’s a danger in telescoping all our attention on the possibility of Zuma removing Gordhan when he’s actually more likely to tactically extract other non-loyalists in his cabinet; which could put the crosshairs on Gordhan’s deputy minister, Mcebisi Jonas. So argues emerging market analyst Peter Attard Montalto, not because Gordhan has resisted Treasury capture, but because Jonas, also considered ‘disloyal,’ is less economically risky. The big picture is that the rest of the cabinet also has it’s Zuptoid detractors, and they need to go in order to secure Zuptoidal dominance before the ANC’s elective conference in December – and thus pave the way for the safe, prosecution-free exit of our fearless Spy-in Chief. Any doubt that the markets will react even to Jonas going vanished when Msholozi instructed him to stay home instead of joining Gordhan on a post-Budget overseas roadshow in the UK and USA this week. Zuma also recalled Gordhan, who sanguinely responded to journalists eager to discern meaning in the unusual move, that he served ‘at the pleasure of the president’. The combined moves cost the rand 3% in overnight trade with New York. Whether the market reaction to any cabinet reshuffle will be as mild as Zuma (hopefully) wants, is now in severe doubt. All we can hope for is that our Zuptoid-in-Chief will be reminded at his party’s elective conference that he serves at the pleasure of the people and that they now want a different kind of leader. – Chris Bateman

Cape Town – Market reaction to President Jacob Zuma’s instruction that Finance Pravin Gordhan immediately return from a post-Budget investor roadshow in the UK and US, shows that the bigger picture is not taken into account, said emerging market economist Peter Attard Montalto.

In a company note issued late on Monday, Montalto (from the Japanese bank Nomura) said the markets have focused too much on the National Treasury and that a Cabinet reshuffle, which is widely expected, is also about Zuma wanting to assert loyalty and rid the Cabinet of detractors, such as certain SACP members.

“We should not forget that the whole point of a reshuffle is bigger,” Montalto said.

On Monday, markets reacted swiftly to the news, with the rand losing more than 3% to R12.84 in overnight trade in New York. By 21:43 the local unit was trading at R12.82/$. Before the Gordhan bombshell, the rand raced to an almost 2-year-high of R12.31 to the greenback.

“The market focuses too much on National Treasury. If it (a cabinet reshuffle) happens it will be messy. But the markets forget the bigger context.”

Montalto opines that a Cabinet reshuffle would “surely” have been discussed during a meeting of the ANC’s National Working Committee late on Monday, although it was not officially on the agenda.

He is of the view though that it is more likely that Jonas would be removed from his position than Gordhan.

“The risk of a Gordhan exit is still clearly there and I think Zuma is in favour of it, but he is probably testing the market,” Montalto says.

Montalto also believes that Monday’s “shock” would give the South African Reserve Bank (SARB) a “perfect reason” not to abandon its “fear narrative” around the rand.

The SARB’s monetary policy committee meets on Thursday to discuss its policy decision regarding interest rates. Analysts have had mixed views as to whether interest rates, currently at 7%, would be retained at the same level or adjusted downwards.

“The market got too ahead of itself in thinking the SARB would cut interest rates,” Montalto says.

“Today is a reminder that risks are there. Although the SARB won’t mention this specifically (at its meeting on Thursday) they do worry in my view about political risk that is factored into the currency, as well as about second round effects, such as on inflation.” – Fin24