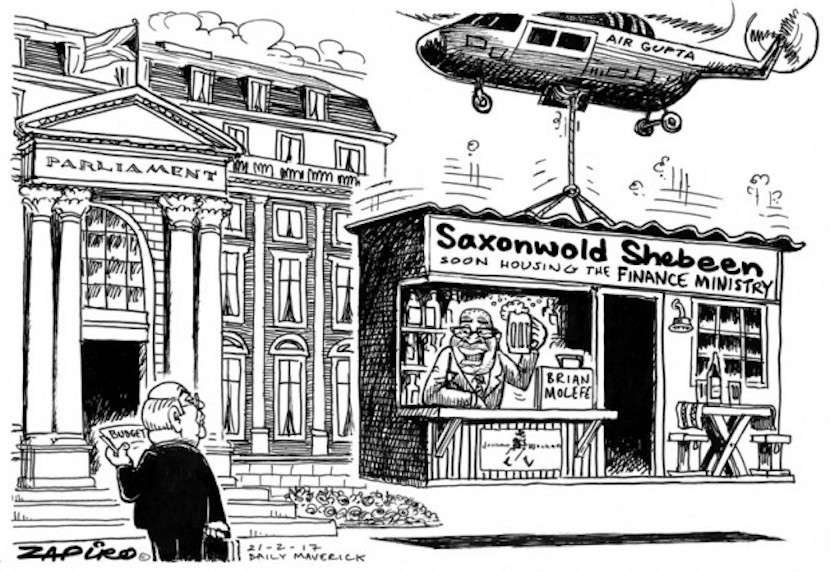 Investment analysts expect finance minister Pravin Gordhan to be axed soon as President Jacob Zuma moves to appease his captured faction. But the jury is out on whether he will still pick Brian Molefe, former CEO of Eskom, to take control of the National Treasury. Molefe has been linked directly to the controversial Gupta family at the centre of state capture investigation. Molefe was also caught lying about this in public, claiming he was at a non-existent Saxonwold “shebeen” rather than the Gupta family’s Saxonwold home. He is probably Zuma’s preferred choice, but his appointment is likely to unsettle markets because he is tainted by corruption allegations – including being involved in irregular financial deals while at Eskom. Peter Attard Montalto, a respected South Africa analyst in London, has put six possibilities on the table. He is no longer so sure that Brian Molefe will pick up where Gordhan has left off, though he still thinks it is possible Molefe could be appointed. Meanwhile, BizNews is reliably informed that Sfiso Buthelezi, a businessman close to Zuma, is the front-runner in this race. BizNews Premium carried the story earlier this week. – Jackie Cameron

Pandora’s box is being nudged a second time, says Peter Attard Montalto, who works for Japanese financial services giant Nomura in London. First, there was the surprise recall of a Finance Minister on a foreign roadshow and now there is silence and speculation, he notes.

Montalto tells his clients that President Zuma has been attempting a major reshuffle since the start of 2015 but has never found the right timing or coherence of narrative to pull one off.

“Nene-gate on 9 December 2015 was a specific response to specific events at the December cabinet meeting on nuclear power and the SAA in particular, which led to an ill-thought-through and ill-prepared reshuffle and then a reversal that was ultimately prompted by elements within President Zuma’s own faction.”

Nomura believes President Zuma wants to undertake a reshuffle, is under pressure from his own side for greater access to the National Treasury and to remove SACP members. “We are closer than before,” says Montalto.

Candidates for Finance Minister – or a National Treasury role

Nomura has a short-list of six potential candidates for Finance Minister and notes that a new deputy could also be needed:

There “would be serious questions over his relationship with the Guptas after previous supportive media comments on them, as well as issues around tendering and patronage at Eskom and the Public Protector report case against him (though he was previously viewed very positively from his time running Transnet and history at the National Treasury)”.

He may get another economic position in a reshuffle, says Montalto. Van Rooyen is currently Minister of Cooperative Governance and Traditional Affairs, and was previously briefly Finance Minister between Nhlanhla Nene and Pravin Gordhan. He is “viewed by business locally and by markets as a ‘Gupta deployee’”.

“This is the former Mayor of Tshwane, now out of a job. We believe he has shifted from being in anti-Zuma camp to Zuma camp and is seen as a capable pair of hands technically from time in Tshwane.”

5. Makhosi Khoza – “uncertain chance, could appear elsewhere in a reshuffle”

“Former member of the parliamentary finance committee, now chair of the public services committee, we believe she is loyal to President Zuma.”

“Former Health and Home Affairs Minister, AU President, candidate for President of ANC in December. While we think she could be in contention the whole point of her entering parliament is that she needs a high profile role that has a low workload so she can go out and campaign. The position of Finance Minister definitely wouldn’t offer that; a new minister in the Presidency for Transformation, say, could be more appropriate.”

“The problem, we believe, is that any replacement would be appointed with the express view to facilitate tenderpreneurship and patronage,” says Nomura.

“We would not expect fiscal policy to shift significantly after a reshuffle. Indeed, the expenditure ceiling could even survive. We do not believe the Zuma faction cares about fiscal policy that much as a macroeconomic lever.

“Instead, we think it is concerned about issues like procurement regulations, National Treasury oversight of parastatals, National Treasury blocking contracts for politically connected people, and access to funds at the Public Investment Corporation (and) Industrial Development Corporation. These are the issues that matter to the Zuma faction more than the fiscal situation.