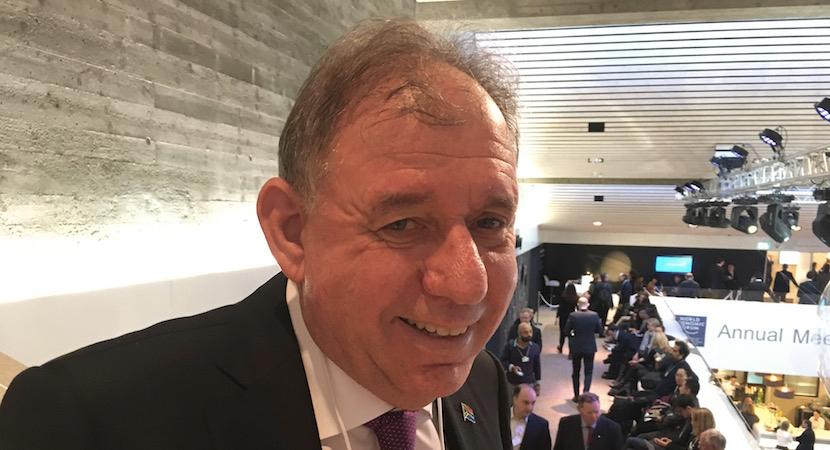 Despite the incredible success Investec has achieved since its humble beginnings in the wrong side of Johannesburg almost 40 years ago, co-founder and CEO Stephen Koseff has his feet planted on terra firma. This comes through strongly in his responses to questions about global volatility; the South African CEO Initiative and speculation on his retirement. Here’s an edited version of this morning’s media conference call which starts with a short introduction by Koseff to Investec’s 2017 financial results. – Alec Hogg

Stephen Koseff: We’re delighted that despite significant macro volatility and uncertainty in our key markets, revenues in our business broke for £2bn barrier for the first time in our history growing 18.1% to a little under £2.3bn. This was driven by a strong performance in all three of our business areas, demonstrating the diversity of our revenue streams and declined focus and resilience of our franchises. Our operating profits increased 18.5% to£599m and statutory adjusted earnings per share were up 16.9% to 48.3 pence, in line, or maybe slightly at pre-close briefing.

We are increasing our final dividend to 13p, making a 23p total for the year, an uplift of 9.5% on the previous year, which also reinforces our confidence in the business and its future. In the period we did benefit from currency movements with an 11.1% appreciation of the average Rand in Sterling rate, stand £150.7bn up to 23.9% in the year and more than three times the amount we managed just eight years ago. It is fair to say that this year has been one of the most unpredictable macroeconomic environments that I can remember. However Investec has shown that it has the franchise strength, the financial strength and mental strength to ride this volatility and be confident about our future. I’m ready for questions.

Won’t you just elaborate a little bit on what you said right at the end there, about one of the most unpredictable macroenvironments that you’ve seen?

On the 24th of June last year, we had the referendum vote which voted for Brexit, which was not expected, then we had Donald Trump elected as President of the United States, which was not expected. Then right throughout the year, we had the South African incumbent minister of Finance being attacked from left, right, and centre with his eventual removal at the end of March. Therefore,I think there was a lot of volatility in all the markets in which one operated. That does create a degree of uncertainty. However, strangely, clients continued to be proactive and continued to look through all the volatility and uncertainty, and made investment decisions, so it was an unusual environment.

With this kind of volatility on the one side of the business, on the trading side of the business, surely that would have been a plus. Then the second thing, if you could just again elaborate a little bit more about the impact that it might have had on your South African clients, particularly in what we understand is a lot of money being taken into the offshore environment, whether that was a plus or a minus for you.

The trading side of the business generally is supported by volatility and we had, I suppose, decent trading income on the one hand, but volatility can affect decision-making and create a level of uncertainty. We’re not a very big trading bank but we did see quite a big increase in our trading revenue, although it’s a fraction at about 6% of our total revenue. We’re more a wealth manager, asset manager, and specialist bank than a trading bank. Our biggest revenue stream is from fees and commissions, which is more than half of our income, 55% of our income is fees and commissions, 30% is net interest income, and only about 6% is trading revenue.

Clients do invest; they diversify where they invest their money. In this particular period those clients that went offshore would have suffered because the Rand appreciated quite strongly, 11% on average, but much more in actual. I don’t think that would have had a massive impact. In fact, it would have been marginally negative on our results.

I understand that the CEO’s initiative took up quite a lot of time from other CEO’s. One of them Nicky Newton-King was saying that it took 20% of her time in the past year, how much time did you invest in that and looking back on it now, was it the right approach to have taken, given that the minister of finance was fired anyway?

Look, I think I would have probably spent a similar amount of time to Nicky because we both chair different committees. I think that obviously we were upset with the removal of the minister of finance. At the end of the day there’s the South Africa impact one has to try to look after, so the initiative is still carrying on. It went into freeze mode for a bit, but I think we’ve processed it and we are carrying on because we’re not looking at the politics. We’re looking at what we have to do on the ground for South Africa, but it does take a lot of time and we were quite upset because we felt that there was a breach of trust and we made a statement to that effect publicly.

I remember a time when one looked at banks after 2008, thinking that they were more utility type performances in the future and 18% is hardly a utility performance, it’s an excellent growth in profits, but could just unpack that a little. How much of that was currency movement because the Rand was so strong and how much of it is due to perhaps different opportunities that utilities don’t have, but clearly that banks might be getting now again?

Looking ahead you said you had an incredibly volatile period, given that the volatility is likely to stay there, what kind of a year are you guys projecting for yourselves, how do you address this kind of environment?

I just think you put your head down and you deal with the balls as they come. It’s like those video games where the little men jump up at you all the time and then you have to just navigate, it’s not like you can just say, “I’m going to do X, Y, Z”, you have to shift on the run and I think that’s why you have to have a flexible, adaptable culture. Obviously, you can’t adapt to everything, but you have to maintain. What we try to do as a firm, we maintain liquidity, we try to remain well capitalised, and we look for opportunities.

We don’t mind the volatility because obviously we have a culture that would thrive more on volatility than an environment where turkeys can fly, but it’s very hard to call. Next minute you could have some kind of massive event. Obviously in Macron winning in France was a very positive thing for Europe and so Europe looks like it could be a much more positive place. We have the UK election and then the Brexit negotiations. We don’t know if they’re going to be hard or soft, but you have to manage for the worst and hope for the best. As you know in South Africa, anything can happen.

Traders like #Investec FY2017 numbers – listen to the questions I posed to CEO Koseff this morning (1:30 into clip): https://t.co/dzLOtl9wHP pic.twitter.com/92pos1r6Xx

On that “anything can happen” there was a cover story recently in the Financial Mail, saying that you’re going to be leaving, what’s your comment on that?

They’re just speculating, Alec. I know that I have years on the clock, but I don’t feel like I need to leave and go anywhere and we’re in a process, but I’m not leaving anywhere. Obviously, everyone wants to know who’s going to take over and that’s something that we will come with in time, when we’re ready, but I’m still here for a while, for a reasonable period, but like any business you have to manage succession.

Just on the asset management side is there any thought of spinning that off, listing that separately? It seems to be the fashion nowadays.

No, it’s a core business of ours. Remember we did that deal for management some years back, so management own about 16% and they have a right to go to 20%.

(Bloomberg) – Investec, owner of a bank and money manager in South Africa and the UK, posted full-year earnings that beat analyst estimates as assets under management and lending jumped.

Net income for the 12 months ended March 31 climbed to 487.1 million pounds ($630.9m) from 423.1 million pounds a year earlier, the London and Johannesburg-based lender said in a statement on Thursday. Adjusted earnings per share increased 11 percent to 54.1 pence, compared with the 45.8 pence median estimate of eight analysts surveyed by Bloomberg.

Investec, which also has operations in Australia, makes most of its operating profit in South Africa, where the rand has risen 26 percent against the pound over the course of its fiscal year. The South African economy is forecast to grow in 2017 at about double last year’s pace, yet still remains sluggish after two ratings companies cut the country’s debt to junk status.

“Strong, sustainable levels of corporate and private-client activity are reaping rewards for the specialist bank, while both asset management and wealth and investment are benefiting from higher funds under management,” Managing Director Bernard Kantor said in the statement. Revenue broke through 2 billion pounds for the first time.