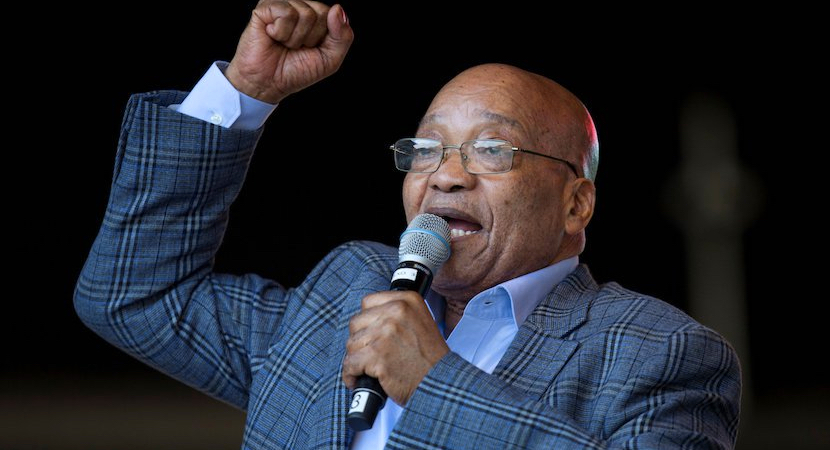 JOHANNESBURG — President Jacob Zuma – despite facing daily, growing controversy – practically laughed his way through Parliament yesterday as he answered questions from MPs. He had some strange answers too. In response to a quip by DA leader Mmusi Maimane that the ANC is rapidly losing power in light of its loss of four major metros – Zuma responded that his party would win back those metros or, as he put it, ‘things’ if a snap election was held. Of course, any rational person would highly doubt this. Then, a Cope MP – seemingly inspired by a recent post on BizNews – questioned Zuma on what his response was to South Africa being the only country in the world experiencing a technical recession right now. Zuma – as if living in a parallel universe – brushed her off, telling her that she must check her facts. Well, Mr Zuma, here are the facts below. The truth hurts, doesn’t it… – Gareth van Zyl

I found the following two tweets from someone covering Zuma’s address to Parliament interesting:

Cope MP DCarter follows up and attempts to correct Zuma. The only countries in recession are SA and Finland, she claims. #ZumaQandA @News24

Zuma says he doesn't know where Carter is getting her stats from. "Just do more research. You will get to the truth." #ZumaQandA @News24

I can help President Zuma out, and have an inkling where Cope MP D Carter got her stats from.

Most likely here or here. I know this because these are the only two places in the world where this observation was published.

Either way, the source is the same, namely RecessionALERT.com which in turn acquired the data from the Europe-based Organization for Economic Co-operation and Development (OECD). RecessionALERT.com ‘s business is advising mainly institutional clients on the state of the US and other economies, and I hardly think they would risk their reputation on dodgy assumptions.

Now since RecessionALERT posted their findings, Columbia came in with 1Q17 numbers which are negative. So as it stands the ONLY countries reporting negative GDP growth for 1Q17 are South Africa, Columbia and Iceland. But South Africa STANDS ALONE as the only country with two negative consecutive quarters of negative GDP growth, commonly referred to as a “technical recession”.

Russia is not playing nice with then Europeans anymore so OECD stopped reporting their data, but you can go to many sources that show Russia in positive growth territory since 4Q16.

But forget about two consecutive negative quarters. Let’s examine GDP growth over full 4 quarters (one year). Since our government is so fond of using “The Global Financial Crises” to justify the state of our economy, this should give a really good view of how we are faring against everyone else and the global economy:

Quite frankly the SA economy SUCKS against almost EVERYONE. And not just this quarter, not the quarter before but for four quarters. And no, this time, there is no global financial crises to blame. That ended in 2009, almost eight years ago. My personal view is the SA economy sucks and the recession has the current governments fingerprints ALL OVER IT.

And this is not just a sudden revelation.

We penned this concern in late 2015 already: Van Vuuren: SA’s ‘Zombie’ economy. A Zuma recession on the cards

So upon following President Zuma’s advice “Just do more research – you will get to the truth”, MP D Carter can conclude THE TRUTH SUCKS. Like the mismanagement of the SA economy by ALL responsible parties I might add, namely Business, Labor AND the Government. But the government shoulders bigger blame than the other two parties, since they failed to provide the LEADERSHIP expected from them.