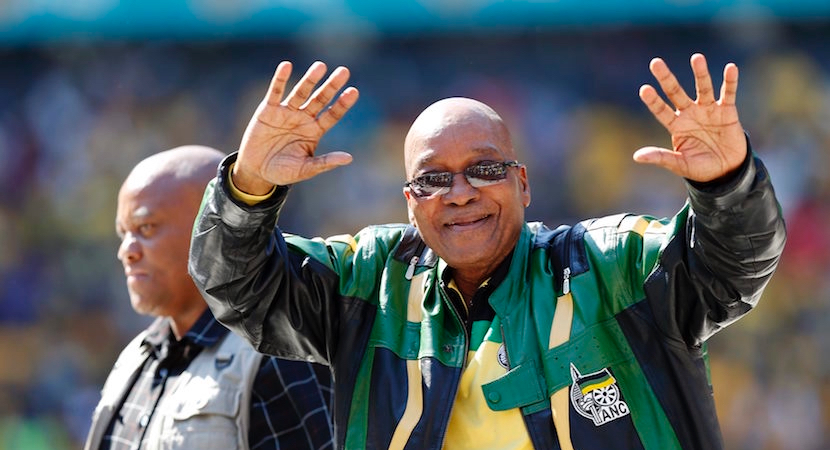 “I’m not dead yet,” President Jacob Zuma told the eNCA reporter Lester Kiewit when he asked why there was no statue of him outside the Nasrec Expo centre where the governing African National Congress is holding its five-day policy conference. That remark says a lot about the state of the ANC and of the nation under the president’s rule.

It appeared that President Jacob Zuma tried to avoid the media at the ANC policy conference. The media were fenced off for much of the time, the commissioners were – as usual – closed. The interactions with the media were largely formulaic, long boring press conferences at which spokesman Nathi Mthethwa warbled on for hours about white monopoly capitalism.

Perhaps the whole affair can be captured by President Jacob Zuma’s comment when asked by Kiewiet why there was not a statue of him in the grounds at Nasrec. There were a flurry of statues, including of Lilian Ngoyi and Nelson Mandela, of course. He replied: “I’m not dead yet.”

That pretty much says it about the state of the African National Congress which is now 105 years old and has been in power for 23 years.

eNCA’s Karima Brown said that the ANC was prepared to acknowledge “to a point” that it was in trouble. President Zuma had acknowledged, in the opening address last Friday, that the ANC had retreated in the three large metropolitan areas in the 2016 municipal elections. “But I was not convinced by (policy conference spokesman) Nathi Mthethwa’s diagnosis… and his reference to (Namibia’s ruling revolutionary party) Swapo for example… that it was in similar problems and had managed to (electorally) re-connect.” That was a reference to the 20 year itch suffered by post-revolutionary ruling parties in Africa, where their electoral fortunes tended to dip at the very least.

“Of course what Nathi Mthethwa didn’t say.. the ANC president is facing unpredecendented calls from within his own organisation that he steps down. He is facing a vote of no confidence (in parliament on 3 August).  Those who are potentially going to vote with their conciences are being threatened with expulsion. That hardly looks like ‘un-scientific evidence’ (referred to by Mthethwa) that the party is not in trouble.”

Ebrahim Fakir, a political analyst also interviewed on eNCA, considered the the matter of whether the ANC was taking coalitions with opposition parties seriously. “No they don’t. Clearly he (Mthethwa) is contradicting what his own party is saying… that they need to prepare for coalitions. Of course it remains to be seen… no one has the foresight to see what the future says. It was a schiszophrenic briefing. He says things that the party says but then contradicts himself.”

However, Fakie said: “Where the ANC has failed is presiding over economic growth and ensuring economic redistribution of that growth.”

In 2008 Zuma announced the "Second Transition". Now ANC is announcing it again. What happened over the last 8 years? Gupta transition?

In addition the ANC had lost the leverage over the three key drivers of growth which were the metropolitan municipal councils. “Once you lose leverage over a citizenry that is connected to global power and commerce … you have lost control over society.” He cited the example of the British Labour Party losing the London Metropolitan area as well as control over mining in the north of Britain. “That was the cataclysmic loss of the Labour Party to a Thatcherite Britain (in 1979). The ANC faces a similar crisis in historical terms … today.”

Asked about corruption Mthethwa said that South Africa had strong institutions dealing with corruption. Brown said the first thing that the Zuma administration did was replace the Scorpions with the Hawks. Successive leaders who headed the latter were “hollowed out as a weapons against corruption”. At the National Prosecuting Authority “technically we are still waiting for (its boss) Shaun Abrahams to explain to the president why he should not be suspended.” This followed the trumped up charges against former Finance Minister Pravin Gordhan which had “such a negative impact on our economy”.

President Zuma had himself desperately avoided court over corruption charges relating to the now rather ancient arms deal struck before he became president of the ANC and of the country. Brown noted there had been a flurry of state capture scandals. The ANC’s diagnosis about the state institutions being part of the architecture of fighting corruption “is rhetoric”. She said, instead: “This ANC administration has denuded those organisations’ ability to deal with corruption in a very comprehensive way.”

On economic transformation, there was much rhetoric about white monopoly capital and the need to fast-track land reform. There was a suggestion that a referendum be held on the land matter. The land issue goes to the core about the ANC’s inability to decide what sort of political party it is – is it socialist or does it believe in incentive based free market systems. The problem with a referendum on land reform is that the ANC could see itself facing a Brexit. Urban land owners, black and white, are unlikely to vote for land reform without compensation. So that is a non-starter.

Failing to cross the land Rubicon

It appears that the ANC is unable to cross the Rubicon on the land issue. In the context of about 10 percent of land being redistributed, few realise that the new black farmers on this land do not own the land – it is held by the state as a custodian. Therefore there are great hurdles in using this land as collateral for much-needed loans which fuel the agricultural economy. The ANC itself has acknowledged that 90 percent of the new black farming operations have been a financial failure. So why continue to harp on about land acquisition – in future possibly without any compensation. Black farmers have been set up to fail, because of the obvious lack of incentive to farm.

One thing that can be sure is that the ANC has lost its compass. It is betwixt and between, not sure where to go ideologically. It uses terms like “white monopoly capitalism” willy nilly, but insists that vast fiscus-gobbling state monopolies continue in state hands – even though it is patently obvious that state-run institutions in the wrong hands are a financial disaster – and are destroying jobs and undermining the economy. One only has to look at SAA (which has got another R2 billion bailout from the taxpayer), Prasa (which has bought billions of rands worth of locomotives which are the wrong size for South Africa) and Eskom (which is technically solvent but is driving up the cost of power), just for a start.

President Zuma calls for unity at the ANC policy conference. Nothing would unite us more than saying you're resigning. Unite us, Msholozi!

One suspects that Fakir is right. The ANC has pretty much already lost the power centres around which the economy pivots. It has lost Johannesburg. It has lost Tshwane. It has lost Nelson Mandela Bay. It is likely to lose the East Rand – Ekurhuleni – as well, in the longer term. It long ago lost Cape Town (in 2006).

Ideological dysfunction is one of the consequences of poor leadership. The ANC will have no chance of cleaning up its act if President Jacob Zuma continues in office until 2019. If, as many expect, his chosen candidate Nkosazana Dlamini-Zuma is elected to replace him as ANC president in December, the ANC will drop into a policy quagmire plagued which ideological contradictions and governing inertia. If a reformist candidate – be it Cyril Ramaphosa or someone else – is not elected as boss, the ANC has little chance of turning around its electoral decline. Intriguingly Zuma himself wants Ramaphosa to continue serving as Deputy President (or so it seems because his KwaZulu Natal ANC have suggested it. That feeds into the Institute of Race Relation’s CEO Fran Cronje’s belief that a deal has already been struck to ensure “unity” going forward. It is unlikely that such a unity – with President Nkosazana Dlamini-Zuma and Deputy President Cyril Ramaphosa – will prove to be a winning ticket at national elections in 2019.

But as we have seen in other Africa states, such as Zimbabwe and Namibia – where Zanu-PF and Swapo  have clung on to power for nearly 45 and nearly 30 years respectively – the ANC is a liberation home to many millions of people, warts and all. The ANC will be difficult to dislodge at any election, but failure to deal with ideological contradictions will weaken it at the polls. It needs to choose – and embrace – an inclusive growth/free market model to ensure that it will survive in the long term. That is a model where free market capitalism is open to all the people and incentives are provided to the working class, the voting chaff of the ANC. Otherwise it WILL go into long-term decline.