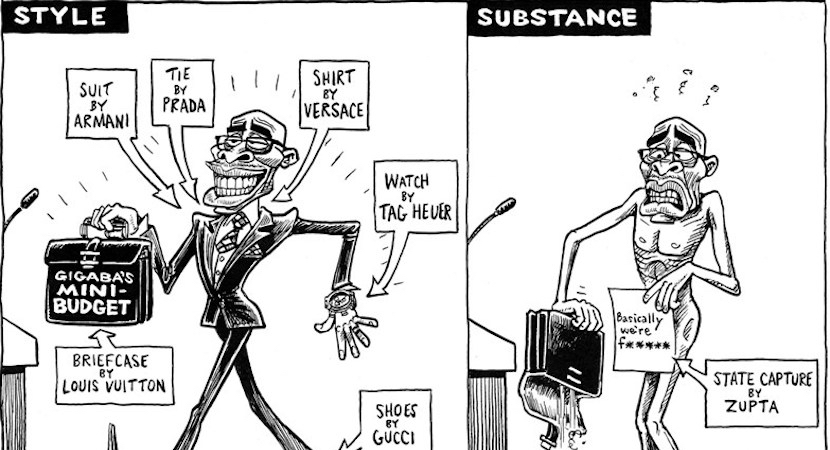 07 – April COMMENT: Edinburgh — South Africa’s new finance minister Malusi Gigaba has been groomed by the Gupta family and Russia over at least 10 years. This is apparent from details in his gift list. Fin24’s Liesl Peyper has been digging around in the Register of Members’ Interests, discovering that Gigaba has been receiving little treats from a Gupta-owned company going as far back as 2006. He has also received bottles of vodka from the Russian ambassador over the past decade. It’s not surprising that the Guptas or the Russians have been a presence in Gigaba’s life; what will take many people by surprise is that the state capture plan and possibly even the wasteful nuclear build programme have been worked on for so long. The raiding of state coffers by President Jacob Zuma and his friends has only become widely apparent in the past 18 months. This followed revelations by people like the former deputy finance minister, Mcebisi Jonas, who alleged that he had been offered a golden handcuff amounting to hundreds of millions of rands to work in Gupta interests. What’s more, Jonas said the Gupta family had approached him to discuss the job of finance minister. The big question now, says Democratic Alliance shadow minister of finance David Maynier, is: What has been left off the Gigaba gift list? – Jackie Cameron

Cape Town – New Finance Minister Malusi Gigaba has received a number of gifts from Gupta-owned company Sahara and the Russian ambassador, dating back from the time that he was an ANC Member of Parliament.

In 2006 and 2007, he received a bouquet of snacks from Sahara and in 2008 a “royal crystal rock bowl” from the same company “in celebration of Diwali”, according to the Register of Members’ Interests.

In 2006, 2007 and 2014 (when Gigaba was appointed public enterprises minister) he was given a bottle of vodka from the Russian ambassador and in 2016, in his capacity as former home affairs minister, he received wine from the ambassador.

At the time of publication, Fin24 had received no response from Gigaba’s office to requests for comment on the gifts.

Democratic Alliance shadow minister of finance David Maynier told Fin24 there is “something suspicious” in the minister’s declarations, as far as gifts from Sahara are concerned.

“I’m less interested in what has been disclosed than in what may not have been disclosed. The minister is open about the fact that he has met the Guptas. But strangely, the Gupta gifts come to an end before he becomes a minister. Something just doesn’t add up here.”

Maynier added that Gigaba seems “pretty cosy with the Russians”.

“Which is a worry, when you think of nuclear.”

Fin24 earlier reported that Gigaba admitted to meeting the Gupta family, but emphasised that they have no influence on the decisions he takes. “As I meet many other business people, it does not mean I have a relationship with them,” he said at a media briefing held on Tuesday.

“Meeting someone does not mean they have an impact on your decisions. Ultimately I take my own decisions.”

He said that he has visited the family and celebrated Diwali with them, as he has celebrated other religious events hosted by other people at their homes.

Since his appointment to the Finance Ministry on March 31, there have been a number of reports about Gigaba’s closeness to the Guptas. The South African Communist Party (SACP) is among a number of entities which believe Gigaba was appointed solely to “do the Gupta family’s bidding at the Treasury”.

In addition, Gigaba is also purportedly in favour of a nuclear build programme in South Africa and Russia is reportedly in a good position to be one of main winners if South Africa goes ahead with its nuclear plans.

The new finance minister said publicly that South Africa’s plans for a nuclear build programme are still on track and the question of affordability is yet to be determined.

He reiterated that the nuclear build programme will be implemented at a scale and pace the country can afford. He also said the programme is part of government’s attempts to diversify the energy mix and make it environmentally friendly in the light of climate change.