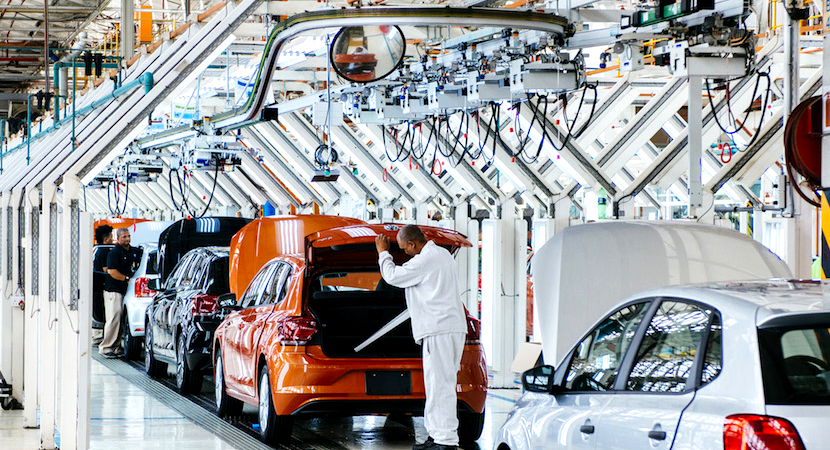 JOHANNESBURG — Greater tax incentives are being mulled by South Africa’s government in a bid to keep major automakers – from the likes of BMW to Toyota and VW – producing cars on our shores. The only catch is that the automakers are expected to double production levels and employ more South Africans. The last part of employing more South Africans could become problematic, especially in an industry where robotics and ever-improving technology are playing a greater role in terms of the motor industry’s production line.  – Gareth van Zyl

By John Bowker and Odwa Mjo

(Bloomberg) — South Africa is proposing automakers including Toyota Motor Corp., Ford Motor Co. and BMW AG more than double production in return for tax breaks so generous that the companies can ship the cars all the way to Europe.

The auto industry accounts for about 7 percent of South Africa’s gross domestic product and has been one of the few highlights of a period of sluggish economic growth, according to the National Association of Automobile Manufacturers of South Africa. That can be put down to a state-incentive program that expires at the end of 2020, which both the carmakers and Trade and Industry Minister Rob Davies are keen to extend for another 15 years.

At stake is a potential reversal of a steady flow of new investment by carmakers. BMW has spent more than 6 billion rand ($470 million) on a plant in Rosslyn, north of Pretoria, and last month started production of the X3 sports-utility vehicle at the site, the first time it’s been made outside the U.S. Volkswagen AG and Nissan Motor Co. both announced major expansion plans in 2015, while China’s Beijing Automotive International Corp. is constructing an 11 billion-rand facility in the coastal city of Port Elizabeth.

With talks under way, the two parties are at odds on a number of issues — especially the state’s targets for what it wants the industry to achieve by 2035, according to Naamsa Director Nico Vermeulen. A production increase over that period to 1 percent of global output, or as many as 1.5 million vehicles a year, is overambitious, he said. South Africa produced about 600,000 units in 2017, the majority for export, and Naamsa forecasts an increase to 850,000 in 2020. 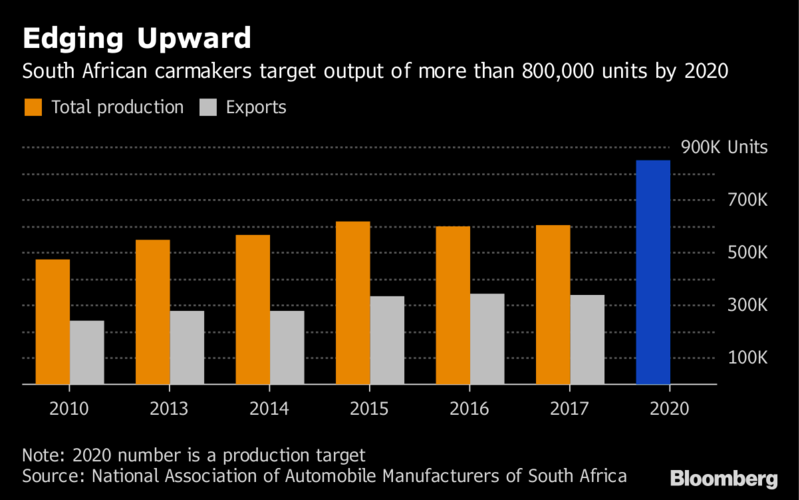 A second point of contention in the negotiations is a government demand for the automakers to double the size of their combined workforce to about 225,000. That’s unrealistic given the global industry’s shift toward robotics and automation, he said. The manufacturers are committed to increasing production and employment if the incentives are adequate, Vermeulen said, but are reluctant to agree to specific targets.

“What we are saying to government is: ‘Let’s work closely together on a program that’s going to keep us active in the country,’” BMW South Africa Chief Executive Officer Tim Abbott said in an interview. “We are a long way from our customers,” he said, referring to export markets. “In a majority of cases we’re about 9,000 kilometers (5,600 miles) away. The logistics costs are much higher, therefore we have to make sure a program is in place that helps us sustain our business.”

Speaking in Port Elizabeth, where Volkswagen is the biggest employer, Trade and Industry Minister Rob Davies said he’s “more or less at the point where we will take a decision as to what the government program will be.” There will be some changes to the present program, such as deepening the incentives related to component manufacturing, though it will build on the present framework, he said.

Losing carmakers would deliver an economic blow to South Africa, which must be careful to avoid a scenario similar to what’s unfolded in Australia, according to BMW’s Abbott. General Motors Co., Ford and Toyota have all closed plants in Australia over the past two years, leading to hundreds of job losses. That was mainly due to a strengthening currency and competition from lower-cost labor markets.

For the auto industry’s role in the economy to be sustained, an upgrade to the existing Automotive Production and Development Programme must be seen by the carmakers as a continuation of existing policy, according to Sam Rolland, an economist at Econometrix in Johannesburg.

“It’s likely that the replacement to the APDP will contain many elements similar to the current policy,” he said in an emailed response to questions. “This is to guarantee that carmakers investing in the country are able to adequately plan production lines, production inputs and workforce requirements.”