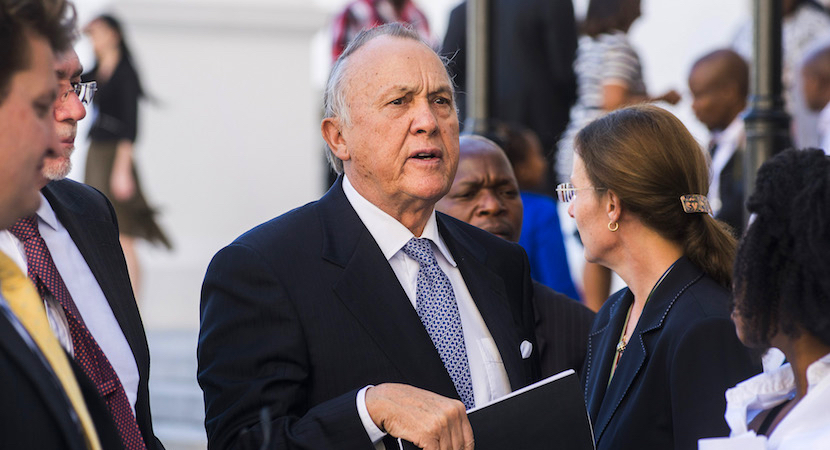 EDINBURGH — Billionaire Christo Wiese has placed more Shoprite stock to raise funds, reports Bloomberg. Wiese has been offloading shares steadily since the Steinhoff accounting scandal erupted. Steinhoff has been teetering on the brink of collapse as a result of its management team cooking the books to facilitate a global acquisition strategy. Christo Wiese is one of South Africa’s most prominent business players. He is suing Steinhoff in connection with the matter through his Titan group. However, questions have also been asked about his role in the chair at Steinhoff. At the very least it seems puzzling that Wiese failed to spot problems in the accounts or ask the right questions to understand how the spending spree was being paid for – and kept throwing money into what has turned out to be a big black hole. – Jackie Cameron

(Bloomberg) – South African billionaire Christo Wiese agreed to a price-protection arrangement on some of his shares in grocer Shoprite Holdings Ltd. that led to banks placing about R3.6 billion ($265 million) of stock.

FirstRand Ltd.’s Rand Merchant Bank and Barclays Africa Group Ltd.’s Absa Capital placed about 17 million shares with institutions at R210 apiece, compared with a Tuesday closing price of R224.89, according to an emailed statement Wednesday (published below). The placement was instigated by one of Wiese’s investment vehicles, Titan Premier Investments (Pty) Ltd., which is Cape Town-based Shoprite’s biggest shareholder.

Wiese has been selling assets to raise money since Steinhoff Holdings International NV, another retailer in which he was the largest investor, announced accounting irregularities in December. The 76-year-old personally sold about R4.2 billion worth of Shoprite shares over three separate deals in the wake of the scandal. He’s also offloaded stock in companies including drugmaker Aspen Pharmacare Holdings Ltd. and investment company Brait SE.

Titan owns about 79 million shares in Shoprite, representing about 14 percent of the grocery chain, and doesn’t expect to make further transactions in the company, according to the statement. The deal was done using a so-called collar transaction, which enables Titan to protect a portion of its Shoprite stake and to better manage its balance sheet, it said.

“Titan continues to believe in the long-term value of Shoprite and will remain a strategic investor in the company,” it said.

Steinhoff stock has crashed more than 97 percent since reporting the financial wrongdoing on Dec. 5, causing a slump in Wiese’s net worth to $2.2 billion from more than $5 billion. He’s suing the owner of Conforama in France and Mattress Firm in the U.S. for R59 billion. Shoprite’s stock has slid 10 percent over the same period, valuing the company at R126 billion.

In late 2016, Wiese had sought to merge the grocer with Steinhoff only for the talks to collapse amid a disagreement over valuations. The billionaire bought into Steinhoff when he sold his Pepkor Holdings Ltd., Africa’s biggest clothing chain, to the company for $5.7 billion in 2015. The retail entrepreneur will remain the company’s biggest shareholder, based on data compiled by Bloomberg.

Rand Merchant Bank (a division of FirstRand Bank Limited) (“RMB”) and Absa Bank Limited (acting through its Corporate and Investment Banking division) (“Absa”) (collectively the “Sellers”) announce the launch of an
accelerated bookbuild offer of up to 17,017,500 Shoprite Holdings Limited (“Shoprite”) ordinary shares (the
“Placement Shares”) pursuant to a derivative transaction entered into with Titan Premier Investments Proprietary Limited (“Titan”) (the “Placement”).

Titan and its subsidiaries currently hold c.79 million Shoprite ordinary shares, representing c.14% of the total issued ordinary shares of Shoprite. Titan has entered into a collar transaction with the Sellers on c.18.9m of Shoprite shares (the “Collar Transaction”). This transaction is part of Titan’s ongoing investment and balance sheet management. Following the Collar Transaction, Titan will have achieved the optimum composition of its balance sheet and no further transactions in relation to Shoprite are contemplated.

Titan believes that it is prudent to manage portfolio risk through this hedging transaction given Shoprite’s concentrated position in its investment portfolio. The Collar Transaction enables Titan to protect a portion of its Shoprite exposure. Titan continues to believe in the long-term value of Shoprite and will remain a strategic investor in the company.

The Placement Shares represent 2.9% of the total issued ordinary shares of Shoprite. The Placement is being made to qualifying institutional investors only and is not an offer to the public in any jurisdiction. The book for the Placement is open with immediate effect and is expected to close as soon as possible. Pricing and allocations will be announced as soon as practicable following the closing of the book.

RMB, Absa and Morgan Stanley & Co. International plc are acting as joint bookrunners (the “Joint Bookrunners”) for the Placement.