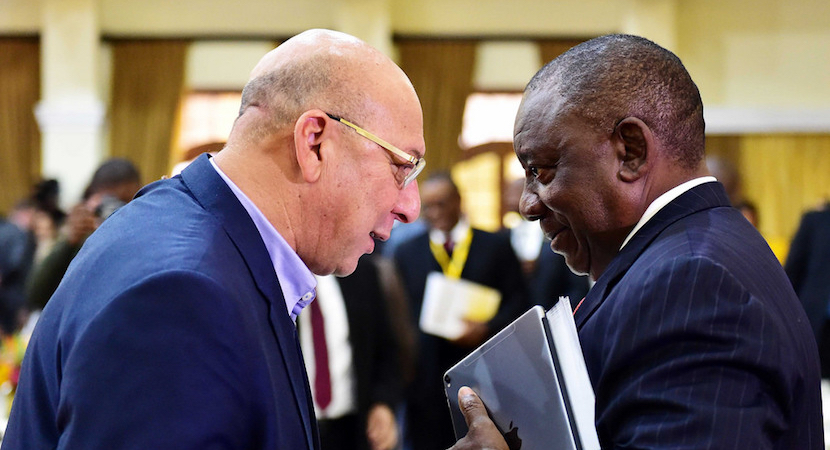 CAPE TOWN — There’s good reason why SA’s long standing former Minister of Finance, Trevor Manuel (1996-2009) was the darling of the global finance community. Not only did he help produce a national budget surplus in 2007 but his forthright and decisive manner had him declared “Global Leader of Tomorrow,” by the World Economic Forum in 1994 while the International Monetary Fund appointed him chairman of its Governance Reform Committee in September 2008. Then, suddenly, his political fortunes waned as the star of Zuma and his Zuptoids ascended, culminating in the captured Hawks gunning for him when his outspokenness against the corrupt new order got too loud. So, when Trevor says that foreign investors are wary of land reform in South Africa and raises red flags about property rights and food security, it’s worth sitting up and taking notice. He’s not sucking it out of his thumb. He’s one of the dominant reformist cabinet faction’s four investment envoys tasked with attracting R1 trillion worth of international investment over the next five years. He just returned to tell journalists that the land question is proving a very tough sell. – Chris Bateman

Manuel, one of four investment envoys appointed by President Cyril Ramaphosa tasked with attracting $100 billion of foreign investment to the country in the next five years, has found explaining the country’s land debate to foreign investors tougher than expected, the Johannesburg-based newspaper reported.

Lawmakers started a process to change the constitution to allow for expropriation of land without compensation in February after the ruling party decided last year to adopt the measure as a policy to speed up giving black people more land.

It’s fair to say that as finance minister, Trevor Manuel was not afraid to take unpopular stances. For much of his tenure, he was the lightning rod for the ire of many within his own party and his alliance partners, for whom he signified the ANC’s turn to ‘neo-liberalism’. Tough choices perhaps, but he oversaw steady growth in the economy – between 2005 and 2007, it averaged 5% a year. We can only dream of that now.

Mr Manuel is to be congratulated for his remarks about South Africa’s ‘land debate’, presumably referring to expropriation without compensation. As one of President Ramaphosa’s investment emissaries, he has found explaining it ‘a bigger challenge than what we thought’.

Diplomatically framed, this will hopefully open up some discussion of the matter. Degrading property rights will be a disincentive to investment – our experience at the Institute of Race Relations is that the prospect of so doing is already having a negative effect. It is not something that can be ‘explained’ away.

Indeed, Mr Manuel and his fellow emissaries are likely to be confronted not only with concerns about future policy of expropriation without compensation, but with actions already taken. Notable, here, is the termination of various bilateral investment treaties.

It is deeply concerning that despite the dire need for investment in the economy, and despite government’s rhetorical commitment to fostering a hospitable investment climate, some of the greatest obstacles confronting South Africa’s future arise from government’s own choices and actions.

One can only hope that there is a willingness to change direction: warnings about the destructive impact of existing and proposed policy have long been sounded. For the sake of South Africa’s future they need to be heeded.