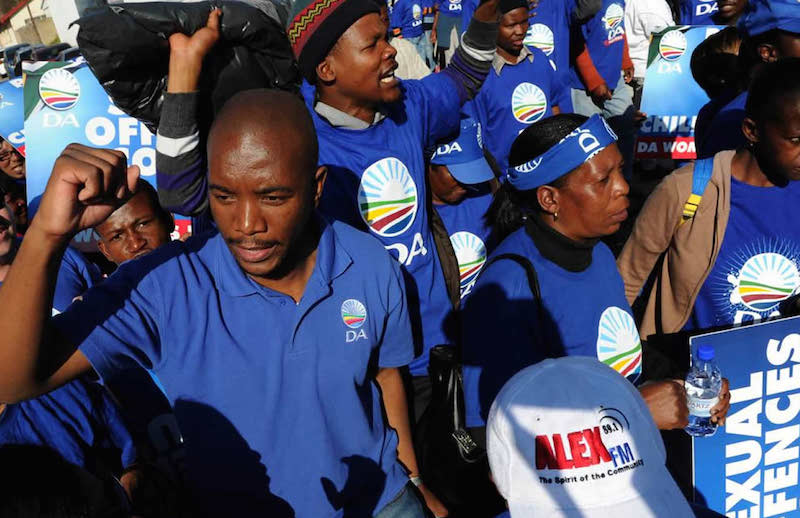 It’s been some years since I had the opportunity to share some quiet words with the former Democratic Alliance leader Helen Zille – a colleague during our time at the Rand Daily Mail newspaper. I was a fan of her work at the newspaper (in the early 1980s) and remain one to this day. Zille the politician shared that there were some extraordinary young people coming through the ranks of her party, and that it wouldn’t be long before the demographic makeup of its leadership reflected that of South Africa itself. Because only once it shed the yoke of being perceived as a “white” party, Zille said, could the DA be regarded as a viable alternative to the ruling ANC. With the election of its young black leader Mmusi Maimane, Zille’s forecasts are starting to be fulfilled. What follows below is how the world’s three major news services – Bloomberg, Reuters and AFP – covered the news. The Soweto-born Maimane’s youth is a focus. As is his demographic. But perhaps the most significant part is that the DA is now, indeed, an alternative to the ANC Government. Read more about Maimane’s plans in the excellent interview with Tim Modise, his first as the new DA Leader. – Alec Hogg

(Bloomberg) — Mmusi Maimane overcame three rivals to become the first black leader of South Africa’s main opposition party at the age of 34. His next aims are to wrest support from the ruling African National Congress in municipal elections and hold President Jacob Zuma to account for a corruption scandal.

Maimane was named successor to Helen Zille, who’s retiring as Democratic Alliance leader after eight years, at a party congress in the southern town of Port Elizabeth on Sunday. The DA is looking to Maimane to attract more votes from black citizens, who make up 80 percent of the population yet accounted for 15 percent of its support in last year’s national elections.

“Maimane’s election is symbolically important,” Daniel Silke, director of Cape Town-based Political Futures Consultancy, said by phone. “It does make the DA’s leadership more representative and will enable it to take the ANC head-on. At the same time there is no guarantee that having a black leader will translate into more black support.”

The ANC, which is still widely credited with ending apartheid rule, has won more than 60 percent of the vote in every election since it took power under Nelson Mandela in 1994. While the government has boosted access to welfare grants and AIDS drugs, 24 percent of the workforce remains jobless, 22 percent of the population of 54 million doesn’t get enough to eat and white households on average earn six times more than their black counterparts.

The DA, which was founded in 2001 and won 22 percent of the vote last year, will aim to retain control of Cape Town and oust the ANC in Johannesburg, Pretoria and Port Elizabeth and other towns in next year’s local government poll, Maimane said.

“Our goal is to win support from voters of all races,” he said in his victory speech. “We will stand firm on our commitment to implement policies that redress the legacy of the past. We will push for measures to grow our economy and create jobs. We will position the DA as the party of tomorrow. We will connect with voters on the basis of shared values.”

Maimane also pledged to pursue a lawsuit aimed at ensuring Zuma is prosecuted for taking bribes from arms dealers. Charges against Zuma were dropped just weeks before he took office in 2009. The president has denied any wrongdoing.

“President Zuma, if you are watching, please note we are still coming for you,” Maimane said to loud applause from delegates. “Nobody is above the law. And equally so, no political party has the divine right to rule this country.”

Maimane is a former lecturer who holds a masters degree in public administration. He joined the DA in 2009 and served as the party’s caucus leader in the city of Johannesburg before being appointed its parliamentary leader last year — a post he intends retaining. Zille remains premier of the Western Cape, the only one of the nine provinces not controlled by the ANC.

“Mmusi gives us hope,” said Olwethu Ntame, a councilor from the southern city of East London, who wore a blue t-shirt bearing Maimane’s image and campaign slogan “Believe in tomorrow.” “He can stand in front of any crowd and connect. We want leaders who have ideas. Race is not important. The DA has transformed a long time ago.” – Bloomberg

The party hopes the move will widen its appeal in a country deeply divided along racial lines despite the fall of apartheid more than two decades ago, with most of the black population living in poverty.

Maimane, 34, who begun his victory speech in his native Xhosa language, told delegates his priorities would be fighting for a fairer society with equal opportunities for all.

“We can transcend racial inequality, but this can only happen if every South African acknowledges the injustices of apartheid and if we all recognise that racial inequality of the past still remains with us today,” Maimane, who was born in the black township of Soweto in Johannesburg, said.

The DA’s leader of eight years, Helen Zille, 62, stepped down after leading the party to win 22 percent of the vote in the 2014 national election, its best performance. Ruling party and former liberation movement African National Congress won that poll by more than 60 percent.

Some critics accuse the DA of being “lily white” and not fully committed to addressing inequalities, including not supporting an affirmative action law that requires companies and institutions to increase the number of blacks in their ranks. One in every four South Africans is jobless.

Some analysts said Maimane’s selection would not automatically rope in the young, urban working-class black voters that it has been targeting, unless they see the party addressing their concerns.

“They have chosen him because they think that having a black leader will be more attractive to black voters. That way of thinking is not the most productive,” said Steven Friedman, director of the Centre for the Study of Democracy at the University of Johannesburg.

“If it doesn’t change anything, if it is still saying the same things and taking the same policy positions, then many black people will say, ‘This is a white party led by a black person’.”

Maimane’s rise to prominence began in 2011, when he became the party’s national spokesman. Last year, he lost his bid to lead the provincial government of South Africa’s richest province, Gauteng, but shortly afterwards became his party’s parliamentary leader.

“I simply don’t agree with those that say they don’t see colour, because if you don’t see that I am black, then you don’t see me at all,” Maimane said.

By Sibongile Khumalo of Agence France-Presse

South Africa’s main opposition party, the Democratic Alliance, on Sunday elected its first black leader, a major step in its bid to present itself as an alternative to the ruling African National Congress (ANC).

The DA, which has been widely seen as a party of middle-class whites, won 22 percent of the ballot in last year’s general election and is looking to broaden its appeal among black voters, two decades after the end of the apartheid regime.

Mmusi Maimane, aged just 34, joined the DA in 2009 and was fast-tracked through the ranks by Helen Zille, who stood down as party leader after eight years in office.

Zille did not publicly endorse Maimane, but he was the clear favourite to win the secret ballot.

“I don’t agree with those who say that they don’t see colour — because if you don’t see that I am black then you don’t see me at all,” Maimane told cheering delegates in his victory speech.

“Many young black South Africans continue to be denied access to opportunities, just as their parents were during apartheid — this is what we must change if we are going to succeed as a nation.”

At the end of his speech he paid tribute to his white wife Natalie, who joined him on stage as he received a standing ovation.

Sunday’s vote marked “a milestone for the DA and South African politics”, according to an editorial in the Sunday Times.

“For much of the past two decades, our political contest has been a black-versus-white affair, with the ANC seen as the party of the previously oppressed and the DA as a party of white interests.”

Raised in Soweto, the heartland of anti-apartheid resistance, Maimane broke away from his family’s ANC roots to join the Democratic Alliance.

Last year he was elected the party’s leader in parliament, where he has often locked horns with ANC lawmakers and President Jacob Zuma.

The DA has been pushing for legal action against Zuma over corruption allegations, and Maimane vowed to succeed in this pursuit.

“Make no mistake Mr President, you will have your day in court,” he told the racially mixed audience.

“Nobody is above the law. And, equally so, no political party has the divine right to rule this country.”

The ANC, which has ruled since 1994 when anti-apartheid icon Nelson Mandela became president,  and remains the dominant force in politics, faces tricky local elections next year when the DA hopes to benefit from the government’s poor economic record and high unemployment.

But the radical leftist Economic Freedom Fighters (EFF) party is also on the rise, seeking to gather votes from working-class blacks frustrated with a lack of progress under the ANC.

In her farewell speech on Saturday, Zille said the selection of a new party leader would be “a turning point, not only for the DA but also for South Africa”.

Zille, 64, announced last month that she would be stepping down.

“Her resolute commitment to diversify the party’s leadership, membership and support base was one of the reasons we were able to double our votes in her eight years as leader,” Maimane told the party’s annual conference in Port Elizabeth.

The DA prides itself on liberalism and equal opportunity — as opposed to the affirmative action policies advocated by the ANC to overcome the legacy of the racist apartheid era.

The party has its roots in the now defunct Progressive Party, co-founded by the late anti-apartheid activist Helen Suzman in 1959.