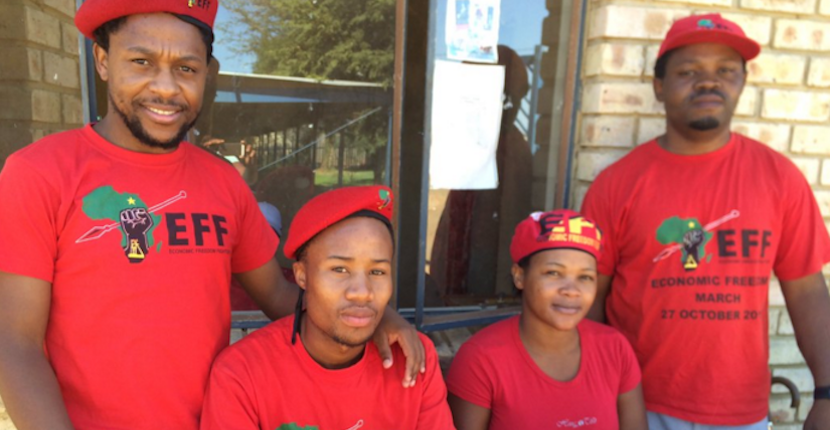 Journalist and broadcaster Tim Modise is well known to the Biznews community. He recently partnered with Soweto TV, hosting a weekly showed called Tonight with Tim Modise. In one of two in-depth interviews, first broadcast on the show, Tim sits with Mbuyiseni Ndlozi, spokesperson and youngest member of the Economic Freedom Fighters. He also spoke to former Finance Minister Trevor Manuel, who joined other ANC stalwarts calling for oath breaking President Jacob Zuma to resign. The interview looks at the Constitutional Court’s Nkandla judgement and how the ANC’s failure to act on it is self destructive. Ndlozi sets out the EFF’s strategy moving forward. – Stuart Lowman

Tim Modise: The Constitutional Court took a decision this past week, where it made a ruling that President Zuma had to pay a portion of the undue benefits that went to him, as a result of the Nkandla affair. This is a move and a ruling by the court that has led political parties, opposition parties in particular, to call for the President to step-down. Well, that matter has been contested and as we speak, the ANC itself is meeting and discussing the way forward, for the organisation. The President has since apologised and has made a promise to pay back a portion of that money and he will be staying on it appears, for some time but the opposition parties seem very, keen and bent on removing the President through the Parliamentary process. I’m now joined by Mbuyiseni Ndlozi, of the Economic Freedom Fighters, to talk to us about what the EFF is going to do next. Mbuyiseni, it’s a pleasure to have you with us once again.

Very dramatic weeks and times, we’re living here, in South Africa. Not so long ago, we spoke to you ahead of the NEC of the ANC, and you said not much was going to happen. The Constitutional Court has ruled and I will be getting a reaction from you for that. Let me start first with the very, latest news I hear about your commander in chief, Julius Malema, the leader of the EFF. What happened to him in Sandton last night?

Well it was after the preparation meeting for the manifesto launch in Soweto that we had yesterday evening, as you said, and upon separating there, he drove onto the highway. When he off-ramped into Grayston Drive traffic lights, an unmarked white van stopped him and then immediately they were like no less than ten police cars that isolated him. Some stopped the traffic, others coming out with guns and rifles, forcing him out of his car. The CIC came out and shouted at them, and got back to his car, and drove off, through the pavement and that was it.

Look, we take it as a clear act of intimidation, as the EFF that is we’ve always received information about how the security forces are being set up against the movement, so we’re taking it as a clear act of intimidation, where the CIC is clearly being targeted. The criminal charges couldn’t succeed. SARS couldn’t succeed to subdue him from waking up the people of South Africa, against the injustices but we also want to communicate that once shaken, I mean we are talking about Comrade Julius Malema, his bravery is stronger than ten million armies, so make no mistake to think that we will be moved an inch. We are prepared to defend the rule of law in this country. We are prepared to defend the Constitution, using whatever revolutionary means possible, and there are no charges we are going to press. We can’t go to the same people to ask for justice from them. What we will do is to constantly, keep the public aware of each, and every incident and act of intimidation, so that when we do respond, the day we have to, it is not thought as irrational.

Now, let’s go back to the bigger story of the week, the Constitutional Court ruled in the way that it has, saying the President must pay back the money and that the powers of the Public Protector have now been clarified and has called on the National Assembly itself, found that they had violated part of the Constitution. What do you think the next move should be? The President has since spoken. The expectation was that he might step down, which he didn’t. He just said he’ll pay back a portion of the money.

It means that we have a person here, who undermines the intelligence of the South African people and thinks that he will take platform and say ‘all the lies’ and continue like a mythomaniac, a pathological liar, and thinks that all of us, therefore cannot understand. He must be removed. The evocation tomorrow, in Parliament, is of Section 89, which is different to all other motions of confidence, which are based on Section 102, if I’m not mistaken, and it has never been tried before. Impeachment has not been tried. You will remember an example of impeachment is Bill Clinton, in the case of Monica Lewinsky. Basically, the Parliament must try Jacob Zuma, and if removed through that clause, is relegated to the streets, as an ordinary South African. He loses all the benefits. He loses everything that President Mbeki enjoys. That de Klerk enjoys or any other former president, as well as Kgalema Motlanthe. That’s what this clause means. It may not succeed because the caucus and the ANC no longer have a collective conscience. They rule in the interest of protecting Zuma and Zuma alone. Zuma is the ANC. They can protect Zuma and let South Africa be destroyed. They can even protect the ANC and let South Africa be destroyed, so it’s possible tomorrow that that caucus, in Parliament, will not give impeachment, which means we’ll have to go back to court.

The ANC has, more or less pronounced on where it stands on this matter through the Secretariat General anyway, on Friday after the President apologised and gave the public speech that he did. They’re saying that the efforts on the part of the opposition parties, EFF included, DA and others, are to tear the ANC apart. That your intention is to destroy the ANC, in other words, it’s not as noble as you position it to be. That their intention is to protect the Constitution but what you’d like to see is to see the ANC tearing itself apart.

These are old men and women who are possessed of lies. We did not send Zuma to go and steal the peoples’ money. We did not send Zuma to go and defy the Public Protector’s remedial action. We actually advised him, in Parliament, as the duty of Parliamentarians, in us holding him accountable. We said to him, “You’ve got to pay. You’ve got to pay, and if you don’t you are going to break the Constitution,” the Constituted Committee and Ad Hoc Committee, after the other to drive down the throat of a legitimate system, an unconstitutional resolution. We didn’t ask them to do those things. We even told and advised the ANC, in Parliament, do not take a resolution that says ‘you are overturning the remedial action of the Public Protector’ it would be unconstitutional.

What we are having here are old men and women, who are possessed so much of lies, they are no longer able to be truthful. If there is anybody that is destroying the ANC – it is the ANC. It is unmaking itself. It is a beast that is now eating itself apart. That’s what it is, and therefore all we are asking is let there be the rule of law.

Well, the Speaker of Parliament has also spoken and said that she accepts the ruling by the Constitutional Court but that she’s not going to apologise to the Public Protector, for instance. She was asked a question if she’s going to Chair the Parliamentary Session and she said she will be there and she’s not going to recuse herself.

Well, I mean Baleka Mbete’s Constitutional illiteracy has been demonstrated over a long period of time. She is incapable of understanding the obstruction, called the ‘Rule of Law’. There have been multiple mistakes of Parliament that has been corrected in a court of law, so I wouldn’t expect any coherent and intelligent reading of the judgement in anyway. However, Parliament itself needs to come, as well to the admittance to admit that the implications, as the Commander in Chief has said, of the judgement on Parliament is such that Parliament must dissolve. If Parliament has broken the Constitution, Parliament itself must dissolve and let South Africans be given an opportunity to elect new people, who will not go and break the Constitution.

After impeachment, proceedings there will be an Acting President. Parliament must dissolve. The Acting President must call an early election. Preside over that period until we begin a new leaf. If we don’t do that, we’ve moved into a beyond, in which the warm heart of a long, fought for Constitution would be buried, in a cold, abyss of lawlessness.

But now as much as your intentions as the opposition parties has to do the things that you are mentioning now, that is not possible because the ANC enjoys a substantial majority in Parliament.

Much appreciated. Thank you. Well, there you have the EFF’s position. They will be taking part in Parliament tomorrow, to see if they can impeach President Zuma. The argument that we’ve heard is that it’s not just the opposition but also some sections, members of the ANC, and the most senior, influential people at that, who are also suggesting or proposing to the President that he should step down. We’ll see what happens tomorrow.