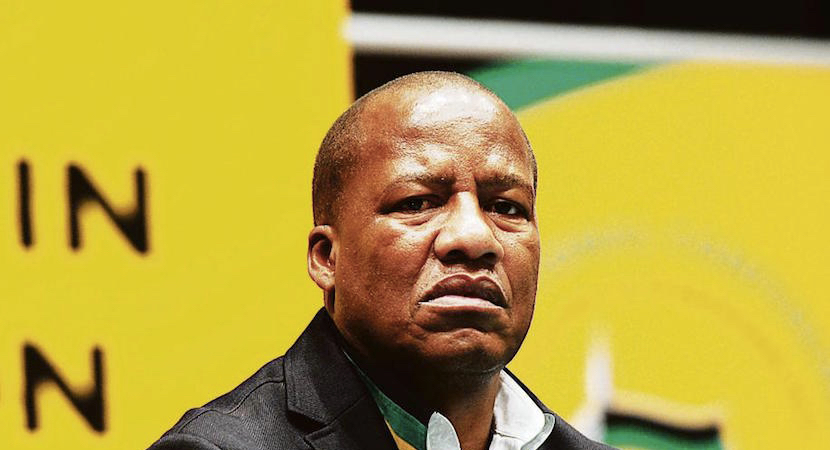 Well, there we have it. If ANC chief whip Jackson Mthembu’s outspokenness is anything to go by, we really do have a separation of powers between parliament and the executive, with the former holding the latter accountable – at least in this case. In a refreshing interview, totally in character with his comments over the past few years, Mthembu seems intent on pouring a bucket of cold water on the Zuptoids bathing in the warm soporific riches acquired at the expense of service delivery and the poor. He may not put it quite that bluntly but that’s the unavoidable message. Wake up! he screams. You may not seem to care about a better life for all, but for goodness sake, the continued survival of your party at the helm of this country is at stake. Just wake up from Lovely-Lolly Lalaland and smell the wilting roses. What he didn’t (and couldn’t) add was that it’s in their own self-interest that the Zuptoids ‘wake up from their sleep in the egg-shells’ (as in Vuka Emaqandeni!). They’ve already got egg-yolk all over their faces (not that they care), but at least, “get us out of this mess you’ve created. Ask not what your party can do for you, but what you can do for your party – just this once. Please? Help me get Cyril in – or we lose the baby, the tub and the bathwater!” – Chris Bateman

(Bloomberg) – The chief parliamentary whip of South Africa’s ruling African National Congress threw his support behind Deputy President Cyril Ramaphosa as the party’s next leader and said the ANC is in danger of losing national power in two years.

While the ANC has told its members not to publicly discuss the race to succeed President Jacob Zuma as party leader, Jackson Mthembu said Ramaphosa’s position as deputy means he must become its next president. Ramaphosa’s main rival for the job is Nkosazana Dlamini-Zuma, a former cabinet minister and the president’s ex-wife who just ended her term as chairwoman of the African Union Commission. As chief whip, Mthembu leads the ANC’s 249-member caucus in the 400-seat parliament.

“The ANC created the position of deputy president precisely so that you have a person who is ready to take over should anything happen to the president,’’ Mthembu, 58, said in an interview in his parliamentary office in Cape Town. “As an ANC member, I put such a person to be deputy because I was preparing that person to be president — case closed.”

The debate over the party leadership comes at a time when the ANC risks losing power in general elections in two years, Mthembu said. It’s worst-ever electoral performance in August municipal polls saw it cede control of the economic hub of Johannesburg and the Tshwane municipality, which includes the capital, Pretoria. Its share of the national vote fell to 54.5 percent, a 7.7 percentage point decline from general elections three years ago, and another drop of that magnitude in 2019 could relegate it to the opposition.

“It’s only a fool who will not see that reality,” Mthembu said. “Never in my wildest dreams, or never in any of my nightmares, did I dream that we can lose Tshwane, we can lose Johannesburg.”

The ANC, which has held power since South Africa’s first multiracial elections in 1994, is riven by factions and is failing to respond to the needs of the poor and deliver sound economic policies, he said. A number of members of the caucus Mthembu leads hold key positions in ANC bodies that will determine who replaces Zuma.

“The ANC must approach this election as a step for self correction,” he said. “We must come out ready to confront in a meaningful way the malaise that is facing our organization.”

Partly because of the ANC’s 62 percent majority in Parliament, Mthembu said that in the past the caucus has been soft on the cabinet. He criticized how party lawmakers and ministers rallied around the president after the nation’s graft ombudsman found that taxpayer money was used to pay for a 215 million rand ($16 million) upgrade of Zuma’s private home.

The Constitutional Court ruled in March that Zuma violated the law by not abiding by her recommendation that he repay some of the money, and ordered him to comply.

The problem is some members of the ANC are focused on retaining power for themselves, Mthembu said.