Paul Kent is MD of Sureswipe, a servicer of retail outlets with more than 7,000 independent retail customers. They make things easy for retailers – accounting, reconciling, reporting – thus freeing time to focus on the business. The hardware of card-swiping technology is pretty commoditised – it’s the combination of apps that constitutes the intellectual property and is giving this company strong growth prospects in a field traditionally dominated by banks. – David Williams

I’m with Paul Kent, MD of Sureswipe. Perhaps before we talk about swiping, consumers, retailers, and how digitalisation has changed the way people shop just give us a context and tell us about Sureswipe, where it’s come from, and what it is.

Good afternoon. Sureswipe started around 2008 when we came to market. Really, at the time, a lot of the independent retailers had two main problems. (1) When they went to the bank to get a credit card machine, it was very expensive. Fees between four and six percent at that time were very common in the market. (2) When they had their business up and running and wanted to get a card machine, it usually took 30 days for someone to come out and see them. Then, if there was a problem with the machine, it took about seven to ten days for the bank to come out and fix it. We came to the market with two very simple things. We had a very innovative pricing model where, as people’s revenues started or turnover increased, their fees automatically came down. 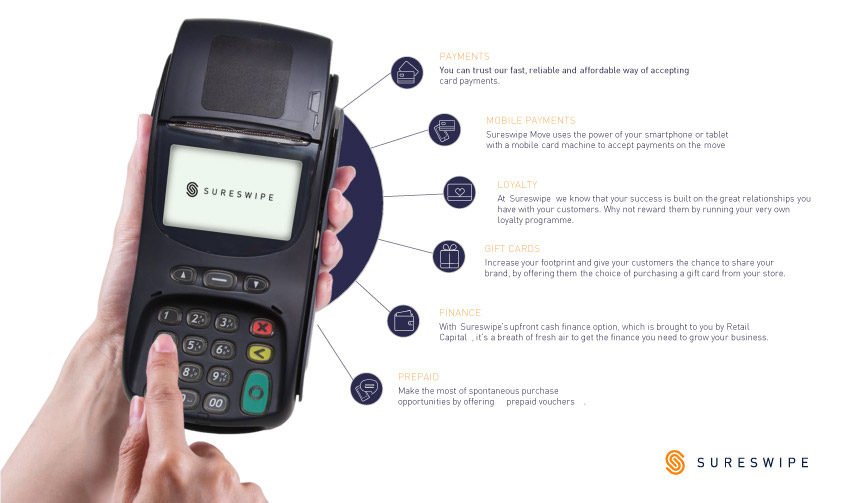 At that stage, we would have something installed in your store within ten days and if there was a problem, the next day we’d have someone on site to fix it. Really, in that independent retail space, we came into the market and solved those two problems. Since then, we’ve grown into a substantial business in what we call ‘a payment service provider’ and we currently have around 7000 machines in the market.

Just give us an idea of how the growth path went. Presumably, you start with one customer. You have to service that customer, look after him, and discover what problems there are.

Certainly. We were quite fortunate. Our sister company Healthbridge had a large base in the doctor market so we initially started in one sector, and that was into the doctors. We quickly established about 350 clients. At that point, we went to a broader market. Growing from 20 or 30 clients per month, within three or four months we were up to 150+ sites signing up for Sureswipe. Then we outsourced some of our key functions quite soon, we realised that the critical element to the business is really around what we call the customer touchpoints. Quite quickly, we’d outsourced our call centre. We’d outsourced some of our technicians on fixing things but quite quickly, we decided to bring those in-house because those were the Sureswipe people who had that little bit of magic that we had when interacting with customers. We went with this philosophy ‘if it touches a client, it must be a Sureswipe person’.

That’s a philosophy, which I think a lot of companies should imitate. How so you spread the word? You’ve got a customer or two but they are very preoccupied with what they do in their world. Now you improve their world but they may not tell anyone else about it. How did you sell and market this to other people who needed it, but perhaps didn’t know about it?

In this space, apathy is probably our enemy because although people are unhappy with the service they get from their current service provider, it’s quite a pain to go and chain – to go through contracting, FICA, and getting all of those documentations together. It was quite difficult in the early days. Probably in the first three years, of the new revenue/new growth in terms of clients, at one stage probably 30+ percent were referrals from existing clients so we have a few channels to market. (1) We’re dealing with people’s money and we really believe that if you want somebody to trust you with their money, they need to look you in the eyes. We’ve got a very big distribution network of salespeople that are out, doing it the old-fashioned way. Knocking on doors, and going to talk to the business owners (in particular, in retail stores).

So, the old-fashioned hard slog of getting out there and getting the name out…

Yes. That’s exactly how it is. We have some great channels to market but there’s no substitute for some hard work from our sales team.

I’m thinking of these technologies where we had Uber, for example. Its great advantage wasn’t necessarily that people couldn’t copy their technology. It’s that they got their first. Eventually, others will copy them and replicate the technology, but they’ve got such a big market share already. Do you have intellectual property or proprietary technology that could be copied but hasn’t been yet, or would be difficult to copy and meanwhile you’re gaining market share?

Well, the payment space is pretty commoditised. If you think of it as an enormous credit card machine that’s lying there, you can buy from three or four suppliers (maybe more) around the world. You need a lot of cards in issue, whether it’s a physical card on the wallet or on a mobile device, those cards need to be issued. The product itself is commoditised. What we’ve really built a lot of around that is what we call on-boarding or sales app, so we simplify the process when you sign up a client. That’s where we’ve built our IP – around the on-boarding and then, the customer service. Workflow processes: we’ve got systems in place that we use and those systems are off the shelf sometime, but it’s how you package them together to be very, very effective on how you service customers and how you sign up customers.

That’s exactly it. The other part that’s very difficult to replicate is that I think we have a great ethos from a people point of view. They really do care about the customers. They really burn for those independent retailers and that’s something that can’t really be replicated.

The big retailers are really tied up with some major banks and I don’t think there’s a space for us at this stage where we would be able to offer something that’s very different.

Couldn’t you do a Virgin Active or a Virgin type of thing, of disrupting the big banks’ services by offering something that’s cheaper and faster etcetera?

Well, we do that but we do it to very specific clients because that’s what we call the independent retailers. (1) They’ve had a real hard deal for many years where, to be quite frank, the banks have probably taken more money in their bank fees than the hard workers at the independent retailers take home. I think there was a lot of disillusionment between those independents/business owners and we were able to step in and challenge the banks to offer something where we could offer something better at a cheaper price. We really focused our attention to those independent retailers (what you call the mom & pop stores) where we’re talking directly to the business owners and we really understand where the pain points are and what’s really difficult about dealing with the big banks, and we were able to come in and make a difference there. 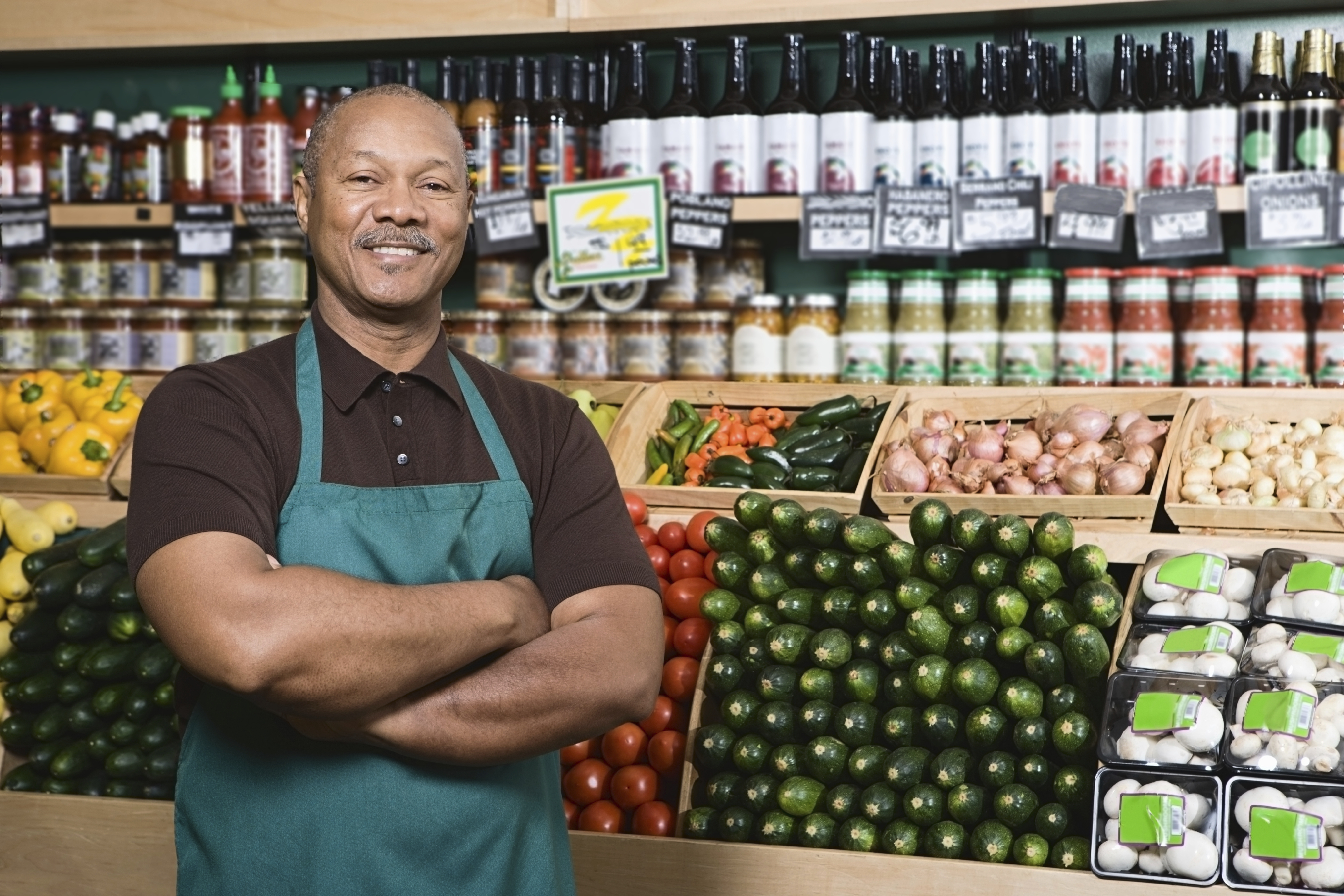 I see that strategically, from a bank’s point of view; if you’re good at what you’re doing, you get better at it, and you take all this business in (what you call the independent retail market), a bank might come to you at some point and say, “Can we make a deal here?”

Well, this is a highly regulated market so we’d have to comply with the Payment Association of South Africa and other regulations so we need to work with the bank. We have a sub-license so we deal with a bank to acquire that license.

Paul, what was your route to this? How did you get into this business?

Well, I always say I’m a bit of a retailer at heart. My grandfather had a little store so as a kid, growing up, I always remember working in his store – serving customers, using the till (and I guess that’s where I learned to count). Since then, I was actually in business development working with the Group company. We were majority-owned by a company called Tradebridge and I’ve been with the Tradebridge group from 2001 – about 15 years. It was a very much more entrepreneurial road into Sureswipe and we founded the Healthbridge business in 2008.

Your academic qualifications and that kind of training…

Yes. I came out of a Government school in Kempton Park. I went through Wits Business School’s Management program in 2003 and then more recently, I’ve done an MBA through the IE Business School in Madrid.

We see a lot of activity in the payment space and really, what’s coming down the line is lots and lots of choices for the consumer. As somebody going out to spend my money, I can spend it via a digital wallet, Samsung Pay, Apple Pay, Zapper Snap Scan, and Flickr. You’ve got lots and lots of choices of how you’re going to spend your money or how you’re going to store your money for spending in store. There’s been a lot of thought around the consumer. Where this thought has been lacking is really, around “What is the impact that this is going to have for a retailer and more particularly, for an independent retailer?” Right now, if I’ve got a retail store and I actually want to have multiple cu rrencies or multiple ways to pay, I need to contract with three, four, five, or six service providers.

When I get my reconciliations and payments made, I get five or six different recon files so the administrative burden for the retailer is exponential complexity. At Sureswipe, we can play an amazing role and position ourselves in front of all of these payment methods where we can simplify it down to the retailer. Simplify their lives, make the reconciliation easier, and take away the administrative burden.

Acquisitions: you’ve done an acquisition of a company called Concorde. What’s behind that?

Concorde Solutions has a processor so they were switched and they’ve got some great technology – what is integrated into some of the Point of Sale software vendors. Vendors like Micros, GAAP, and Pilot have got integrations directly into that software so the credit card transaction doesn’t go through a stand-alone device. It is driven form the Point of Sale software so it does a few things. (1) It opens up a little bit of a new target market for us – very popular in franchise stores and those sorts of businesses. Integrated Point of Sale is much quicker from the transaction speed. If you’re in a high-volume business, you need integrated. (2) Since it’s driven from the till point, it reduces risk of fraud at the retailer. Fraud is still a big issue in South Africa and around the world (credit card fraud) so it does reduce risk of fraud at the retailer. (3) Since it’s all integrated into the Point of Sale software, the reconciliation and administration becomes even simpler.

We think we’re solving great problems in South Africa and other countries are having similar problems so the IP that we’re putting together, the end-to-end platform (what we call from cradle to grave) of the retailer…we’re probably 12 to 18 months away, but we certainly have plans for going abroad.

Sounds great. That is Paul Kent, MD of Sureswipe.