Mobile network Vodacom posted another set of solid annual results with the company reporting further subscriber growth, group service revenue growth of 2.3% and an increase in headline earnings per share (HEPS) of 4.5%. But it was the company’s announcement that it is taking a 35% stake in Kenya’s biggest mobile network Safaricom that sparked market interest on Monday. The move is set to turn Vodacom into a major financial service player in Africa as Safaricom has the world’s biggest mobile money user base. While M-Pesa has been a raging success in Kenya, the mobile money platform has previously flopped in South Africa. But Vodacom CEO Shameel Joosub told BizNews that if his company applied for and won the local Sassa contract, this alone could dramatically revive and awaken M-Pesa in Africa’s most developed country. – Gareth van Zyl

I’m with Shameel Joosub, the CEO of Vodacom, here at the Johannesburg Stock Exchange in Sandton. Vodacom, which is South Africa’s biggest mobile network by subscribers, today released its annual results for the year ended 31st March 2017.

Shameel, it’s a solid set of results, group service revenue up 2.3%, headline earnings per share up 4.5% but most interesting of all your company set to have a 35% stake in Kenya’s Safaricom.

Very much so. I think a very pleasing set of results for us, against what I would call a tough economic backdrop and, also a lot of currency fluctuations across the continent and, also a stronger rand, surprisingly enough, compared to last year which has a negative impact on our results because of the translation effect. Whereas last year we would have gotten the positive from that but you know overall, very positive and from M-Pesa in our territories, from data growth, so one is quite pleased with what I would call a solid set of results.

In terms of the new transaction, I think very exciting. Safaricom is a prize asset on the continent. It’s a high growth market, high value, high financial services. Obviously, the blueprint for M-Pesa across the continent, across the world, so a very exciting transaction for us. (Kenya’s) penetration levels: lower than South Africa. (Kenya also has) high growth rates, economy growth rate is 6% plus. I think a really exciting opportunity for us.

Yes, I think to put it into perspective, we shut it down in South Africa but we’re growing significantly across our markets. We have almost over R2bn of revenue in transaction fees generated from M-Pesa in our midst, so really quite a significant part of our business now. Together with Safaricom it makes us probably one of the most formidable financial services players on the continent, if not the biggest. It’s really a transformational part in that respect. I think in South Africa, we still want to further our financial service agenda but we’d do it differently. I call it the ‘cherry picking approach’ where effectively, we’ll look at the services that we provide through M-Pesa and we’ll ‘cherry pick’ some of those services to offer in the South African context. 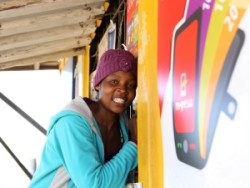 I think the South African context, and when you look at M-Pesa and you look at it across the continent. The recipes for success if you think about it is low bank penetration, and that helps to further the growth. Also, your regulatory environments play a big role. Now, in South Africa there were a couple of issues I think. Firstly, regulation is much tougher. Secondly, you’ve got a much bigger footprint in terms of banking infrastructure, if you like. Thirdly, you have something like the social grants, which is paid into a debit card. The market that you’re trying to attract would have been the bottom end of the pyramid or the people who are getting social grants, so they already have a banking solution in place, through the social grants, which is exactly the spot in which mobile money would have had to play in South Africa. That’s why we and some of our competitors have shut it down because it didn’t get the necessary attraction because that market was already penetrated by the SASSA cards, if you like.

I think previously there was talk that Vodacom was possibly interested in that SASSA contract. Looking forward, would Vodacom look to social grants perhaps?

If the SASSA tender came up, it’s certainly something that we have all the capability to do. Remember the M-Pesa platforms and so on, are still all live in South Africa, so we still have the full capability to do it. But that would make M-Pesa successful, so yes, if it came out to tender we would definitely consider it cause it is certainly something that we’ve done around the world and that can be successful.

Also, Vodafone now has an almost 70% stake in Vodacom. How does that change the dynamic?

It doesn’t. I think it’s business as usual.

So even though they have a bit more of a dominant stake in the business now?

Well, it’s a couple of percent more, to be frank, so it doesn’t really change much. The dominant part will stay dominant.

Okay, and mobile networks are synonymous with trying to ramp up CAPEX at the moment. I see that Vodacom’s CAPEX has decreased by 12% for the period. Can you explain why that is?

Yes, I think what we’ve done is we’ve invested R11.3bn of CAPEX across our footprint but we did do what we call a ‘spring investment’ where we accelerated CAPEX much higher. We now, in our capital guidance at that point two-years ago was 14% – 17% of sales. Now we’re investing 12% – 14% actually, we’re investing around about 14% of CAPEX to sales. It’s basically making sure that we can still unlock it. So, we’re still investing a lot but we did have two highly accelerative years, where we basically pumped a lot more cash in.

Looking ahead there’s strong headwinds based on the South African economy. How does that impact Vodacom?

Look, I think in a number of ways. Obviously, our currency volatility is a big issue for us in that, the weaker the currency you just physically buy less equipment for it. So, if the currency decreases by 20%, you buy 20% less equipment and that’s just the reality but also your cost base goes up because a lot of your costs underlying, are dollar based. An example would be the fees you pay your Microsoft or the fees you pay to Huawei for your network and so on. Those are Dollar based fees, now what we’ve been trying to do is to rand base as many of those fees as we can and the same in our different countries, trying to bring it back into local currency but it does have an impact.

Also, if we get a further downgrade and the local debt gets downgraded then essentially what will happen is, besides the outflows that will happen, you will also have finance costs becoming a lot more expensive. Banks tightening up in terms of providing of credit in the market and so on and that result can be quite dramatic on the economy because then the consumer comes under pressure. He can’t buy, that type of thing, so you could potentially see a decrease suspend across the board. So, we’ve been monitoring it. What we’ve tried to do, as we’ve showed now with our results, we’ve looked at fixing 50% of our debt and left 50% floating. We’ve basically, tried to make sure that from a consumer perspective, our pricing is on the button, as I like to call it, and I think we provide the best value in the market. So, it’s making sure that consumers understand that that they’re getting the full benefit and the full value from that, and so on. Then you forward cover whatever you can and that’s all you can do, so everything else, and you can only do that for short-term because you can’t forward but I think the concern around a downgrade is the long cycle in which to get out of it.

Data revenue has obviously been a strong growth point for Vodacom over the years. I recently spoke to an expert from the Boston Consulting Group, who said that data growth in South Africa has halved in the last 18 months because of the economic strains. What do you make of that?

I think he doesn’t know what he’s talking about. Sorry but.. I have to be quite blunt. Data growth in South Africa is still growing quite significantly. We’ve had 19.7% growth in data. Data traffic is up 45%, so yes, the traffic has come down a bit but that will naturally happen because you’re growing off a bigger and bigger base but the growth in revenue is still significant and the growth in usage is quite significant still. Pricing as such, continues to come down, so we’ve been bringing down pricing by migrating people into bundles. Buy dealing with out of bundle rates, and these types of things, so there’s a deliberate part to bring prices down but also continue to grow the traffic and the usage.

I think what we’re focusing on is firstly, what we would call, you have to build a network and you have to have the speed, the capacity and so on, and you have to increase your addressable market. The second part of the strategy has really been about devices. Put the right device into peoples’ hands and they use more data. The third part of the strategy is the whole pricing part of what we’re doing with ‘Just 4 You’ and big data machine learning and so on. Lastly, what we’re doing is we’re trying to increase what we call ‘reasons to consume’ with video partnerships, with music, so these content partnerships and so on, I think helps to increase the reasons why you use data.

Even if the economy slows down dramatically we get downgraded and June again, you don’t foresee any tailing off in data?

There’s this very controversial ICT white paper from government, which calls on operators such as yourselves to hand over spectrum to a single, national, wireless provider. I see in your SENS today that Vodacom is challenging the white paper along with a number of other networks. Can you give us more information on that?

I wouldn’t say challenging because we’re not. There aren’t any challenges as yet. I think what we’ve done is construct a dialogue with government. The six operators in the country have got together and approached government, with what is called a hybrid model, which essentially is that there will be a wholesale open access network, which will be black held, and then effectively that the existing networks also gets spectrum but that the operators also buy capacity in the one, which helps to anchor the one, if you like, and then can create the success that we’re looking for in that space. It’s kind of a hybrid model that’s been envisaged. It’s under consideration by the department and then we’ll take it from there. There aren’t any challenges as such. It’s more kind of constructive dialogue between industry and the ministry to try and find an amicable solution.

Shameel, thank you very much. It’s been a pleasure talking to you today.