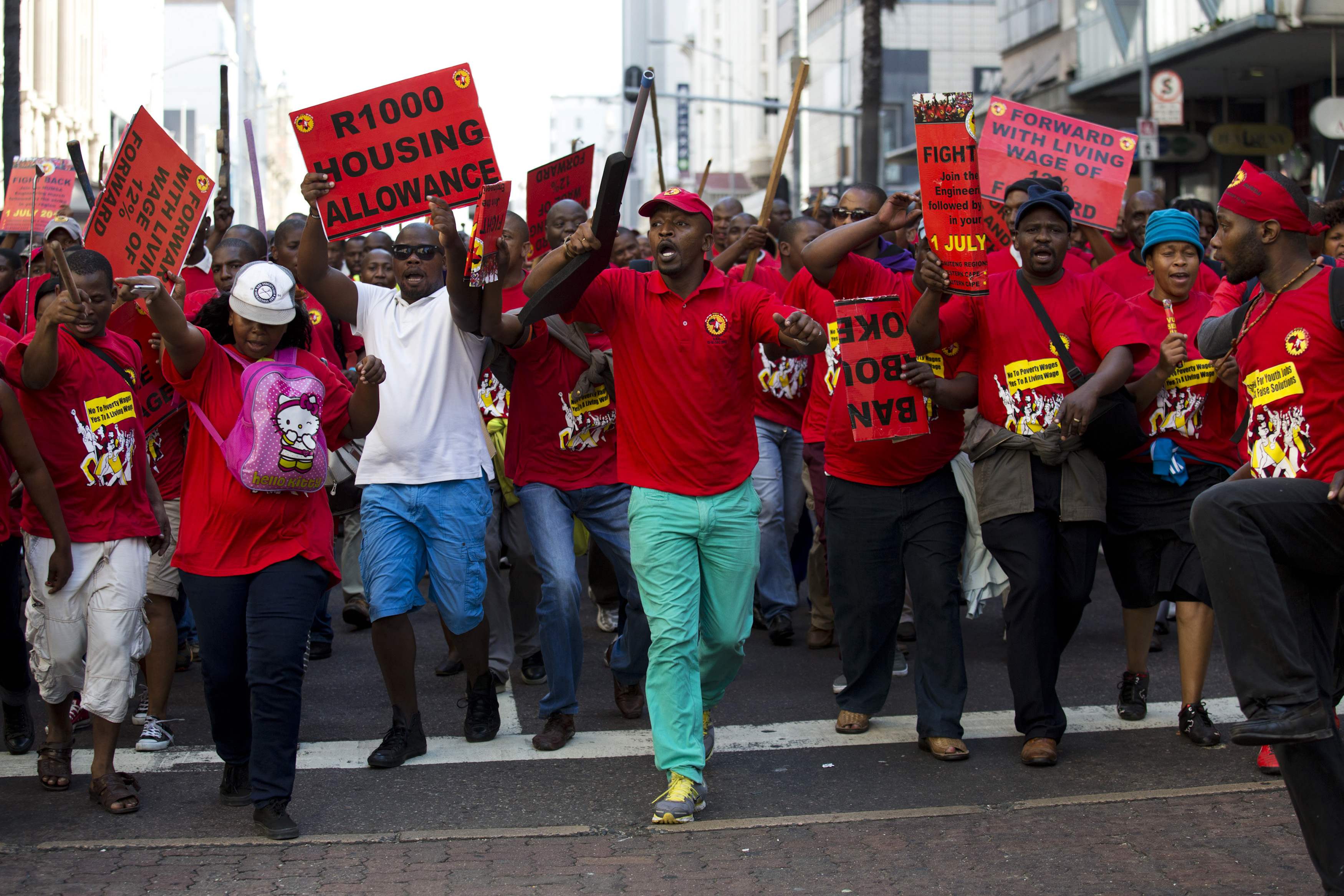 The most apt description for Gideon du Plessis’ excellent piece is, ‘must read’. The quagmire of variables that dictate South Africa’s unionised labour force is complex. It is the very reality of competing forces, with hidden agendas and politicised motives that has created a dangerous environment where unions have ended up holding the South African economy to ransom – without any recourse. All of this highly destructive and notoriously violent downtime is defended as a necessity to emancipate the labourer from the bounds of economic oppression. Reading Gideon’s piece makes you question if the labourers best interests are truly the focus of the unions as they brandish their power, leaving a trail of damage in their wake that we can’t really quantify. All we know is that there must be dire consequences – least of all the strikers being worse off than when they started in the greater scheme of things. – LF

A look behind the scenes of the current metals and engineering strike reveals a picture of a complex negotiating process filled with internal strife, poor leadership, conflicting interests and unethical behaviour, which also reflects the state of labour relations in South Africa. The forum within which the current labour dispute takes place, the Metal and Engineering Industries Bargaining Council, consists of six trade unions and six employer organisations and under normal circumstances, it requires a balancing act to accommodate the various interests and conflicts within the council.

Only Solidarity, the second largest trade union in the industry, is not on strike while Numsa and four other trade unions are striking although the other four are doing so in utter secrecy. Consequently, Solidarity is continuing negotiations in a constructive and relaxed atmosphere and should be able to reach a favourable settlement without even considering striking.

In contrast, employer organisations are negotiating with Numsa in a highly tense atmosphere despite the fact that Seifsa (the Steel and Engineering Industries Federation of Southern Africa) has already complied with Numsa’s demand for a double figure increase for year one. However, Numsa cannot settle that soon because its leaders need “airtime” to make populist statements in pursuance of the example of Amcu leader, Joseph Matunjwa, by addressing the cheering workers’ class who believe the strike is about their interests. In the meantime, Numsa is faced with a headache, because at the start of the strike its leaders indicated that the trade union would lower a 15% demand to 12%, but would consider a 10% increase; this while Numsa’s Gauteng structures acted in bad faith by unilaterally reverting to a 15% demand, an approach no doubt acquired from Amcu.

Meanwhile, Numsa is abusing the intervention of the Minister of Labour to bring political issues such as the abolition of labour broking and the abolition of the youth wage subsidy to a head. Moreover, Numsa is “bullying” the minister to extend an agreement in terms of which so-called bargaining fees are recovered from employees and employers and are then apportioned between the parties. In the past, Numsa seemingly unlawfully derived a benefit of R6 million per month from the agreement by presenting inflated figures, but a dispute about the accuracy of the parties’ membership figures has resulted in it not being feasible to implement the agreement again. Numsa’s membership figures for the specific industry are central to the suspension of the agreement. Numsa’s membership ranges between figures of 220 000 (which it is now presenting to the media), 130 000 (according to the bargaining council’s records) and 70 000 (according to two independent audits undertaken by KPMG and the Department of Labour respectively). Therefore, Numsa is abusing the pressure brought about by the strike to advance its own interest through the back door and to try to sidestep corporate governance processes to restore its golden financial thread.

The employer organisations’ negotiating path is also fraught with difficulty because the six employer organisations are not negotiating as a united front. As a result, Seifsa made a differentiated offer of 8% for skilled employees and 10% for entry level workers. The offer of the other employer organisations is 8% across the board for all workers. Seifsa’s 10% offer is, however, its attempt to reach a speedy settlement and to bring an end to the high levels of violence and intimidation. However, only one agreement is signed, and the irony therefore is that further tough negotiations between the employers lie ahead to consolidate their position on all outstanding issues. (This was also the challenge the three platinum companies recently faced during the Amcu strike). In the midst of it all there is rivalry between Seifsa, whose members represent the majority of employees, and Neasa (National Employers Association of South Africa) that represents the largest number of employers, and these two are moreover embroiled in many mutual disputes and litigation processes. To boot, Neasa takes a hard-line stance against Numsa, while Seifsa continually seeks to build a strategic relationship with Numsa; this while Numsa will not be loyal to any employer because of its strong ideology.

Meanwhile, as in the case of the Amcu strike, government, the South African Police Service, employers and trade unions face the challenge that the rule of law is increasingly being challenged. Numsa’s leadership, like Amcu’s, underestimate the moral decay of their membership by making inciting speeches that their members take seriously and the call for a fight against “white capital” can thus be interpreted as a call for lawlessness.

Despite Numsa’s initial reaction to shrug off the criticism of its violent strike coming from Solidarity and employers as “cheap” propaganda, overwhelming concrete evidence has now forced Numsa to denounce the criminal behaviour of its members. However, Numsa lacks the courage of its convictions to take steps against members. It is this criminal behaviour that may force Numsa to bring about a speedy settlement to protect its image of an effective, radical socialist trade union against the new image of an undisciplined trade union. The current workplace anarchy will hopefully force employers and Numsa to settle their own, in-house differences and to expedite a settlement. However, if the strike-related violence and intimidation become part of the strategic planning of Numsa and Amcu, then the constitutional right to work and the right to freedom and safety will increasingly become subservient to the right to strike, and eventually it will split trade unions between militant and moderate trade unions.