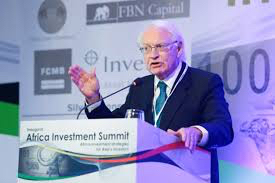 I worked for ABSA shortly after it was formed through the merger of four small banks into Africa’s largest retail banking group. At one of the memorable executive get-aways we sent hours being lectured on how the time delay on one’s decisions lengthens the higher up the totem pole you climb. For example, the impact of a decision by the supervisor at a local retail outlet will be immediate; but the impact of a decision made by the President of a country is often only known years hence. Which makes it all the more important for those in leadership to retain a high degree of humility, so when making decisions they remember to err towards caution as there is a great deal they don’t know. This excellent contribution by Dr Denis Worrall, who served SA as its ambassador to the UK and Australia, explains how a seemingly innocuous decision by President Jacob Zuma has far greater ramifications most of us might expect. He is referring to Zuma’s 11th hour cancellation of his official trip to the UK. Seems our President might be better served by advisors with a clearer grasp on the impact of such things. Worrall, at 79, might not be up for the job, But there must surely be many younger, abler citizens who could help the embattled leader avoid similar mis-steps? With ratings agency downgrades and foreign investment on strike, South Africa can do without continuously shooting itself in the foot.  – AH

As the head of a diplomatic mission twice over – Australia and the Court of St James – I have a very good idea of what the visit of a Head of State or even a Minister of State means to a country’s diplomatic representatives in the country to be visited, to business associations there, the media, and the country’s citizens abroad.

Such visits are not planned and undertaken over a couple of weeks or even months, and such visits put an abnormal burden on the embassy staff because of the detailed planning and execution of plans involved – from the meeting at the airport, transportation, accommodation, dietary considerations, security all along the line, communications with media both at home and locally, and assuming he is a male, identifying suitable hairdressers and planning shopping time for the celebrity’s spouse.

Aside from the internal planning the embassy is responsible for its officials must decide who should see the visitor and what functions he will address – which  will immediately engage the responsible organisations in intense activity, so that they deliver audiences appropriate in  terms of relevance, interest and numbers.

I mention this by way of an introduction to President Zuma’s decision to cancel a long-planned visit this week to London – a visit during which he would open talks on BRICS and address an influential South African-interested audience at Chatham house – one of the more important platforms in London for visiting international celebrities in both the public and private sector.

President Zuma’s decision to cancel was made late last Friday, with the presidency simply announcing: “His Excellency President Jacob Zuma will no longer attend the Third Annual BRICS Conference in London which takes place on 27 October 2014”.

No explanation more than that bald statement was given at the time but presidential spokespersons later said it was because of a change in his diary – something so patently absurd as to add to the understandable anger felt by Chatham House and all its special invitees who had adjusted their diaries to attend. In fact, Chatham House the same evening, no doubt spitting fire, cancelled its function, to the puzzlement of the many serious business people, who had scheduled to attend.

Just thinking about the complexities and implications of such a peremptory cancellation one wonders whether President Zuma has any understanding of the dire consequences of such action. After all, this is not the first time he has precipitously withdrawn from a major event. In February of this year he chose not to attend Queen Elizabeth’s “thanksgiving service” for Nelson Mandela, which had actually been rescheduled from 11 February 2014 to 3 March especially to accommodate Zuma’s schedule. Aside from the central organisers having to re-organise activities and events, this resulted in some 1800 invitees from all over the world being forced to change their own plans.

And earlier in February President Zuma pulled out of attending a World Economic Forum in Davos, citing “work pressure at home”, yet found it possible to attend at that same time the wedding of Robert Mugabe’s daughter in Harare. Apparently, that event did not conflict with his work schedule.

Whatever the president’s spokespersons and Mac Maharaj later gave as the reasons, we personally have no doubt that the sudden cancellation was because Prime Minister David Cameron chose not to see President Zuma and offer him a photo opportunity. Instead, the foreign office suggested he see Cameron’s deputy Nick Clegg — a suggestion that was completely unacceptable to our president who, as one South African newspaper put it, “threw his toys out of the cot”.

As regards Cameron’s refusal to give President Zuma an audience, we believe that was on the advice of his personal advisers and even the British High Commission in Pretoria. That advice would be based on President Zuma’s present low rating as Head of State and on calculations of just how long he will be around. In fact, it might even have been suggested to the British Prime Minister that it would do his image harm to be seen smilingly welcoming President Zuma to the UK.

Business Day on Tuesday headed its editorial comment on the cancellation with: “Zuma not needed in UK”. This obscures the point. Yes, as things stand, Zuma is not needed in London. But that surely is not the issue. The visit having been scheduled, President Zuma’s cancellation in a fit of pique, is deplorable, unacceptable and damaging to our relations with a major trading and investment partner – considerations which one doubts even occurred to our president. In fact, right now President Zuma is hardly a credit to the Southern African Government or even the ANC, certainly not an asset in encouraging investment, and hardly an example for the youth of this country. In fact, he is a national liability.

* Dr Denis Worrall was South Africa’s Ambassador to Australia from 1982 to 1984; and the country’s Ambassador to the UK from 1984 to 1987 before return home to enter politics by co-founding the Independent Party. He subsequently became one of three co-leaders of the Democratic Party.