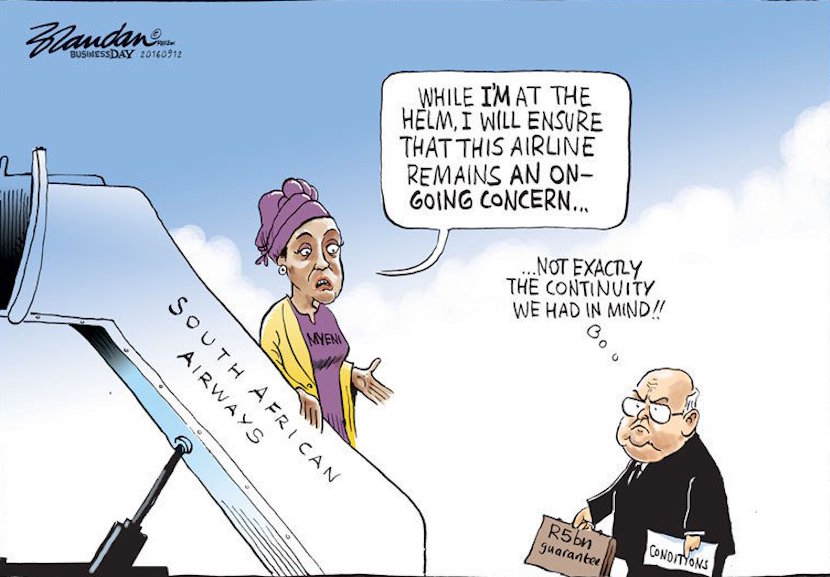 It’s hard to grasp the extent of money being wasted at national airline South African Airways (SAA), where Dudu Myeni remains at the helm even though she has a dismal track record in financial management. John Maynard, an economist who spends his spare time playing with numbers, has worked out that R5bn used to prop up SAA could be put to better use elsewhere. This money could have paid tuition fees for 55 000 students for three years, he calculates. And, while that amount wouldn’t cover free tuition for all students at tertiary level, it would have been a good start at appeasing angry #FeesMustFall students who have been demonstrating violently at university campuses. Alternatively, the government could have used the money to house an additional 93 000 families, or pay for 1m solar geysers. Maynard would like to see SAA privatised, believing it is in the best interests of the economy, and ultimately the country, if it is run like a business. The sooner, the better if SAA is to avoid more losses. Unfortunately for taxpayers, Dudu Myeni appears to be very comfortable in her seat at SAA – like the cat who got the cream. – Jackie Cameron

We take a look at what the South African government could have bought with Dudu Myeni’s gravy plane bailout money of R5bn. A friend of President Zuma, and executive chairperson of the Jacob G Zuma Foundation, Dudu Myeni is unfortunately also the chairperson of South African Airways (SAA). And under her leadership the SAA has been in the news more than ever.

And unfortunately not for the right reasons. From dodgy plane financing deals to SAA making millions in losses and reporting on their financials much later than they should. It seems she is hell-bent on sinking SAA. Below we take a look what the South African government could have bought with R5bn instead of giving Dudu more money to burn.

The infographic says all there is to say. With the #feesmustfall campaign in full force, the South African government could have paid for 55 000 students to go to university for 3 years. While this is a drop in the ocean in terms of providing free education for all, it is a start. It is money that could have been applied to a greater cause than giving it to a money-sucking black hole that is SAA.

Almost 93 000 RDP houses could have been built for the poor, to get more people out of shacks and into an actual home – to give so many more people the dignity of staying in a house. We are sure those staying in townships would have appreciated that a lot more than seeing an SAA-branded aeroplane overhead.

With Eskom spinning its wheels and producing less and less electricity, this could have been the perfect opportunity for government to roll out buying 1m solar geysers for South African households. To lessen the dependence on the Eskom grid, which is shaky at best, but to lower the amount of strain that is placed on the grid. And this would have come in as a handy electricity bill saving for households, who could have used that money on something else, stimulating spending and assisting our ailing economy.

Pensioners (of which there are about 3.1m receiving old age grants) whose government grant money is becoming worth less and less (as inflation eats away at the real value of money) could have received a R134- a-month boost for a year.

Perhaps government should let go of the idea of trying to run a business, and rather focus on running the country, and let business people run businesses?

We think a private equity partner or privatisation of the national carrier is the best bet. This will see SAA being run more efficiently and it will reduce the demand of the government wallet. SAA might even one day make money and pay large sums of taxes towards the government if it were privatised. Which is exactly the opposite of what is happening now as government is using our hard earned tax money to try and run the SAA. (But seems Dudu wants to run it yes…into the ground).

The last number we have up in our infographic (631 313) is the number of school children government could supply a R30 meal a day for, for every school day for a full year. That’s right: government could feed 631 313 hungry school children every school day for a year instead of feeding the money-eating machine that is the SAA. Next time the SAA board meets (without their phones that are confiscated by Dudu’s guards), I hope they think about these numbers before making costly business decisions.