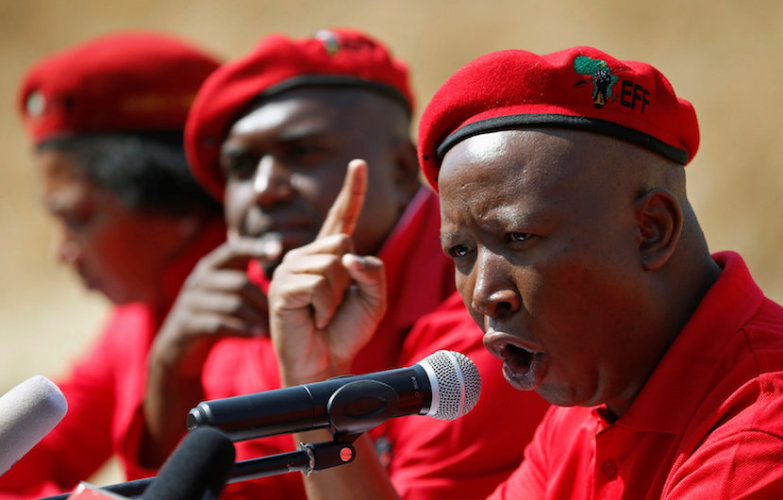 Julius Malema is one of those charismatic political leaders: whatever comes out of his lips has the crowds gagging for more. Unfortunately, his words are dangerous. On the surface he is deeply racist and would like to excise all white people from South Africa. He has hinted heavily that this could be done violently, too, as land is grabbed. For some, Julius Malema is the equivalent of South Africa’s very own Idi Amin, the Butcher of Uganda who was responsible for many thousands of deaths and expelled the country’s Asian population in the 1970s. While Malema isn’t the ruler of the leading ANC, he is on the ascent, with his rhetoric appealing to many disaffected South Africans as support for the ANC wanes. It would not be wise to dismiss Malema as a poorly educated man rambling on to unsophisticated followers; he and the party he leads, the Economic Freedom Fighters (EFF), have the potential to sow mayhem. We have seen them recently, wearing red items of clothing to mark their EFF allegiance, in the midst of violent student protests. The student #FeesMustFall demonstrators quickly added decolonisation to their list of demands along with this surge in support from the EFF. In this analysis, Solly Moeng takes a close look at Julius Malema from the perspective of leadership, to highlight why he is not the type of leader South Africa needs right now. Playing the race card is sheer laziness; we need a leader who can help diverse, angry people find a middle ground. Much is at stake, cautions the strategic corporate communications consultant. – Jackie Cameron

I was dumbstruck when I listened to EFF leader Julius Malema addressing his followers outside the Newcastle Magistrate’s Court on Monday.

Without blinking, he moved from accusing President Jacob Zuma of being a bad leader after failing to uphold the constitution of our republic, to making threats to act against the spirit of the same constitution he has been pretending to defend in recent years. There was no pause.

As usual, Malema seemed to speak unscripted. He was his usual charismatic self and, like a preacher in front of a pulpit, the more he went on the more unstoppable he seemed. The crescendo of his pitch rose at the same speed as the vileness of his words. His followers swallowed every word he bellowed with glee, like a congregation in a long moment of unthinking spiritual ecstasy.

Going by what Malema said, white South Africans do not have the same status in front of the constitution as do blacks, especially Africans. In the same address, he threatened to use “all means necessary” to take away their land without compensation and give it to back to the indigenous people of South Africa, i.e. (in his eyes) black Africans.

Now, we can spend another eternity arguing about who got here first, between the Khoisan and Africans – also referred to as black Africans for clarity – and who is more deserving of the title of ‘first nation’ than the rest; but this will take us nowhere safe.

At best, Malema’s line of thinking can lead to no lasting glory and, at worst, it is highly divisive and the kind of stuff that leads to civil wars.

Think of the very divisive, silly notion of “Ivoirité”, first introduced in Ivory Coast by one Henri Konan Bédié in 1995 and used by political opportunists to determine who was more Ivorian than others. As a result, Ivory Coast was plunged into a civil war that culminated in former president Laurent Gbagbo ending up in prison in The Hague. Gbagbo opportunistically relied on the notion of “Ivoirité” to try and prevent current President Alassane Ouattara from assuming high office in his country of birth.

Here in South Africa, Malema is asking for a two-headed civil war. Clearly he forgets the brink from which this country was pulled in the early 1990s, when wise South Africans from all historic divides came to terms with the reality that there can be no room for ‘winner takes all’ in our space.

Coloured South Africans, some of whom are direct descendants of the Khoisan, are not less South African than blacks and whites and they should not accept being relegated to second class citizens who can eat only after the blacks have filled their stomachs and cleared the table.

They too are children of this soil. And Malema is both naïve and irresponsible if he believes that whites will act like sitting ducks and just let him and his supporters rob them while they cower in fear.

Listening to Malema, it felt like the spectre of Zimbabwe had crossed the border into South Africa for an uninvited visit. The irony of it all is that while Malema was complaining about a piece of apartheid-era legislation being used against him, he was busy pissing on the spirit of a carefully sewn-together post-apartheid constitution.

"No slaughter of whites – for now." There he goes again, Julius #Malema Trumping over the Constitution.

Now, none of this means that nothing should be done to correct the injustices of apartheid whose legacy keeps staring us in the eyes. Some work has been done in this regard, but much more remains to be accomplished. We have a good constitution and adequate legal instruments to correct the wrongs that remain a source for much anger and frustration in communities that were robbed of their land during apartheid.

There are still hundreds of thousands of people whose forefathers were thrown off the land they had occupied for centuries without compensation. And such victims of forced removals are coloured and Indian too. Many still drive past those lands on a regular basis just to reminisce and share their stories with their children, too powerless to do anything about it.

Many others have had the graves of their loved ones tampered with by the new landowners who, in some cases, have even resorted to racist violence to prevent them from visiting the burial sites of their parents and grandparents.

This cannot be right. A good combination of political will by the authorities and goodwill by those who benefited directly or through family inheritance from land that was unjustly taken away from victims of apartheid is needed to end the nightmare. Failure will only help breed political opportunists who will put emotions ahead of national harmony.

The kind of leader we need

If we haven’t begun doing so, it is time to actively start thinking about the kind of people we want to see leading the process to reconfirm the basic tenets of our nationhood, consolidate our unity – which should be stronger than our diversity – and take our country forward, out of the current mess it’s been placed in.

In doing this, we should be clear about what we want and what we do not want in our leaders. At the top of the tendencies we should reject is one of so-called leaders who easily resort to racial profiling in order to win voter support.

I really don't think this motion of no confidence serves any purpose except to unify the divided @MYANC, will wait for direction from EFF…

But all of that is sheer laziness. We need leaders who will master the art of resisting easy short-term victories and pull us all to the safe, shared, middle. Going by his recent utterances, Julius Malema is not the leader that our great country needs at this point in its history. To use that now famous American expression, he lacks the temperament of a leader deserving to lead our country and return lustre to its global image.

Much is at stake; civil society movements should remain alert and allow no space for opportunists whose rhetoric will only lead us out of the frying pan into the fires of hell.