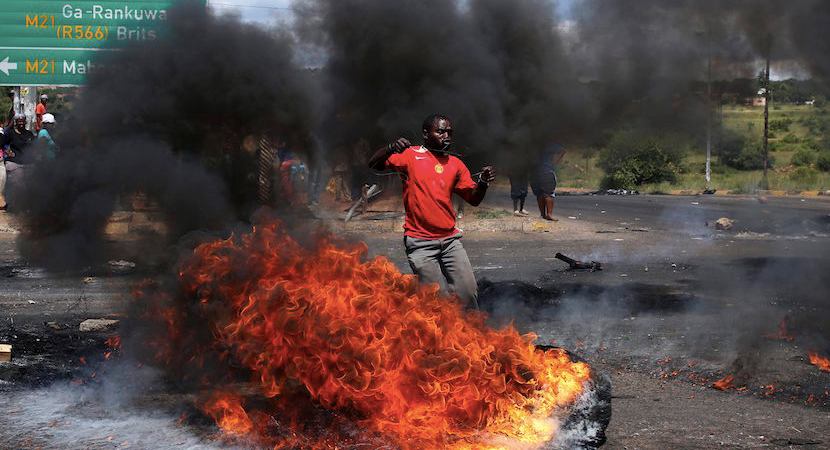 Is South Africa really in such a bad state that continual deterioration is inevitable? Sadly, this seems to be the conclusion from a top South African academic, who has spent much time analysing what’s currently wrong with the country – and how it got here. Marius Oosthuizen, of the University of Pretoria’s Gordon Institute of Business Science, says South Africa is facing a cluster of crises. The root cause is that the ANC leaders ruling the country have an entirely different aspiration for the country from the one set out in the Constitution. Above all, socio-economic problems have worsened for many millions of South Africans and the post-apartheid economic regime is not fit-for-purpose. As Johann Rupert, a wealthy South African businessman, highlighted recently: governments can’t create jobs, so they need to facilitate an environment in which commerce and industry can flourish and, in so doing, generate economic growth. South Africa’s problems, meanwhile, aren’t academic ones. With many millions of people experiencing severe hardship and with no obvious way to help themselves to a better life in the face of government-created obstacles, it seems inevitable for analysts like Oosthuizen that the sleeping giant of civil society will have to awaken to drive systemic change. – Jackie Cameron

South Africa is facing a cluster of crises.

There is a deep systemic crisis in all levels of education, where significant government resources are budgeted but where the situation for the majority of young people has worsened over time.

South Africa’s problem is that its constitution is a perfect brochure of the nation it aspires to be. But the contractors entrusted with its future have an entirely different project in mind.

None of these crises are fundamentally new. But they all have their origin in long-standing legacy issues rooted in South Africa’s apartheid and colonialist past.

These legacies have precipitated a mismatch between South Africa’s political-economy, the nexus of political and economic power, and the society whose aspirations the system is meant to address. Democracy unlocked a path to political rights for all South Africans. But socio-economic rights have remained illusive for millions.

This dire reality has been masked, for a time, by the progressive fiscal spending of the state. Since 1994 this has favoured the poor in the form of social grants and enormous social infrastructure programs for access to basic rights. But none of this has translated into long term economic upliftment.

The state’s approach to disbursements has meant that dependence on the state has ballooned in terms of direct cash transfers as well as rapid growth of the government wage bill. At the same time state efficiency has been degraded.

Coupled with other weaknesses in the state, South Africans have increasingly become frustrated with the low pace of change. People have expressed their dissatisfaction in the form of mounting protests. And in latest local government elections they also withheld their vote for the ANC, or voted for opposition parties.

Only a few enjoy economic benefits

At the same time South Africa’s highly consolidated economy has increasingly benefited only the elite at the exclusion of the unskilled. Except for a small club of politically connected beneficiaries, most people have looked to the state rather than to business for relief. This has translated into economic growth without expansion in the labour market.

In addition, poorly performing state owned enterprises such as Eskom have precipitated the impact of rising energy costs while rising demands from labour have put old business models under cost pressures. All this has led to a lack of investment locally.

In addition, the stubborn spatial divides precipitated by apartheid policies have meant that millions of the most vulnerable South Africans are structurally excluded from participating in the formal economy. Even if there were jobs, they would come at great personal expense in the form of travel time and costs. And while the informal economy has grown, the influx of migrants from neighbouring states and countries such as Ethiopia and Pakistan has introduced vigorous competition between traders in the informal sector.

More recently a destabilising youth bulge, a cohort of South Africans increasingly indifferent to the pre-and post 1994 Rainbow Nation narrative has come to the fore. This is manifest in the emerging #Fallest culture, calling for change in the form of #RhodesMustFall, #AfrikaansMustFall and more recently #FeesMustFall. This is a groundswell that I believe has only just begun.

There are competing narratives of why the status quo has emerged.

The narrative emerging from the ANC and its alliance partners the South African Communist Party and the Congress of South African Trade Unions is that corporate South Africa, and big business in particular, have not demonstrated a patriotic loyalty to South Africa. This, they argue, would translate into investment and higher growth and more rapid racial transformation.

In turn big business has argued that the failings of the political establishment and grotesque shortcomings of the current executive have been at the root of its reluctance to invest.

Narratives from civil society have included criticism of the middle class and previously advantaged communities for refusing to share in the wealth of the country. And emerging on the left has been a narrative, increasingly echoed by the youth, that South Africa’s negotiated settlement was a victory for white monopoly capital at the expense of the legitimate claims of the black majority.

The hard truth is that South Africa has limited options for developing its economy to address its social ills. This is because of the historical interdependence of the country’s economy on its large industrial state owned enterprises for cheap production inputs, in addition to its more recent openness in terms of foreign investment in securities and the currency.

In essence, productive capital is in the hands of a few who do not depend personally on South Africa’s long term stability. On the other hand political power is centralised in the hands of a small elite which is now interdependent on the holders of capital domestically and abroad. Individuals in this elite rely on their political positions to sustain their economic advantage.

This means that the bulk of South African society is excluded both economically and politically from the means to address their plight and often lack the conditions suitable to taking an entrepreneurial route to upward mobility.

In essence, South Africa’s post apartheid economy is unable to deliver on the social contract enshrined in the constitution. In its current form the political economy of the country simply cannot address the discrepancies between the society envisioned in the constitution and the lived reality of citizens rapidly enough.

South Africa’s choices are not between clear and simple “left” versus “right” economic ideologies. Rather, its future rests on an intricate set of inter-dependencies that match opportunities for capital with inefficiencies in the national development system. And South Africa needs a new economic regime that, over time, dynamically matches the structure of its labour market as skills are developed.

But neither the social capital nor the institutional mechanisms exist to bring this about.

As far as I can see the only path out is for the sleeping giant of civil society to awake to this reality.