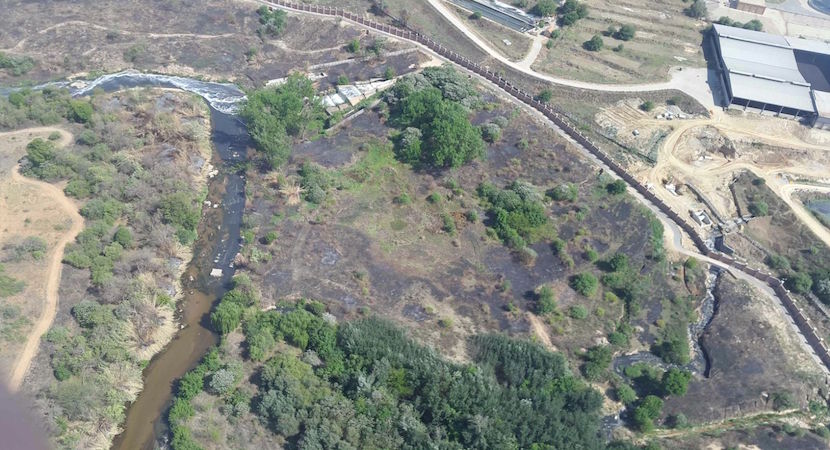 Entrepreneur-turned-mayor Herman Mashaba was recently in the news for allegedly formulating plans to radically transform Johannesburg’s city centre so that buildings can preferably be returned to owners. Johannesburg has grappled with an influx of squatters who have moved into properties. With many migrants poor, uneducated or unable to work because they don’t have the right paperwork, it has been inevitable that crime has soared in the Central Business District. Non-governmental groups have highlighting human rights concerns associated with evicting many people following leaks to the media about Mashaba’s idea to overhaul the inner city. However, there is another side to this story, with environmentalist Helen Duigan noting that a ‘shock and awe’ campaign in the centre of Johannesburg might also help to clean up Johannesburg’s waterways. The editor of VeldTalk and campaigner for clean waterways highlights how the deterioration of Johannesburg’s inner city has contributed to pollution, which in turn has led to flooding. Helen and her husband, Anthony, started ARMOUR (Action for Responsible Management of Our Rivers) 18 months ago in response to the continuing sewage spills into the Jukskei River. They have monthly meetings with officials from Johannesburg Water and the City of Johannesburg. Sewage coming down the Jukskei is linked to the state of the abandoned buildings in Johannesburg, reckons Duigan. “There are apparently 281 abandoned or hi-jacked buildings in the City of Johannesburg with no services and with vast amounts of sewage simply collecting in the basements and then spilling into streets and into the sewers. This is a major problem for Johannesburg Water but they obviously have no authority in the situation. If Mashaba can solve that problem, it would make a significant difference to the state of the Jukskei and the management of Wastewater Treatment Works downstream,” she says. – Jackie Cameron

Joburg Mayor, Herman Mashaba, has the estimated 280 hijacked buildings in the inner city in his sights for cleaning up. Overdue, but a huge challenge that none of the previous city administrations seemed willing to tackle.

These buildings, hijacked from their owners over the years and residence to thousands of people, tend to be no-go areas for even law enforcement authorities. But their “contribution” to the City of Joburg is a destructive and expensive one.

In many cases, services have long since been cut off, resulting in basements filling with sewage and litter which then pour out into the streets and into stormwater drains. From there, this toxic mix makes its way into the Jukskei River and finally, the Crocodile, ending up about 70 kms later in Hartbeespoort Dam.

The Jukskei River is a receptacle for an overwhelming quantity of Joburg’s litter, sand, stormwater and sewage – from the inner city, via Bertrams, Hillbrow and Bruma Lake, with further huge contributions from manufacturing concerns on Joburg’s north-east, and from Alexandra and Diepsloot.

Add to that toxic waste flushed into the river by some manufacturers. And the building rubble and sand washed down from developers’ sites where stormwater drains have been incorrectly (or illegally) connected to sewer lines.

Problems intensify along every kilometre of Joburg’s main sewer systems. Countless homeless people living wherever they find shelter, even inside stormwater drains, add masses of garbage which block drains and cause flooding.

Along the way the “sewer rats” destroy manhole covers to excavate sewer pipes, making surprising fortunes from valuables accidentally flushed down toilets. In the process they deliberately block sewers and anything from tyres, tattered mattresses and broken furniture is used to stop the flow.

The bulk of this ends up in Northern Wastewater Treatment Works near Diepsloot. Designed and built in the late 1950s, Northern Works was never envisaged as coping with the population explosion and growth of Johannesburg in the 21st century. Regularly vilified by people living downstream along the Jukskei and Crocodile Rivers for releasing raw sewage into the river, Northern Works has been the target of vitriolic public frustration and aggression.

Across Gauteng the polluted state of the Jukskei-Crocodile-Hennops Rivers has been a barometer signalling the ill-health of our waterways and the lack of proper management of the entire wastewater treatment system in the three Metros.

The public, seeing the devastating impact of the tons of plastic and assorted rubbish mixed with sewage flowing down our rivers, lodge complaints, alert the media, vent their frustration on social media and arrange brave river clean-ups – which last until the next storm brings another avalanche of rubbish.

It’s all about compliance and enforcement and the need to return to the application of laws developed over many years to provide a clean and safe environment. The new dispensation’s approach to return to rule-of-law has to be supported and welcomed.

But this cannot be done by a municipality on its own, no matter how determined. Business, communities and the private sector can help by identifying areas that need intense cleaning-up programmes – and lobbying their councillors, their ward committees and the Mayor’s office with information and the need to act.

The unfortunate fact is that many problems so visible in rivers and waterways are due to a lack of proper management and control by officials and law enforcement agencies. They have been compromised by a mix of inability, lack of training and resources, and sometimes corruption.

An example of the role the public can play is what happened during 2015. Over several weeks sewage had been released by Northern Works into the Jukskei because of poor maintenance and equipment breakdowns. In August 2015, this pushed the public to a tipping point. By October, a petition signed by over 400 people was sent to Joburg Water, City of Joburg, the Minister of Water and Sanitation, various media and a number of environmental NGOs.

Out of this campaign, ARMOUR (Action for Responsible Management of Our Rivers) was created to focus this pressure. The Green Scorpions and Joburg Water were the first to respond and a public meeting was held where Northern Works was put under the spotlight.

Joburg Water undertook to implement various measures and an agreement was reached to meet monthly to get public input and to give feedback on progress. The Jukskei River Working Group, chaired by ARMOUR, using a combination of challenge and support, has been meeting regularly with officials of Joburg Water, City of Joburg’s Environmental and Infrastructure Services and the national Department of Water and Sanitation.

Since the 2015 disaster, there have been other spillages from Northern Works. However, Joburg Water now has a detailed programme to replace old equipment and upgrade the Works, including appointing a maintenance manager. This does indicate a new determination to get things right.

It is clear that the growing pollution crisis has to be dealt with holistically, starting in the inner city. Good luck to Executive Mayor Mashaba.