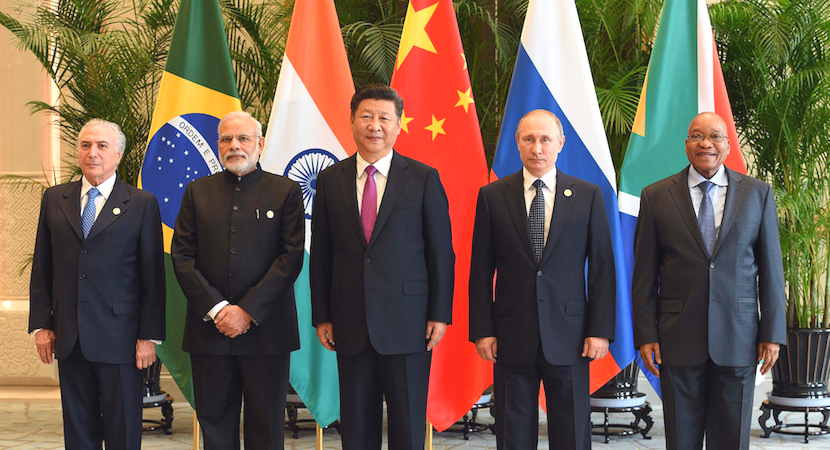 For dollar-based investors betting on the group’s stocks and bonds, the history of this decade suggests that matters less – much less – than hedging the currency risk accompanying those investments.

In terms of growth, Brazil has suffered the biggest decline as the economy slumped into a recession in 2014 and stayed there. All except India have seen gross domestic product deteriorate this decade.

That recession has dragged down the performance of Brazilian stocks, although it’s the Chinese equity market, as measured by the Hang Seng China Enterprises Index that trades in Hong Kong, that’s the laggard, losing almost 20 percent. The benchmark South African index is the clear winner among the BRICS this decade. Its gains contrast with the benchmark MSCI Emerging Markets Index’s decline of about 4 percent since the start of 2010.

Benchmark bonds haven’t really moved much since the start of the decade. South Africa’s cost of borrowing for 10 years jumped after President Jacob Zuma fired finance minister Pravin Gordhan last week. S&P blamed “political uncertainty” for its decision to downgrade the country. The move, though, leaves the 10-year yield at about 9 percent – in line with where it was at the start of 2010. Yields for the rest of the BRICS are similarly becalmed:

It’s the currency market, though, that’s seen the most action. China’s currency started the decade trading at about 6.83 to the dollar, strengthened to about 6 by the start of 2014, but has since retreated all the way back to be little changed. The other four currencies, however, have depreciated substantially.

To be sure, the above chart says more about dollar strength than it does about emerging-market currency weakness. This decade, the dollar has made ground against almost every currency in the world (with the notable exceptions of the Somali shilling, the Guatemalan Quetzal and the Icelandic krona).

The BRICS moniker was a useful tool in focusing the investment community on the likely winners among emerging markets; more than 480 investment funds in various flavors, currencies and domiciles use the term in their titles, according to data compiled by Bloomberg.

In January 2014, O’Neill shifted his attention to the so-called MINT countries — Mexico, Indonesia, Nigeria and Turkey. The history of the BRICS this decade suggests investors looking to make money from that selection need to have the currency angle front and center of their thinking.