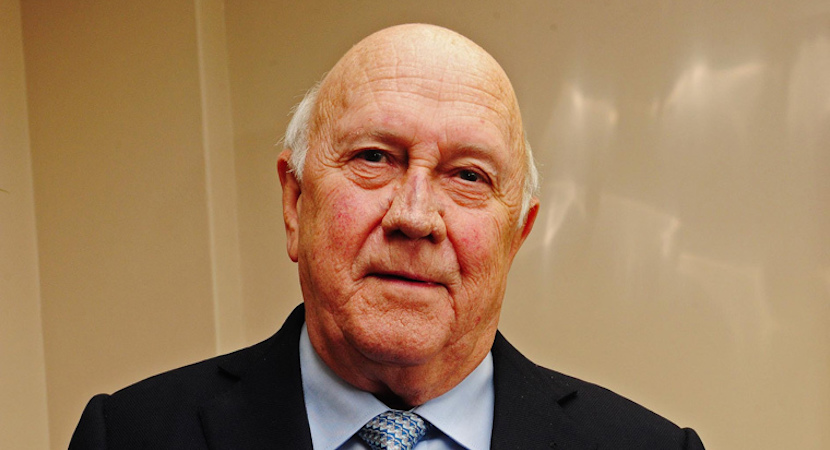 JOHANNESBURG — Perspective is sometimes needed when in the middle of a crisis, argues Theuns Eloff, the Executive Director of the FW de Klerk Foundation in this piece. President Jacob Zuma’s presidency has brought record unemployment, junk status downgrades and rampant corruption. But Eloff says that if one looks carefully, the country’s democratic procedures are working to weed out all these problems and that, ultimately, when Zuma does leave, the country could face a vastly different political scenario in 2019 when national elections are expected to be held. It’s very much a glass half-full perspective. – Gareth van Zyl

One cannot blame South Africans for feeling a little punch-drunk and perhaps even despondent. It seems like there is no more good news in the media. The prospects for the country and the rand do not look good and reportedly, the emigration agents are making good money with South Africans seeking greener pastures (not that Britain looks so green following the terror attacks in public places – it’s a lot safer even on Johannesburg’s streets).

There are two broad reactions to this state of affairs – some (like former president of the Free State, Jan Brand) say “everything will be alright”. “Zuma is on his way out one of these days and then everything will be set to rights again.” Others (like those who choose to emigrate) say with conviction “all is lost – the country will never recover from the damage inflicted by Zuma”. However, neither of these two reactions is 100% correct. As with many other things, the truth lies somewhere in between.

A quick snapshot of the causes of our being punch-drunk is not difficult. Top of the list are the numerous and never-ending reports of state capture by the President and the Guptas (among others), as well as corruption in, and ongoing maladministration of, government departments. The ANC’s leadership battle is fiercely underway in the background. Add to that the Zille battle in the DA.

Economic growth is not helped by political uncertainty and unemployment is at its highest level in 14 years (27.7%). Poverty is everywhere and is not diminished by poor service delivery, which is mainly due to a “lack of capacity” (read racial and numerical transformation). Crime, especially murder and rape, are increasing at a shocking rate. And because everyone is struggling, racial polarisation increases. The Bell Pottinger conceptualisation of “white monopoly capital”, which is blamed for everything, exacerbates things.

The bad news is that everything will not go away soon. These things took years to develop and will take years to come right. The nearly 200 000 leaked Gupta emails with bizarre information about the toxic mix of patronage, corruption and state capture will be made public by the media for weeks (if not months). The hits keep coming. South Africans feel as if they are suffering from concussion. We collectively stagger from day to day.

Former President FW de Klerk has (despite his justified criticism of the current state of affairs) said many times in the past, and recently again, that he believes South Africa’s glass is half-full, and that we are still in a better place than we were before 1994.

I suspect there are two reasons for a more balanced outlook on the state of the country. The one is what can be called the “prospect of looking further ahead”. If you only look at the short term (six to twelve months), it seems as if there is no relief. We are in the midst of trouble. But if one looks further ahead, things look different. South Africa has another President by May 2019. Even if her last name is still Zuma, things will be different. There may even be another party or coalition of parties governing. Or there may be another President from the ANC. And what is 23 months in the history of a country? To look further brings perspective, and a little more balance.

The second reason is even more important. Nobody expected that, within 15 years of the 1994 glory days, SA would have a President who first hijacked his own party, and then the state, for personal gain. Many ask, “How is it possible that he remains in power?”, “Where are the checks and balances of the Constitution now?” Why does it seem as if the “system” is not working?

However, if one takes a closer look, it becomes clear that our “system” is actually correcting itself. The “system” consists of a number of complex factors: the first and most important is the Constitution and how it is used. The second is the nature and actions of the political parties. Even the unhappiness with its president is part of the system through which the ANC is (slowly but surely) correcting. The same is true of other parties, perhaps best seen in the unlikely coalitions against President Zuma. The third leg of the system is civil society organisations and how they help and sometimes initiate change. Their greatest weapons are the Constitution and public protest.

The fourth leg is the media, which (for the most part) fearlessly denounces problems and corruption. The leaked Gupta emails and how they are being used is an excellent example of correction in action. The fifth and last leg of the correction that is underway, is through the everyday South African voter. This correction already began in local government elections. But the final and directional correction will take place in 2019 with the general election. If a party no longer serves the voters, and by association, the country, voters will have their say at the polling station. Regardless of how unlikely it was 12 months ago, the current ANC government is at risk of losing the power it has held since 1994, in May 2019.

If one looks at things in this way, everything is definitely not lost, even though everything will not immediately be alright. But to complete former President Brand’s quote: “Everything will be alright … as long as everybody does their part”. Yes, we are bombarded by bad news, we feel punch-drunk and stumble from scandal to scandal. But our “system”, our constitutional democracy, is in the process of correcting itself. That is why we are on course – if everyone does his / her part and looks further ahead…