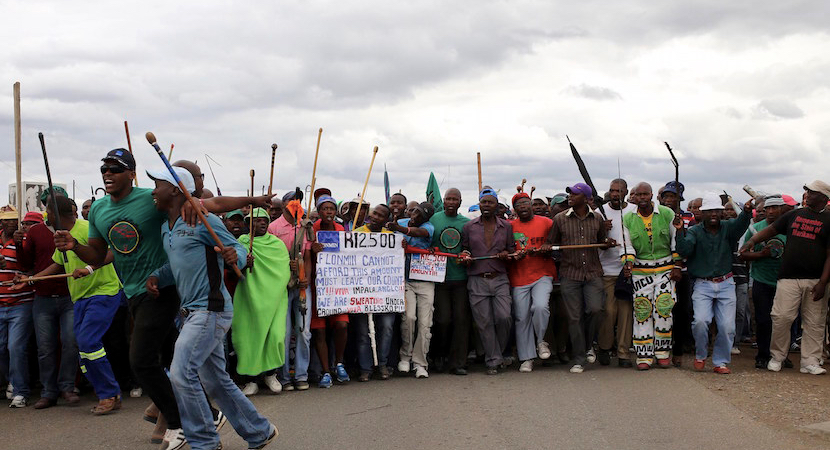 CAPE TOWN — With skilled scalpel strokes, Sara Gon, IRR Policy Fellow, dissects South Africa’s fast-changing union politics to expose a stagnant, reactive and inflexible modus operandi that threatens their efficacy and does little to protect the long-term interests of workers. What also emerges is that the current shake-up in electoral politics has its’ echo in the union field where Cosatu is under threat from new entities born in the modern era and unencumbered by historical ties with the ruling party. What Cosatu has in common with them is that they’re all anti the Zuptoid-captured ANC, which is great for the nation’s health. Where Cosatu and Fedusa diverge perhaps, is when it comes to the looming NHI where everybody will be forced to chip-in, in addition to their existing medical scheme contributions. The former supports the NHI, the latter, not so much. They want the full value of their government employees’ medical scheme (GEMS) – not just where it complements the NHI. In tackling Finance Minister, Malusi Gigaba’s use of the State Employee’s State Pension fund to bail out SAA, Fedusa, again takes the lead. But where all the unions fall down is in adapting to the tsunami-like digital revolution, which cannot be wished away. – Chris Bateman

The trade union scene is changing radically. The tension between the African National Congress (ANC) and its alliance partner, the Congress of South African Trade Unions (COSATU), has reached an all-time low. COSATU has decided that it will not allow ANC President, Jacob Zuma, to address any of its gatherings. It does not trust or support his leadership, and wants him to step down.

COSATU was formed in 1985 and, in many respects, became the ANC not-in-exile. Its strength probably started to fall in the mid-2000s as its political power grew and its union presence in the private sector fell.

The South African Federation of Trade Unions (SAFTU) has recently been established by unions who were expelled from, or left, COSATU in recent years after bitter in-fighting. SAFTU’s membership is estimated at 700 000, of which 300 000 come from the National Union of Metalworkers of South Africa (NUMSA). SAFTU also has far-left leanings.

Now the trade union scene seems to be about to be turned on its head: the 230 000-member Public Service Association (PSA) has rejoined the Federation of Unions of South Africa (FEDUSA). FEDUSA now claims its total membership is 700,000. This development has implications for the balance of power in the Public Service Co-ordinated Bargaining Council (PSCBC), where all government employees’ pay and working conditions are negotiated.

COSATU unions are in the majority at the PSCBC, but FEDUSA is confident that, taking independent unions into account, this latest development could put it on par with the ANC. This is highly significant as COSATU’s dominance since 1994 has been in the public sector. Now, COSATU will no longer be the biggest block in the PSCBC. Traditionally, COSATU has relied on its relationship with the ANC to influence employers, depending on political solutions when negotiations deadlock.

FEDUSA General Secretary, Dennis George, has said he is pleased that his organisation would be bringing together “a very large majority of 1.3 million workers in the public sector ahead of negotiations for the next three-year agreement”. George wants to restore ethics in the public service. FEDUSA wants to ensure that workers feel protected and stand up against rogue politicians “who want to force them to doing things not required from public service”.

Labour Analyst, Mamokgethi Molopyane, says that the possibility of a shift in power dynamics at the PSCBC would favour the interests of workers. “I do think that in the future…you are going to have to earn your workers and you will have to earn them because we [the federations] are not going to let go of our workers so easily.”

SAFTU’s 700 000 membership claims have yet to be audited. In order to be admitted to the National Economic Development and Labour Council (NEDLAC), SAFTU has to meet the threshold of 300,000.

FEDUSA’s constitution specifically states that it is politically unaligned. Its aim to promote the interests of its affiliates is not politically ideologically grounded. It is, however, highly critical of ANC governance.  Importantly, it is the first union grouping that has indicated that it will challenge Finance Minister, Malusi Gigaba, on his intention to use the Government Employees Pension Fund to bail out South African Airways.

Anthea Jeffry, Head of Policy Research at the IRR, says that taxpayers are likely to be unwilling to divert their private medical aid resources into the National Health Insurance scheme (NHI). Medical schemes will not be permitted to provide benefits which are theoretically available through the NHI. Instead, they will be confined to providing benefits which ‘complement’ those obtainable under the NHI. PSA, and now FEDUSA, are likely to challenge anything that threatens their members’ access to the Government Employees Medical Scheme. COSATU supports the NHI.

ANC hegemony is no longer guaranteed. COSATU has fractured and weakened. Thirty years of COSATU dominance, both as a union federation and a major player in the political arena, may be ending.

In an uncertain economic environment, workers look to trade unions to perform their traditional roles of promoting their interests and protecting their employment. The increased muscularity of the opposition parties suggests that workers may no longer be interested in unions and federations representing their political interests.

This may have detrimental implications for traditional Marxist-Leninist federations such as COSATU and SAFTU. They see South Africa as what former Democratic Alliance Caucus Leader, Lindiwe Mazibuko, has described as a ’smoke-stack‘ economy. This harks back to the industrial revolution in the mid-19th century.

COSATU has not adapted to a 21st century global environment where the nature of jobs and work have irretrievably changed. They are reactive to change, seeming to be in little position to really assist their members to adapt to increasingly rapid change. SAFTU is likely to be no different.

General Motors’ (GM) decision to close its South African manufacturing operation was taken by its parent company in America. The decision was made for reasons of margins, volumes, and profitability. Political issues were not involved. India and Singapore were also similarly affected. It was not a decision that the South African operation could change. When the decision was announced, the representative union, NUMSA, was shocked. Arguably, NUMSA should have been keeping its eye on developments over the past year. Instead, it has been entirely reactive; railing against the evils of capitalism.

De Vos states that GM’s products belong to the Second Industrial Revolution. The only reason GM has remained here for as long as it has is because motor manufacturers are heavily subsidised by the state.

Volkswagen (VW) recently said that if state support is removed, “it would be the immediate end of the motor industry in South Africa“. South Africa has no comparative advantage in the global motor trade. The industry depends entirely on trade deals such as the African Growth and Opportunity Act (AGOA).

Vehicle manufacturers are developing electric vehicles, particularly battery technology. Electric vehicles also don’t need gearboxes. A prediction is that petrol- and diesel-related manufacture will end within just eight years. De Vos suggests our vehicle industry is in decline because it is building products for which there will be no market.

De Vos says that looking at the commodities that will be in demand along the renewable energy-battery value chain, South Africa’s mineral reserves are mostly in the top ten for each commodity. As other countries make the energy transition, there is a chance of an infrastructure and retooling investment boom. South Africa could be the beneficiary of a long mineral-resources boom if the right policy decisions were taken.

Companies fail, markets change and new industries come into being. There are always going to be negative consequences for some employees, while new opportunities arise for others. Unions must anticipate the change and not keep insisting that the world is flat.