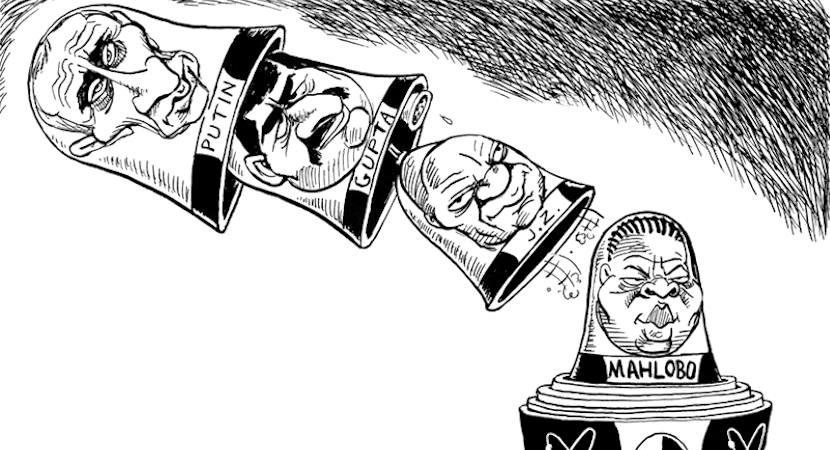 CAPE TOWN — It’s just the use of the finger that’s different; President Jacob Zuma adjusts his glasses on his forehead while clearing his throat, PW Botha waved it in admonition at imagined enemies. Both have carried one theme forward: the wicked West is meddling in South Africa’s domestic affairs. Throughout Africa, the colonial West has always been a handy whipping boy/diversion to camouflage nefarious, inept rule. Mugabe repeatedly singles out Great Britain, telling them to go to hell. Zuma’s latest iteration was on Monday at an OR Tambo Memorial lecture he delivered in Kagiso. Justifying his Zuptoid cabal’s covert attempts to seal a financially suicidal, unnecessary local nuclear plant construction deal with Russia, he labelled attempts at scuppering plans to pursue nuclear power as, “part of a Western plot to control South Africa”. He’s done a pretty good job of dominating South Africa himself. He seems to think shifting shady acolyte and former Intelligence Minister, David Mahlobo to the energy portfolio will help him outsmart the Constitution and the courts. He’d better study the Electricity Regulation Act – and the recent court victory by Earth Life Africa/SA Faith Communities Environment Institute on new nuclear generation capacity procurement. That might just catch in his throat. – Chris Bateman

If news reports are to be believed – then the newly-appointed Minister of Energy – fresh from a not-without-controversy stint as Intelligence Minister, is steaming ahead with nuclear plans. This, in spite of the Finance Minister having recently stated that nuclear energy was neither affordable nor immediately necessary. Reading from the same script as the Energy Minister, President Zuma, at the OR Tambo Memorial Lecture in Kagiso, yesterday stated that “attempts to scupper plans to pursue nuclear power are part of a Western plot to control South Africa”, as a seeming endorsement of the Energy Minister’s plans.

News reports further suggest that the Minister of Energy plans to finalise South Africa’s reviewed Integrated Resource Plan (IRP) as early as 14 November 2017. Should this be case, then the judgment handed down by the Western Cape High Court in April, (in which Earthlife Africa Johannesburg and the Southern African Faith Communities’ Environment Institute successfully challenged the government’s decisions in respect of the procurement of nuclear new generation capacity) serves as the backdrop through which the nation’s nuclear procurement process should occur. Ultimately, the decisions pertaining to South Africa’s energy policies rest with the Executive, with the Court’s role limited to reviewing such decisions.

Section 34 of the Electricity Regulation Act requires that prior to the commencement of any procurement process for nuclear new generation capacity, the Minister of Energy and the National Energy Regulator of South Africa (NERSA) are both required, in accordance with “procedurally fair public participation processes”, to have determined that new generation capacity is required and must be generated from nuclear power.

According to David Mahlobo the nuclear plans r continuing at a scale we can "Afford". SA is BROKE which part of that doesn't he UNDERSTAND?

This means that there has to be public participation involving public input, to allow both interested and potentially affected parties to submit their views and present relevant facts and evidence to NERSA. This must happen before NERSA’s decision on whether to concur in the Minister’s proposed determination. In the spirit of public interest, NERSA is obliged to consider views from the public with either special expertise or a special interest regarding the appropriateness of extra generation capacity through nuclear power.

It has to be stated though, that the Minister of Energy, as a member of the Executive branch of government, enjoys a very wide discretion in how he exercises his power. However, as the Western Cape High Court made clear, any such power has to be exercised rationally in order to withstand the scrutiny of the Courts.

In the words of the Court,

Mahlobo is spewing rubbish. Lets us all stand together against the bullies who are forcing nuclear down our throats. SA is not Russia.

Simply put, this means that the decision to pursue further nuclear power has to reflect that the Energy Minister considered all of the relevant facts, including those from interest groups with specialist knowledge, and thereafter made a decision which best encapsulates the best interests of the nation.

Thereafter, the Constitution requires that organs of state, when contracting for goods and services, must do so with due regard to principles of fairness, equitability, transparency, competitiveness and cost-effectiveness. This means that the entities, both foreign and local, wanting to provide South Africa’s nuclear energy will have to be open to rigorous public scrutiny, in line with the Constitution’s demand for transparency.

It would appear that the policy uncertainty, created by the differing stances of the Finance and Energy Ministers, is really the least of concerns in the future of power generation.

Ultimately, the cost of the nuclear energy plan is said to be R1 trillion, an amount which, as the Finance Minister attests, South Africa cannot afford. It stands to reason that should NERSA agree with the Minister of Energy’s plans, the costs of the nuclear programme will negatively affect spending on other social programmes, in the fields of education, social assistance, health services and housing. This, in addition to environmental concerns. It seems the proposed nuclear venture is one that South Africans can ill afford…