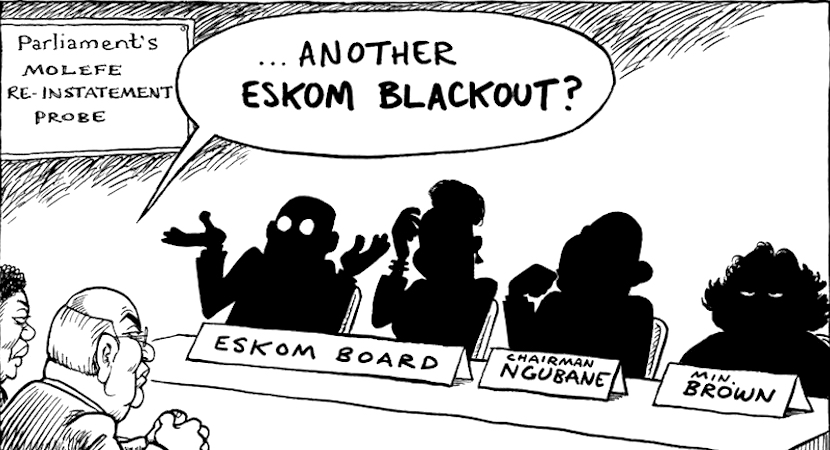 JOHANNESBURG — Minister of Public Enterprises, Lynne Brown, previously found herself wedged between Ebrahim Rasool and Helen Zille during a short stint she did as Premier of the Western Cape during 2008/9. But that during those years, Brown probably was prepared well for what we saw in Parliament last week, according to Ed Herbst. She may have learnt the art of denial in those years when an infamous Brown Envelope scandal erupted. Take a read… – Gareth van Zyl

The level of corruption, greed, blatant lying and pure unadulterated thieving is so high that it feels like we are all going to drown in it. – Lynn Harding of Somerset West in a letter to The Times 24/11/2017

Under the pressure of stern questioning, she was exposed as a petty politician who refuses to take responsibility for the mess her portfolio is in, blaming officials and sniping at MPs rather than engaging with MP’s questions like an adult. She can play the victim as much as she likes, but the public has not been fooled by this Mampara under whose watch the Guptas turned Eskom into a private enrichment scheme. – Lynne Brown Sunday Times Mampara of the Week 26/11/2017

Watching the ducking and diving Lynne Brown trying to slither and slime her way out of trouble on the live television feed from parliament during the state capture investigation last week was mortifying, particularly when she faced the scalpel-sharp interrogation of Pravin Gordhan.

As he pointed out at 10:23:50 of the YouTube clip during his cross-examination of Brown:

We had suffered the same sense of shame and embarrassment when the malevolent Dr Ben Ngubane, the attempted mine snouter, evinced similar evasiveness during the parliamentary inquiry into SABC corruption.

Unsurprisingly, his name cropped up repeatedly in this inquiry as well. He is, accordingly, held in high esteem by Loot-fully House.

Nausea and schadenfreude struggled for supremacy as the bile rose in my throat but then came a moment of comic relief when I recalled Manuel, the inimitable waiter in Fawlty Towers and realised that Lynne Brown must be his biggest fan.

Prior to Brown’s testimony, former Eskom chairperson Zola Tsotsi articulated his belief that there was clear link between Brown, the Gupta family and the shadowy Salim Essa.

Before that, Eskom board spokesperson Khulani Qoma testified that Eskom was all set to suspend Matshelo Koko after he had blatantly and brazenly lied during a Carte Blanche interview, but that Brown had intervened to keep Koko, quite literally, in the pound seats.

(This is normal for the ANC given the way in which the unspeakable Brian Molefe who has no known army combat record but is now earning R57 000 a month – your money and mine – as a bogus-bling ‘colonel’. No proof is proffered to justify that salary but the Sobbing Sage of the Saxonwold Shebeen is now setting new standards in SADF sartorial splendour by wearing his Sam Browne the wrong way round.)

From Sam Browne to Lynne Brown and, as Khulane Qomo put it:

“Minister Brown has gone to the end of the world telling us she is not wet‚ but she is right in the midst of water. Her DG is captured‚ her PA is captured‚ obviously her lover has interests at Eskom.

“Minister Brown lies‚ she lies all the time and she thinks we can’t see it.”

The smell of corruption acid-etching the nostrils as Lynne Brown went through her ‘I know nothing!’  shtick would have been familiar to Cape Town’s small media community which watched – with despair and a growing sense of prescient trepidation – the Ebrahim Rasool/Marius Fransman/Lynne Brown Brown Envelope scandal unfolding in 2011. They might recall similar obfuscating and evasive tactics being employed by Brown on that occasion.

Open warfare had broken out in the ranks of the ANC in the Western Cape, a province it corruptly governed between 2004 – 2009 thanks to the floor-crossing/thirty pieces of silver expertise of Marthinus van Schalkwyk, currently our ambassador in Greece.

It was the Rasool/Fransman faction vs the Skwatsha/Ozinsky faction and the sordid infighting was revealed when Ashley Smith, a political writer on the Cape Argus, confessed under oath that he and a colleague, Joseph Aranes, had been suborned by Rasool and Fransman to write articles favourable to their paymasters but detrimental to the Ozinsky/Skwatsha faction.

Further credence was added to Smith’s confession when Benny Gool and Roger Friedman – whose credibility is manifest in their PR relationship with Archbishop Desmond Tutu – spoke out about how Rasool and Fransman had tried to use their company, Oryx Media, to criminally launder the illicit payments to Smith and Aranes.

This was part of their testimony during an ANC Brown Envelope Scandal inquiry conducted by Deputy Justice Minister Andries Nel who, operating strictly in terms of ANC Super Snouter guidelines, did not interview Rasool and Fransman. The innately-corrupt ANC ignored a PAIA application for access to this report because, in terms of its version of transparency and accountability, it did not want the public to know about this bribery scandal – until a court order compelled its release.

Rasool, having ticked all the ANC due diligence boxes and having displayed his National Democratic Revolution mettle, was chosen to be your ambassadorial representative and mine in Washington. His replacement as Premier, Lynne Brown, then became embroiled in the Brown Envelope scandal herself when she secretly recorded an interview she conducted with Vukile Pokwana. He was then the accounts director at Hip-Hop Media which played a cardinal role in the Brown Envelope scam and was handsomely rewarded – your money and mine – for so doing.

In terms of what Michael Hulley would call the Stalingrad Strategy and what Lynne Brown would now probably term the Manuel Strategy, she refused to surrender the Pokwana recording to her successor as Western Cape Premier, Helen Zille.

For Brown this was a useful rehearsal for her equally unedifying performance in parliament last week. It was clearly in conflict with Human Rights elements of the Constitution which decree that South African citizens are entitled to information which impacts on their lives. We know however how contemptuous the ANC is about the Constitution and that, given the voting in the last no confidence debate, the party is supportive of JZ783 in this regard. No less than 177 ANC MPs gave Zuma’s corruption their enthusiastic imprimatur and wholehearted endorsement and one can safely assume that Brown was one of them. These are the same MP’s who relentlessly attacked Thuli Madonsela’s Nkandla report. You are known by the company you keep and, as Nomboniso Gasa pointed out at the recent Daily Maverick debate:

Having been pulverised by the bombshell testimony of the Eskom executives, Brown proffered what she hoped would be her get out of jail free card – she testified that she had referred two decades of ANC–driven and supported systemic corruption at Eskom  leading to the current Zuptoid Turdberg era, to the Special Investigations Unit.

We know from the Matilda Gaboo case that even when the SIU recommends prosecution, nothing happens because Loot-freely House is calling the shots.

The Hawks declined to prosecute Rasool despite the prima facie evidence of Ashley Smith, Benny Gool and Roger Friedman and we know that the only person in ANC history who was quickly and efficiently investigated, charged and jailed leading to a forfeit of criminally-acquired assets was Cynthia Maropeng – and that was only because she stole not from the fiscus but from the ANC itself. The ANC wanted to send a stern message to its members: corruption is an encouraged norm – ask Chancellor House, they’ll tell you – and stealing from the fiscus is its de facto policy – ask the Zuptoids, they’ll tell you – but woe betide you if you steal from us. Please join the queue at the trough and duck when the bullets start flying.

We also know from the ANC’s founding principles of the Tsunami of Sleaze that if, despite its best efforts, its deployed cadres are jailed, they will only serve a fraction of the imposed sentences – Allan Boesak and Tony Yengeni being obvious examples. Boesak served one year of a three-year sentence and was then pardoned by President Thabo Mbeki and Yengeni served five months of a four-year sentence. This was in stark contrast to the ethos of the National Party which, during the apartheid era, insisted that the criminals within its ranks serve their full terms.

This is what happens when a country’s captured police force and prosecutorial arm serve not justice but the current political elite.

Responding to Brown in this regard, Pravin Gordhan contemptuously dismissed her proffered exculpatory SIU olive branch at 10:24:30 of the above-mentioned YouTube clip, when he pointed out the obvious:

Brown said she did not agree, apparently because she has either never heard of Shaun the Sheep or regards his conduct not only as normal and acceptable but as laudable.

(The news that the Matshela Koko disciplinary hearing is falling apart as witnesses refuse to testify because they fear for their lives shows that Gordhan was right and so was Zwelinzima Vavi when he warned that the ANC was creating a Mafia state. )

In his testimony, Khulani Qoma mentioned Lynne Brown’s lover – a clear reference to Ingrid Tufvesson who, with the help of Matshila Koko, is alleged to have snouted some lucrative oil-related tenders even though she has no experience  or track record in the oil industry.

If this is true, it would be business as usual in the continent’s newest and ANC-created kleptocracy. The African National Congress is a murderous criminal enterprise which seeps corruption from every pore and whose contempt for the concept of ubuntu is a matter of court record. Does the Tufvesson oil deal not bring to mind the way in which Tullow Oil, one of the world’s leaders in oil exploration, had its concessions in the DRC confiscated and transferred to Khulubuse Zuma and Michael Hulley?  They immediately sold them on for billions of rands. That deal was predicated on the SA military coming to the aid of DRC President Josef Kabila should his position be threatened – what you might call a ‘blood for oil’ deal.

Listening to Qomo’s testimony about Brown’s lover took me back to a story related by a photographer working for Die Burger at the time of the Travelgate scandal. One of the people implicated was a travel agent, a woman who was reputed to be a very close friend of Lynne Brown – as a Google search might indicate.

The photographer’s brief was to get a photograph of this woman leaving the Cape Town Magistrates Court. Such photographs are normally very bland, showing a person in profile against a background of a red brick wall and the brass signage which adorns it.

Trying for something different, the photographer, using a wide angle lens, crouched in the gutter hoping to get a full-length picture of her against this background.

As the woman left court she spotted him and, in a coquettish drawl, posed the question:

Eish, these ANC folk, you can’t take them anywhere.

Well, actually, they don’t want to be taken anywhere – a needless distraction from their manic focus on the blood-stained rim of the trough, despite distractions like trying to find money for bribes, defining the terminology of the latest threats, collecting faeces for the next protest,  and deciding which upliftment program must be pillaged to fund the latest round of luxury car purchases so that the Cointreau Comrades can be chauffeured in blue-light, million rand Mercs and Jaguars.

Let them eat pap but no vleis.

Unless, of course, one is offered a relaxing holiday in Dubai.

But then again, he’ll probably echo the Mampara of the Week and Manuel …