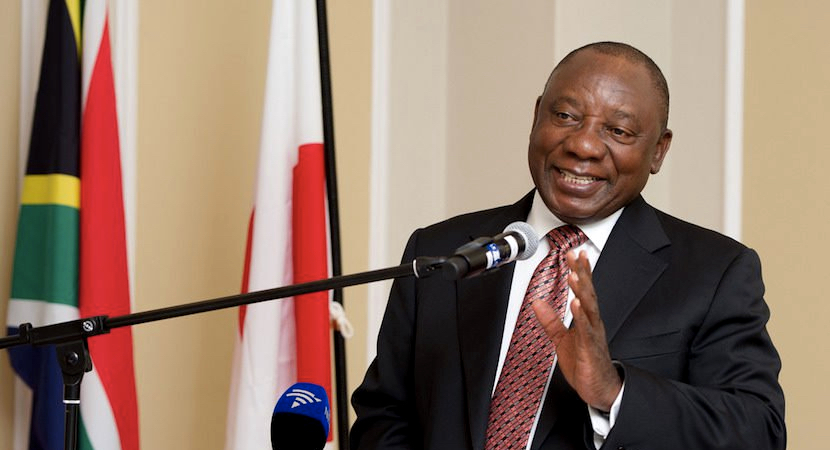 CAPE TOWN — If words can be a balm to the wounded soul of a nation, then ANC President Cyril Ramaphosa’s maiden speech is healing, promising to sweep corruption clean, mend broken institutions and doing what it takes to restore economic confidence. His first promise is all about speed; the State Capture Commission of Enquiry should be “immediate,” and focus on former Public Protector Thuli Madonsela’s recommendations, not the broad sweep of corruption impractically dating back to the apartheid regime. This flies in the face of calls made by Madonsela’s successor and Zuma. Giving us an early view of his consummate negotiating skills, Ramaphosa labelled the recall of Zuma a ‘very delicate matter,’ stressing that Msholozi should not be humiliated. He does not want to ‘divide the nation,’ Cyril-speak for walking the tightrope of an NEC evenly split between Zuptoids and reformists. His party will hold a conference/workshop on how to institute the elective conference resolution on land expropriation without compensation – thrashing out how to deal with the policy caveats of not harming the economy, agricultural production and food security. Significantly, he highlights already-redistributed land lying derelict. The policy caveats are a classic example of party-split compromise, emasculating the base assertion. Ramaphosa has met one-on-one with Zuma about the State Capture enquiry, with the ANC dismissing speculation that Nkosazana Dlamini-Zuma was agreed on as the nation’s Deputy President. Cyril holds all the cards. We can’t wait to see them played. – Chris Bateman

The investigation into allegations that President Jacob Zuma oversaw “state capture” by allowing members of the Gupta family to influence cabinet appointments and the awarding of state contracts should focus on these pressing matters, Cyril Ramaphosa, President of the ruling African National Congress and Deputy President of South Africa, said in an interview aired on Sunday on broadcaster eNCA’s website.

“There are those calling for a broadening of the commission and going back to ’94,” or even earlier, Ramaphosa said. “Don’t delay it, wrong things have been done that are known by people who are known — and those are the ones we must investigate.”

Zuma announced on Tuesday that he will appoint a commission of inquiry into allegations that the Gupta family was allowed to influence state decisions, abiding by a court-ruling which ordered him to do so. Ramaphosa, 65, took over control of the ANC at the party’s national conference on Dec. 18 from Zuma, whose tenure as the nation’s president has eroded support for the ANC and led to mounting calls from within its ranks for him to resign.

(Bloomberg) — South Africa’s ruling-party leader, Cyril Ramaphosa, said that while Jacob Zuma’s government must obey the decisions of the African National Congress, he doesn’t want to “humiliate” the president and divide the nation.

Ramaphosa, speaking in a television interview broadcast Sunday by Johannesburg-based eNCA, said the ANC has to be careful about deciding on Zuma’s future as the nation’s leader before he is due to step down in 2019 when general elections are scheduled, calling it a “very delicate matter.”

Ramaphosa, 65, said his discussions with Zuma since taking over the leadership of the ANC have gone “very, very smoothly.” A commission of inquiry into allegations that Zuma oversaw “state capture” by allowing members of the Gupta family to influence cabinet appointments and the award of government contracts must go ahead without delay, he said.

He asserted that the ANC wields ultimate power over the government and its members.

Read also: The lessons that Jacob Zuma can learn from PW Botha. MUST READ!

Ramaphosa’s interview was broadcast a day after his first major policy speech since winning the presidency of South Africa’s dominant party at a conference last month. In the address, he vowed to fight graft, revive a struggling economy and restore investor confidence that has been eroded under Zuma’s scandal-ridden administration.

“The country is yearning to put behind all these horrible things that have to do with corruption, state capture behind us,” Ramaphosa said. “The sooner these are all done the better because we want to move on, we want to move on to a better life.”

Ramaphosa, the nation’s current deputy president and one of the richest black South Africans, is a former labor-union activist, businessman and was the ANC’s lead negotiator in talks to end apartheid in the 1990s.

The ruling party must “begin the process of moving away from the bad practices and bad culture that has crept into the ANC,” Ramaphosa said. “Things such as corruption is a big thing in the ANC. It’s no longer a perception; it’s an issue that needs to be addressed head on.”

Under Zuma’s rule, the ANC suffered its worst-ever electoral performance in municipal elections in August 2016 when it lost control of Johannesburg, the economic hub, and Pretoria, the capital.

S. Africa’s Ramaphosa says no need for nervousness over land 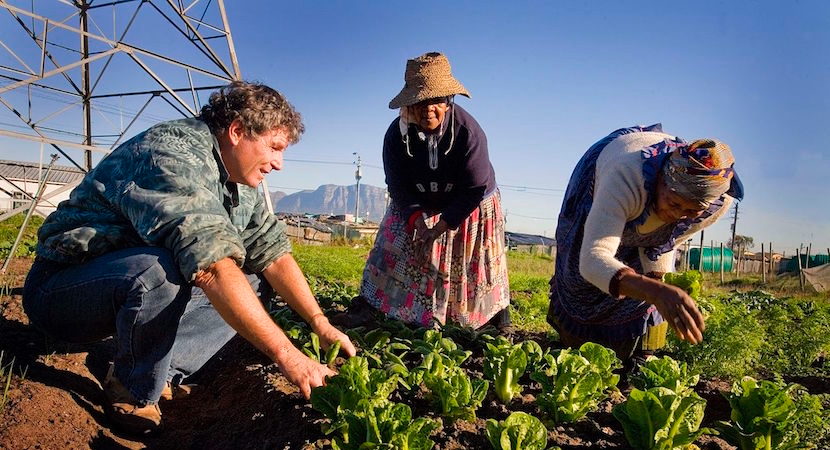 “Land is a very broad, as well as a complex issue and it has to be handled very delicately because around land there is quite a lot of emotion,” Ramaphosa said in an interview broadcast Sunday on eNCA. “We will have a workshop or a conference on land and look at all its various aspects and beyond that we will come up with a clear policy, or direction on how this will be handled.”

The ANC decided at its conference in December that it would propose amendments to the Constitution to seize land without compensation to speed up the process of giving back black people more land that they were stripped of during white rule. The party said this will only be done in a manner that doesn’t harm the economy, agricultural production or food security. South Africa’s is the continent’s biggest corn producer and exports crops ranging from grapefruit to macadamia nuts.

White farmers own almost three-quarters of South Africa’s agricultural land, according to a land audit by farm lobbying group AgriSA published last year. The amount of land held by the government and racial groups who were disadvantaged under white-minority rule rose to 26.7 percent of South Africa’s agricultural land in 2016, from 14.9 percent in 1994, according to the audit.

Ramaphosa said he would like a study of farms that have been reclaimed or redistributed to black South Africans since 1994.

“The real issue, though, is that most of the redistributed land is lying derelict at the moment,” he said. “It’s not being worked.”

(**Editor’s note: We’ve highlighted among the most relevant parts of Ramaphosa’s speech below, those being the tasks the party plans to carry out in future. You can read his full speech by clicking here.)

TASKS OF THE AFRICAN NATIONAL CONGRESS

In giving practical expression to the resolutions of the 54th National Conference – and inspired by the life, contribution and vision of Nelson Mandela – the following priority tasks for the movement have been identified for 2018.

– We shall undertake a deliberate programme of organisational renewal that decisively addresses problems of division and dysfunction within the organisation. This will include concrete steps to empower members of the ANC to determine the direction of the movement and to decide – free from manipulation and coercion – on who should lead the movement. They need to guide its policies, priorities and programmes informed by the needs and concerns of the communities in which they are located. We shall therefore work to get rid of the gate-keeping, vote buying and undue interference that strips ANC members of their rights, responsibilities and influence. We will build a membership system that is transparent, efficient and credible.

– We shall work to restore the integrity and credibility of the ANC. We need cadres who are committed to serve no other interest than the interests of the people, who seek no advantage for themselves or their families from the positions they occupy, and who safeguard public resources. We shall strengthen the Integrity Commission to deal with matters of ethics in the organisation and finalise its standing and the status of its decisions by June this year.

– We shall undertake measures to bring the ANC closer to the people, building our branches as vibrant, dynamic units that take up the most pressing social and economic challenges in our communities. Our branches need to attract the most active, brightest, most upstanding, and most committed members of our communities – young and old, women and men, black and white – and thus become examples of the best citizens that our society offers.

– The ANC will work with renewed determination to unite all South Africans – regardless of race, class or affiliation – around a shared vision of fundamental transformation. We need to restore the unity of purpose and sense of common destiny that was forged under the leadership of Nelson Mandela.

– We shall mobilise all social partners, in particular government, labour and business, behind an economic recovery plan. The urgency of this task is underlined by low levels of growth and job creation, constrained public finances, ratings downgrades and corruption which undermine efforts to tackle poverty and inequality. It is only through working together, in pursuit of a common objective underpinned by mutual respect and trust, that we shall be able to turn the economy around.

– We shall confront corruption and state capture in all the forms and manifestations that these scourges assume. This includes the immediate establishment of a commission of inquiry into state capture. The investigation and prosecution of those responsible will be given top priority. Mechanisms for the appointment of individuals to senior government positions, state owned entities and law enforcement agencies will be strengthened to improve transparency, prevent undue influence and ensure adequate vetting of candidates.

– We must work to restore the credibility of public institutions, including state owned enterprises and law enforcement agencies, by addressing excessive turnover in senior positions, undue political interference, poor coordination and corruption.

– As part of the work needed to improve access to relevant quality education, we must urgently develop and implement an affordable and sustainable funding model to ensure that poor, working class and ‘middle class’ students progressively receive free higher education. We must do this not only to promote social justice and redress the inequities of the past, but to ensure that we produce capable graduates on a scale that feeds economic growth and social development.

– We shall implement a comprehensive approach to land reform and agricultural development that utilises a range of mechanisms to accelerate the redistribution of land to black South Africans and to provide the necessary support to ensure that this is accompanied by an increase in agricultural production and food security. The NEC will develop proposals with regard toexpropriation of land without compensation aspart of the mechanisms available to government.

These are the central tasks that must occupy all ANC structures, leaders, cadres and members during the course of 2018. As we work to implement all the resolutions of the ANC 54thNational Conference, we are resolute in our commitment to make this the year in which we rebuild our movement and turn around the South African economy.