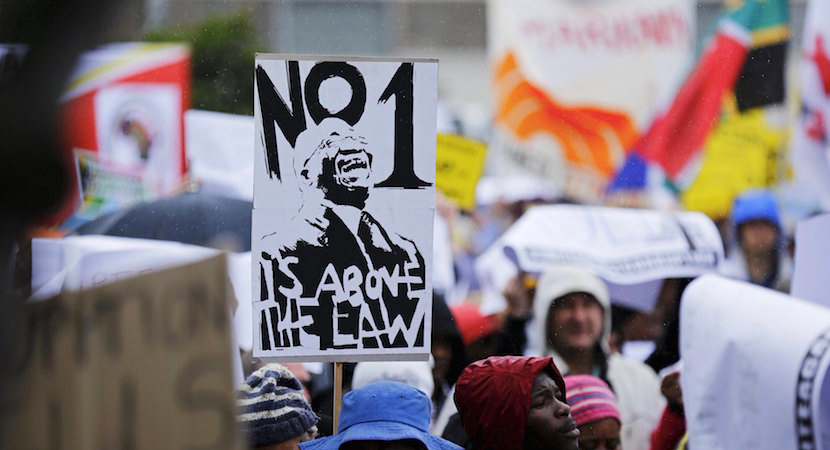 JOHANNESBURG — Veteran journalist Ed Herbst has, once again, penned some brilliant observations about our situation in South Africa today. By taking a step back and recounting memories of his days while covering certain stories about the National Party, he observes some parallels between that party and the governing party of today, the ANC. The reality is that politicians are of a fickle nature and it won’t be a surprise if we start seeing former Zuma supporters suddenly making an about-turn and throwing their weight behind Ramaphosa this year so as to keep their jobs. It’s the nature of politics and it seems to transcend eras. – Gareth van Zyl

While the Zuma hardliners still have a significant presence on the national executive committee, there is a sizeable middle ground that is expected to fall in behind the leadership of the day, giving enough advantage to Cyril Ramaphosa to effect the recall. – Hope as Zuma’s time runs out Business Day editorial 11/1/2018

Retaining power by maintaining party unity is the preoccupation of any political leader.

Retaining your job and it’s not inconsiderable perks is the preoccupation of any parliamentarian as the anchor quote on this article indicates.

In his inimitable way, Barney Mthombothi made precisely this point in his Sunday Times column of 7 January:

Too much is being made of the fact that Zuma’s lapdogs have made it onto the NEC and that they’ll do everything in their power to stymie any attempt to get rid of Zuma. These people may be toadies, but they’re no fools. They can’t die or kill for Zuma any more. He’s history. But they have children to feed and bonds to pay. Anyway, flunkeys — people without any discernible talent — always tend to gravitate towards those in power. That’s how they survive.

You won’t be surprised, for instance, to learn that some of them are already making furtive attempts to ingratiate themselves with the new leader.

A Zuptoid fightback has already started however with Sipho Seepe predictably using Iqbal Survé/Steve Motale and the Sunday Independent to lash out at the CR17 faction and his article takes hyperbole to extreme lengths:

These have been corralled under one roof to give an impression that theirs is a representative voice. But, in truth, it represents a small group of elites whose sole existence is to protect their material interests.

This sort of Bell Pottinger garbage was aptly summed up on Daily Maverick by Onkgopotse JJ Tabane:

When I read your piece I wondered why you are doing this, Prof? Why would you embarrass yourself like this? I then remembered that one evening I heard you argue fervently on ANN7 that Zuma should not be prosecuted cause ‘some of the evidence of his 780-odd charges may have disappeared or some of the witnesses could have died in ten years’. You did not say this in jest. Quite frankly your article says to me you truly believe that Zuma should be left alone to his own devices and bugger the ANC and the country. I have a lot of respect for you, Prof, but on this one you have lost your marbles. Those who are reading you anew must go and google some of your most outrageous defence of Zuma even in the face of total immorality in his march to power. It all constitutes a piece of shame and a failure to read the writing that is on the wall.

Seepe was not alone – suddenly up popped the hitherto-unknown ‘Transform RSA’ with a similar fire and brimstone warning  – that should the man who is as popular here as Robert Mugabe is in Zimbabwe be prematurely unseated, the Beloved Country would be plunged into hellfire and damnation and a slough of despond from which it would never recover.

Such dire predictions are routine in the struggle for political control and hegemony.

In early 1982, while working in parliament as camera operator for SABC news I accompanied the head of the political team there, Johan Pretorius, to a venue where PW Botha as head of the National Party government was holding urgent talks with the leader of the party in the Transvaal, Andries Treurnicht.

Botha had, upon becoming leader of the National Party in 1978, visited Soweto and repealed a number of the laws upon which apartheid was based, all of which were considered a betrayal of basic party principles by the Treurnicht faction.

Rumours of ‘broedertwis’ within the party had been increasing but the assembled press corps knew that nothing would come of this meeting and that the cracks would be papered over. Splitting the party was unthinkable, wasn’t it?

We knew that the door would open, that Botha and Treurnicht would appear, manifesting insincere bonhomie and smiling their fake smiles. They would announce that the talks had been … ‘Free, fresh, fair, frank and fruitful – blah,blah,blah’ and we would trudge off to file yet another meaningless story.

As the provider on the visual element of such a news story you focus on the door which will open, put your lens on wide angle, select the aperture which will provide the maximum depth of field – and wait.

Suddenly, to our astonishment, the door burst open, Treurnicht dashed past us and was gone in the blink of an eye – shouting over his shoulder Ek is klaar met daai kommunis, PW Botha! (‘I am finished with that communist, PW Botha!’).

Botha had done what his predecessor John Vorster had never had the courage to do – he had split the volk and Cyril Ramaphosa, according to Sipho Seepe and Transform SA, faces the same existential threat, a threat dismissed by Barney Mthombothi.

The Afrikaner right wing, defined politically by the subsequently-formed Conservative Party of Andries Treurnicht and the HNP of Jaap Marais, nevertheless remained a considerable threat which Botha’s successor, FW de Klerk, nullified with a referendum for white people on 17 March 1992. The vast majority of white South Africans took a decision which they knew would end white political hegemony – but they took that decision because they knew it was the right thing to do and they were tired of the burden which the apartheid albatross imposed upon them.

They thus became the first ethnic political grouping in human history to cede political power while still retaining control of the military and the police force.

The NP also retained, however briefly thereafter, the ultimate power.

Now I am become Death, the destroyer of worlds.

The military power of FW de Klerk and his government included nuclear power and, of its own volition, it ceded that power as well.

From the 1960s to the 1980s, South Africa pursued research into weapons of mass destruction, including nuclear,[2] biological, and chemical weapons. Six nuclear weapons were assembled.[3] Before the anticipated changeover to a majority-elected African National Congress government in the 1990s, the South African government dismantled all of its nuclear weapons, the first nation in the world which voluntarily gave up all nuclear arms it had developed itself.

For the benefit of the ANC and its imbongis, its obsequious bowing and scraping forelock-tugging flunkeys, let’s repeat that.

‘… the first nation in the world which voluntarily gave up all nuclear arms it had developed itself’.’

The Virtue Signallers and the Race Merchants are loath to acknowledge that but the Nobel committee was not.

But if, for John Vorster, splitting the volk was a bridge too far, he did not flinch when it came to ending a protracted civil war in Rhodesia which had already cost far too many lives and was threatening his own country’s security.

He gave Ian Smith an ultimatum – negotiate a political settlement or I will close you down – and Smith capitulated.

When it came to Smith’s immensely destructive successor, Robert Mugabe – the Operation Gukurahundi war criminal – the ANC could have followed Vorster’s courageous example but did not. In part because it has never met a despot it does not like while, of course, not being particularly fond of the Dalai Lama.

Brian Pottinger refers to this on page 308 of his brilliant book on the Mbeki era:

‘When I had debates on this issue with senior ANC members they would ask what options there were. When I reminded them gently of John Vorster’s solution to Smith’s intransigence, they regarded me as if I had shot their favourite dog. Whether it was from the memory of that hated apartheid ﬁgure or a recoil from the thought of actually having to do something about the growing Zimbabwe crisis, I could never quite work out.’

Ramaphosa has nothing to fear.

In his Sunday Times op-ed column in the last 2017 issue of the newspaper, Tony Leon quoted a Facebook post by a Johannesburg woman:

Ramaphosa has won – I am weeping with joy

Just as the majority of white South Africans applauded the courage of FW de Klerk in ridding us of the apartheid albatross and dismantling his nuclear arsenal so, too, will the good people of this country applaud Ramaphosa if he rids us of the Zuma curse.

We have, thanks to the majority of ANC parliamentarians, endured that onerous burden for far too long.

We have, for far too long, been sleepwalking through a nightmare.

The joke has worn thin.

I leave it to one of our best wordsmiths, Barney Mthombothi, to write the epitaph of the man who has once again made us a pariah on the world stage and an international laughing stock in embarrassment after embarrassment.  Mthombothi made this comment in the Sunday Times of 17 December last year:

Zuma’s biggest sin is that he has stained and soiled our collective soul. He’s corrupted our morals. Our proud democracy now lies in tatters.