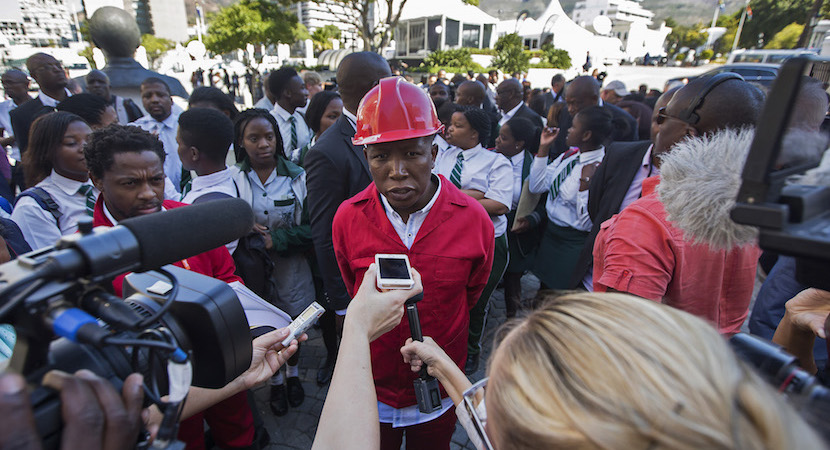 CAPE TOWN — If you think Julius Malema’s headline grabbing antics are puerile and mostly harmless in the random improbability drive that seems to power the good ship Mzansi, you’re wrong. Gareth van Onselen, who heads up the Politics and Governance arm of the Institute of Race Relations (IRR), exposes the primary role played by Malema in destroying the NPA’s original case against former President Jacob Zuma. He also explains why being benign is an alien concept for a man who sees a foreign enemy agent in any persistent questioner. In creating a conspiracy narrative around the subsequently aborted prosecution of Zuma, Malema defied all evidence, logic and reason – establishing him as the most poisonous and unaccountable leader of the time in the ANC. After Marikana, he somersaulted from vowing to defend Zuma with his life to being hell bent on taking Msholozi’s political life, yet the EFF leader still enjoys some weird protective shield that seemingly renders him immune to censure. It’s a timely reminder that while things are getting better, they could very quickly get a whole lot worse. We’ve an election soon and the EFF are playing the masses so shrewdly they’ll either prompt an ANC offer they can’t refuse – or damage it severely in a thuggish street fight. – Chris Bateman

‘Year One: How Julius Malema destroyed the NPA’s case against Jacob Zuma in 365 days’, is the latest report from the Institute of Race Relations (IRR).

Written by the IRR’s Head of Politics and Governance, Gareth van Onselen, the report examines the primary role played by then ANC Youth League leader Julius Malema ‘in the destruction of the National Prosecuting Authority’s original case against former President Jacob Zuma’.

The report spans the course of a year, from Malema’s election as ANCYL president in April 2008 to the NPA’s decision to drop all charges against Zuma in April 2009, and is told using Malema’s own words, drawn from over 2 000 news stories that covered that period.

Van Onselen writes: ‘Its purpose is twofold. The first is to demonstrate how Malema led the public charge, in a sustained and systematic fashion over twelve months, to promote the narrative that the case against Zuma was the product of a political conspiracy, with former President Thabo Mbeki at its heart, and to show how, to that end, he helped facilitate and justify to the NPA the destruction of the integrity of the judicial system, the Directorate of Special Operations (the Scorpions) and the ANC itself.

‘The second is to demonstrate how Malema swept the media up with him, how rhetorical grandiloquence and blunt demagoguery captured the public imagination while simultaneously destroying debate; how he established a repertoire in which personal and often petty politics moved to the front pages; how he drove a conspiratorial fantasy without evidence, and entirely hostile to evidence, reason and logic; and, finally, on the back of this all, how he established himself as the most poisonous and yet unaccountable leader in the ANC, an immunity he enjoys to this day.’

Notes Van Onselen: ‘It is a remarkable fact that for all the damage Julius Malema inflicted on the justice system, he suffers no commensurate reputation. An examination of the period April 2008 – April 2009 reveals the extent not only of Malema’s contempt for the rule of law, but its representatives.

‘He was not alone, but he led the charge, defining both the tone and the message of the assault.’

As a result, Van Onselen says, ‘South Africa, and the pursuit of justice, is only now, a decade later, getting back to where it was in April 2008. It is vital we never forget.’