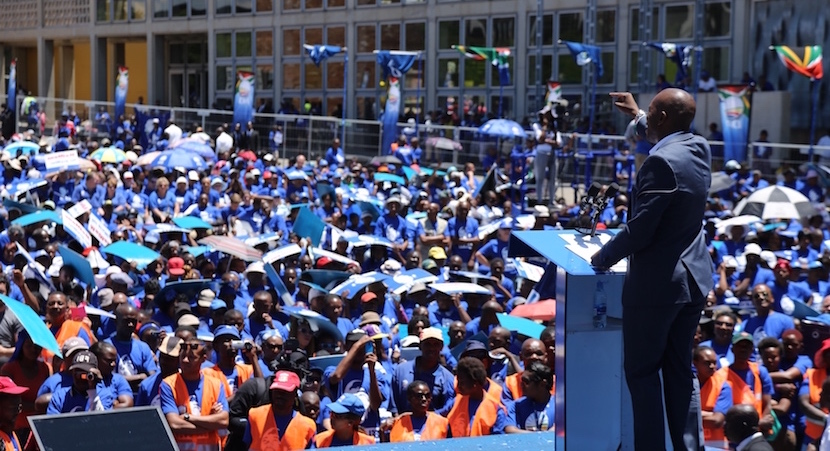 CAPE TOWN — The DA has asked central government to deploy soldiers to the Cape Flats to curb violent crime, gangsterism and drugs 13 times in the past six years and last week organised a “SendTheArmyNow” march from Nyanga to Manenberg. Former police minister Fikile Mbalula was in favour of calling in the troops, but his successor, hat-wearing Bheki Cele, who looks for all the world like a drug-lord himself, disagrees – hence the DA march calling for him to honour Mbalula’s earlier alleged undertakings. For a little while there it looked for all the world like Western Cape Premier Helen Zille and the ANC security establishment had found a tiny piece of common ground. But here’s a completely different take on matters, one that brings in some missing context in an eloquent parody of militaristic solutions. Shannon Arnold is a self-confessed feminist and thought-provoker with an honours degree in Political and International Studies, currently reading for her MPhil in Gender and African studies. See whether you fit in anywhere on her DA continuum, from inflexible dogma and a firmly anchored world view all the way through to a more empathic liberal view that embraces social, legal and historic determinants. – Chris Bateman

Considering that 2019 is an election year and there’s a high level of violent protest action going on in the country at the moment, let’s bring up an old debate.

If you are a South African, you would know this statement full and well: “If they don’t get the services that the ANC promised, then they should vote the ANC out of power”.

Can you hear that ‘they’? It is no ordinary ‘they’. That ‘they’ draws a line, it does not refer to us, it refers to them, and it marks them as different from us, so much so that they are ‘they’ and we are us. Further, don’t you find it interesting that ‘us’ have the social, political and economic power to delineate them as ‘they’? They love the ‘they’, don’t they? Just in case you are not following, ‘us’ are typically white, upper-middle class South Africans who have the resources necessary to buy their citizenship – meaning that their affluence can afford them education, healthcare, security, and political participation. Whereas, ‘they’ are those Black South Africans who are marginalised from their access to citizenship in the same way they are marginalised from participation in the economy. Make sense?

Tongue twisters and riddles aside, I find this statement to be deeply ironic for two reasons. Before I go into the first, it’s probably necessary that I highlight that the ‘us’ group are typically those who vehemently vote for the DA. And when I say that, I mean the ‘die hard’, ‘I could never vote for any other political party’, ‘not voting means you can’t complain’, ‘what are the hooligans doing now’, kind of DA voter.

If you have ever had a conversation with a vehement DA voter you’d probably know that they voted for the DA simply because, “Have you been to Cape Town? It’s like a different country. Everything is so efficient, they even have bicycle lanes on the roads” – those bicycle lanes, don’t even get me started on those. Great, let’s have this conversation about efficiency and service, let’s do it.

Now, we have arrived at my first reason. The city of Cape Town is the 15th most violent city in the world, the next South African city being Nelson Mandela Bay at 34th. Escape from the beautiful beaches, leafy suburbs, and trendy gentrified (Read: poor people used to live here but were pushed out due to unaffordable rates and taxes) city centre that surround the mountain and go into Cape Town, real Cape Town, where the majority of people (Read: Black) live, work and die.

You will notice that Cape Town is not only South Africa’s capital, but also its murder capital. People are so insecure that there is now a conversation about placing the army in the streets to monitor gang activity. The army? Really, the army.

If you’re unfamiliar with security studies, something is deemed to be an issue of national security if a securitising actor (Read: Helen Zille) declares it to be so, and thereby presents the issue as something that requires extreme measures to, for want for a better phrase, ‘get the situation back under control’. ‘Extreme measures’ implies that the act of securitisation goes beyond the realms of normal political procedures. We have a lot of these in South Africa, all of which have been outlined by our democratic (emphasis on democratic) Constitution.

Now, hopefully, you get the picture. Bringing in the army is effectively saying that the normal democratic structures of government have failed to secure its citizens. All of its citizens? No, just the ones who don’t live around that pretty mountain. Yes, vote for the DA, Cape Town is so wonderful, you will have bicycle lanes.

Now, we have arrived at my second reason. Don’t you think it’s funny that vehement DA voters cry over black people voting for the ANC while still proceeding to protest against poor service delivery, and yet they offer the DA and its Cape Town murder rate as an alternative? Also considering the lack of service delivery in these areas due to their inaccessibility because of gang violence, surely then, following their logic, they should tell their fellow constituents to vote for an opposing party?

Before I have a whole bunch of naysayers talking about police capacity and other particularly exciting things, I’d like to bring this to your attention. Gang violence is not something that exists inherently within people, it is the result of multiple and varying social and economic ills: toxic masculinity, extreme poverty, social violence and exclusion, and a deeply recurrent path dependency of behaviours that have been learnt from past conditions of deprivation. Talking about police capacity is talking about reactionary problem solving, it’s an ‘ask for forgiveness and not permission’ kind of attitude.

My question is as plain as it is simple, if the DA weren’t so preoccupied with bicycle lanes and were more preoccupied with the real social and political ills that have entrenched themselves through past and present systems of oppression, would there still be such terrible gang violence in the city? And then, and only then, would they be willing to provide the goods and services that their constituents have right to as citizens of this country, as they claim?

Maybe. You tell me. But, I can sure as hell tell you that putting the army in those streets will be the last official message to those residents that their citizenship is null and void, and THAT is definitely not the solution to anything.