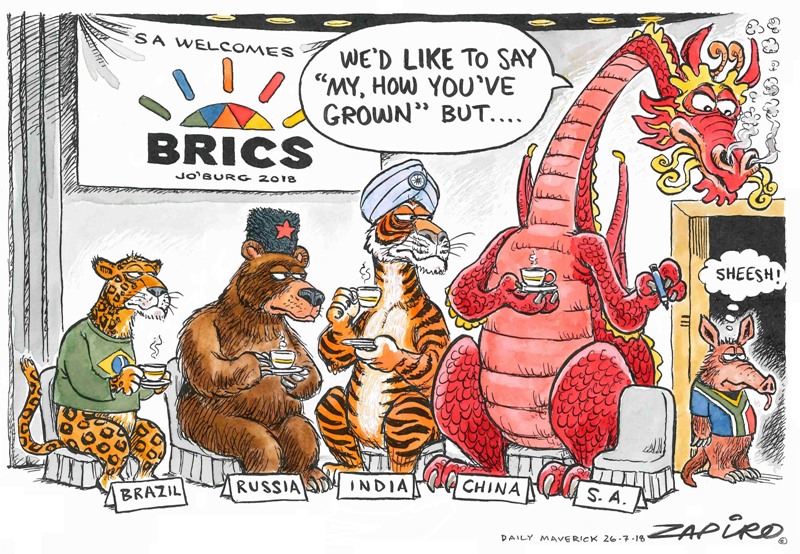 CAPE TOWN — Just one day after political analyst Susan Booysen starkly outlined the ANC’s long liberation struggle alliance and current links with China, independent strategy advisor Shawn Hagedorn, picks up on how the ruling party ironically continues to ignore life-saving development economics lessons from the thriving People’s Republic. It’s a must-read, full of examples of how President Ramaphosa, “surrounded by kleptocrats and Marxists who ignore how most countries are banishing extreme poverty,” continues to tolerate and even promote wealth redistribution – at the cost of economic growth and development. Great for timorously holding a fractured party together and hanging onto power short term, but a slow political death given our hungry, jobless army on the march. Hagedorn says policy-makers are obsessed with equality – and that unless they wake up and smell the roses, most South Africans born in 2000 will go to their graves never having been gainfully employed. That’s scary. Rapid poverty alleviation requires selling goods and services into deep-pocketed markets instead of sharing policy positions with failed states. Build public sector capacity and recognise the private sector’s huge capabilities instead of tying it up in redistributive red tape, he pleads. Suggestion; how about sending comrades to China to study development economics instead of political ideology? – Chris Bateman

SA produces global stars in many fields while being devoid of what it needs most, and what China and India excel at creating: commercially savvy experts in development economics. China further benefits from remarkable institutional capacities reflecting its having fused itself into a semi-modern state over two thousand years ago.

As the two countries are polar opposites regarding policies and trajectories, China’s leaders can’t be bullish on SA. For the same reason, no country’s game plan can better inform SA’s policy makers. This country must learn from the successes and failures of its BRIC competitors while focusing on building alliances with wealthy nations that support high growth through importing goods and services.

From China’s perspective, SA is like first-year university students infatuated with their own opinions and potential but with little interest in grasping today’s complex success determinants or how today’s world came to be. Given they lead a huge, and hugely successful country with a long, varied history, for China’s elites apartheid’s legacy resembles a relatively normal challenge to be overcome, however imperfectly, followed by moving on to transcend other impediments while grasping opportunities.

Little credibility can accrue to the small number of today’s governments unable to overcome endemic poverty. China’s current leaders grew up under Maoist policies which starved tens of millions while impoverishing nearly all Chinese. Subsequent rulers then guided astonishing successes at home while, unhelpfully, embracing the likes of Chavez and Mugabe, who bloviated on justice issues, enriched themselves, and imploded their economies.

Given its long-term outlook, China recognises SA is unlikely to achieve broad prosperity during the lifetimes of its current school leavers. A great awakening regarding how economies develop must inform profound policy pivots. SA’s recent “new dawn” presages neither.

President Ramaphosa is surrounded by kleptocrats and Marxist who ignore how most countries are banishing extreme poverty. SA’s politics unite liberation party allegiances with a constitution that enshrines the power of party bosses. Thus both resistance to change and rent-seeking are encouraged; meanwhile, deep-rooted poverty risks political instability.

Being born in 1900 was a gateway to pain across Europe and China. Western Europeans born in 1950, and Eastern Europeans and Chinese a generation later, witnessed extraordinary expansions of prosperity. Most South Africans born in 2000 are unlikely to ever be gainfully employed.

While China’s uniqueness, particularly its cohesiveness established over two millennia, can’t be imitated, its economic successes highlight universal lessons. Most are inversions of the central policy positions SA shares with various failed nations.

As physics is senior to engineering, development economics is senior to capital markets economics. In the early phase of China’s extraordinary growth, domestic capital markets expertise was conspicuously absent. Post-1994 SA has traveled the opposite path with opposite results. Imagine adroit tinkerers, devoid of physics training, indulging youthful fantasies to build a new-styled rocket – then looking on bewildered as it crashes.

Everyone has opinions about what is wrong with SA’s economy. These opinions mostly mix political biases with values. Conversely, identifying and implementing economic development solutions is a highly technical endeavour.

SA’s leaders hold many false beliefs. The country’s binding constraint is not insufficient investment. Rather, investor apathy is a symptom of SA having neither enough domestic purchasing power to fuel adequate growth nor sufficient competitiveness to spur exports. Impediments trace to policy choices. For instance, while it is politically tempting to portray big companies as unfair monopolies, it is unrealistic to expect less experienced teams with far fewer resources can prosper by increasing domestic market share amid an economy mired in long-term stagnation. Responses by SA large companies have included many unsuccessful investments in foreign operations.

SA’s lack of commercially-aware economic development expertise has led to policies which mitigate against steady clashes among big business, big government, and big labour. This, however, has come at the unnecessary and unaffordable expense of undermining: job creation; growth in small and medium-sized businesses; and the economic dynamism required to fully integrate into the global economy.

While China’s government has aggressively throttled back its direct economic involvement over the past 25 years, SA is threatening to double-down in the opposite direction. The proposed Competition Amendment Bill would provide bureaucrats sweeping powers to disrupt businesses of all sizes using “adverse effect” tests mostly intended to identify “unfair” advantages to those deemed monopolies. Since the bill was proposed late last year, evidence has accumulated that a key competitive advantage of larger businesses is the capacity to cover the burdens imposed by excessive government regulations.

What about the “adverse effects” of counterproductive regulations which traces to party bosses seeking to maintain their monopoly-like hold on Parliament?

The Competition Bill and the land debates showcase the ongoing presumption that SA has sufficient wealth and income that broad prosperity can be achieved through government directed redistribution. Commercially attuned development experts know that over reliance on redistribution becomes self-defeating as it precludes adequate growth. Alternatively, sustainable inclusive growth is difficult but doable and it can rapidly pummel poverty. Just ask China’s or India’s leaders.

Africa supplies raw materials to China which then creates hundreds of millions of jobs exporting goods to wealthy westerners. China’s unprecedented volume and rate of poverty alleviation began by importing capital and knowledge from the West while maintaining very high domestic savings rates. Unlike SA’s reliance on hot money today, if investors wanted to participate in the early years of China’s growth, they had to make long-term, illiquid commitments. China only developed its domestic capital markets after it established high growth.

Russia highlights the dangers of over reliance on resource extraction. Brazil and India offer many dos and don’ts on corruption and competing. China stands out by showing what can be accomplished through combining institutional capacities with a solid plan.

SA must prioritise building public sector capacities while recognising that it has tremendous private sector capabilities. The private sector will accelerate growth when public policies astutely blend commercial principles with political imperatives. SA’s current focus on redistributing domestic activities through undermining established businesses for the benefit of new black owned and managed businesses has been proven unworkable. Rather the two groups must combine their strengths to surge exports.

The BRIC countries are competitors which offer many valuable insights. None is more important than prioritising alignments with nations that will import goods and services.