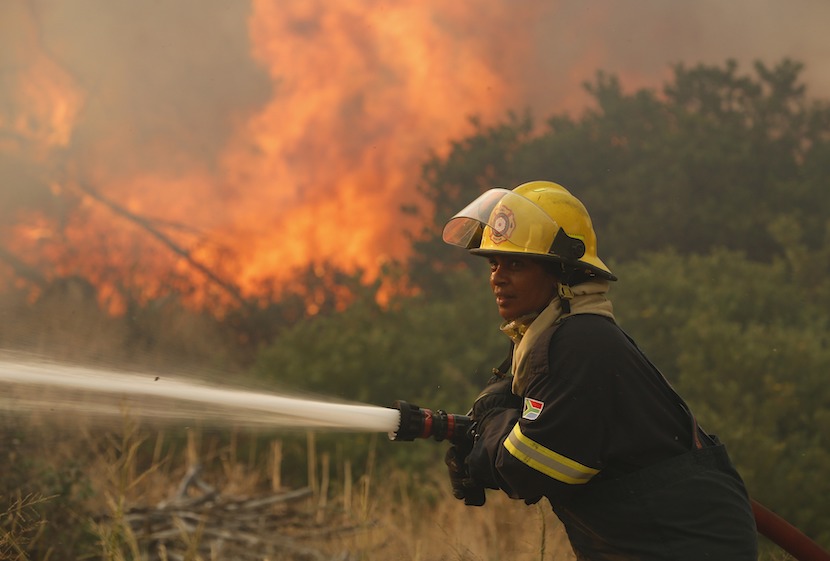 Wildfires are becoming more common and devastating as seen in recent cases in Australia and California. Many scientists now see a link between climate change and an increase in wildfires. A professor of Environmental Change at the University of Tasmania in Australia, David Bowman predicts that “wildfires will occur more often and be more destructive thanks to climate change and they will occur in places that had not had wildfires before”. Cape Town is no stranger to fires. If you have ever been lucky to live in the mother city, you will be familiar with the phrase, “die berg brand” and Capetonians will be glued to news media to get the latest information on the fire on Table Mountain to determine whether it will have an effect on them. Wildfires are necessary for Cape Town’s fynbos to grow healthily but as humans encroach on their habitat; this natural cycle that the fynbos needs, is disturbed. In an article in the Conversation republished with permission, there is a warning by scientist that the fire hazard in Cape Town needs to be managed carefully and that the lovely alien trees that we like to plant in gardens on the slopes of Table Mountain are contributing to the risk of devastating fires. – Linda van Tilburg

South Africa’s Cape Peninsula – home to the picturesque city of Cape Town – is part of the only region in the world with fynbos. Fynbos is the world’s most diverse vegetation type – even more so than tropical rainforests.

The city has encroached ever closer to nature, developing deeper into the mountain fynbos. Alien plantations have resulted in infestations of alien trees. Some citizens have been careless with inappropriate construction on the urban edge by building too high up on the mountains.

On top of this, various factors have resulted in a failure to maintain the desired fire regime, particularly of fires at 12-15 year intervals. As a result there has been a dangerous build-up of vegetation – fuel loads – in some places.

The Western Cape is entering the summer season – its driest, given that rains fall in the winter. Fears have been mounting that this year’s fire season might be the worst on record.

As a group of climate scientists and fynbos ecologists, we provide some context and background to the threat, based on available scientific research. We also point to what steps can be taken to help mitigate runaway fires in the region.

Fynbos is both fire-dependent and fire-prone. The Cape’s incredibly biodiverse fynbos plants need fire to survive and thrive. Fynbos animals have likewise adapted their life cycles to fire. For example, baby tortoises that hatch after the fire season with the first rains rely on the flush of green to survive.

Fynbos requires a burn every 12-15 years on average, otherwise species can be lost. Fires at shorter intervals (for example, less than seven to eight years) would eliminate many shrub species, while longer intervals between fires (over 30 years) cause senescence and die-off.

Fire frequency is not the only important factor. Season and weather conditions are also important. These affect fire intensity, which is important in stimulating germination of seeds stored in the soil.

Fire hazard is influenced by three factors: fuel loads, the weather and an ignition source (such as lightning, cigarette butts or arson).

The danger of fires in the Cape region this season is therefore partly dependent on how the fynbos has been managed over the past few decades. Good management includes promoting natural fire regimes and maintenance of fire belts.

If we have managed fynbos well, an ignition point will not become a disaster.
Under what conditions might ignition prove dangerous? When there are high fuel loads with suitable fire weather, this can result in disastrously uncontrollable fires.

When do we get high fuel loads? In two scenarios: when fire has been suppressed in fynbos for too long, and when alien trees such as pines, wattle, hakea and gums have invaded fynbos.

Given these factors, some areas of the Cape Peninsula constitute a higher fire hazard than others. The areas that burned in a large fire in 2015 have lower fuel loads and thus pose little fire hazard. Areas that didn’t burn in the 2015 fire are a greater fire hazard.

The highest fire hazard of all would be the slopes above Kirstenbosch, Newlands and the Back Table (the back of Table Mountain), where fire has been kept out for over 40 years. Areas such as Cecilia and Tokai, on the urban edge of the southern suburbs of the city, with alien pine and gum plantations, are also a big hazard.

Given the magnitude of the fuel loads, ignition in these areas would likely result in a disastrous fire.

Fire weather is also important. Under perfect fire conditions, a fire would be unstoppable if it occurred in areas of high fuel loads. The key weather drivers of fire hazard include antecedent rainfall and soil moisture, temperature, relative humidity, wind speed and wind direction. These weather conditions play a role in the short lead-up to ignition, as well as when the fire is burning.

There is also the issue of anthropogenic climate change – changes in climate brought about by human activities.

How might climate change affect fire hazard? The odds are good that this summer will be warmer than the average summer 20 years ago. This is because global warming is making the average climate warmer by around 0.2°C per decade.

But this is also true of recent preceding years, for example between 2015 and 2018. There is no evidence from a climatic point of view that this next fire season will have a higher hazard in terms of temperature than the past few years.

Most climate model projections agree that the Cape will become drier in future. But observed trends up to now are insignificant and contradictory. For example, a dry August and September may possibly leave vegetation this summer drier than in an average year. But, in fact, the Cape Town area is much less dry than during the drought years of 2015-2017.

When trying to understand anthropogenic climate change, we need to be able to separate it from natural variability. For example, if there is an active El Niño event, most regions of the world will be warmer than normal. To account for natural variability, we turn to seasonal forecasts.

Seasonal forecasts for this summer show varied results for temperature over the southwestern Cape. The South African Weather Service is suggesting a cooler than normal summer, and the European Centre is indicating a warmer than average summer.

For rainfall this coming summer, where the occasional rain events might help reduce dryness in the fuel load, there is little skill in seasonal forecasts. So it’s hard to say whether a potential lack of rainfall during the summer will increase fire hazard.

In itself, this combination doesn’t suggest a significantly higher fire hazard next season than in previous years. Therefore there is no evidence to suggest that the next fire season in the Cape will be anything out of the ordinary.

Despite this, we should still be taking precautions.

“Clear” refers to the removal of alien trees. Local residents can join alien clearing groups in their area. “Manage” refers to the need to support authorities on the Cape Peninsula – such as SANParks – to manage fynbos appropriately. This includes ensuring that, on average, 12-15 year prescribed burns happen.

And finally, education is needed to ensure that people understand climate variability versus climate change, as well as the relationship between fynbos and fires, so that future disasters can be avoided.