It could have come straight out of a Jaws movie, complete with circling fin, unsuspecting surfer, sudden attack, and threshing ocean waters. Watch this amazing video of Australian triple champion Mick Fanning miraculously emerge in one piece after fighting off what experts say was a great white shark during the final of the World Surf League’s J-Bay Open in Jeffrey’s Bay. It’s the stuff of surfers’ nightmares worldwide, and unfortunately not that uncommon in South Africa, particularly since our waters are among the world’s most densely populated with sharks. In the Reuters report that follows, Fanning explains how he fought off the predator by kicking and punching it in the back. People all over the world took to social media to express relief that Fanning emerged unscathed, and it hasn’t taken long for the jokes to come out. He certainly is one lucky and very brave man! – Marika Sboros.

Fanning was paddling out to ride his first wave when the unidentified species of shark surfaced next to him, knocking the 34-year-old off his board.

“I was just sitting there and I felt something just get stuck in my leg rope, and I was kicking trying to get it away,” Fanning, nicknamed “White Lightning”, told Fox Sports.

“I punched him in the back.

“I instantly just jumped away. It kept coming at my board and I was kicking and screaming. I just saw fins. I was waiting for the teeth.”

After the shark apparently swam away, the shaken three times world champion headed towards the beach, and was picked up by a support craft. The incident, which was broadcast on live TV, led to the cancellation of the final against compatriot Julian Wilson. “We are incredibly grateful that no one was seriously injured today,” the World Surf League (WSL) said in a statement. “Mick’s composure and quick acting in the face of a terrifying situation was nothing short of heroic and the rapid response of our water safety personnel was commendable. “The safety of our athletes is a priority for the WSL and, after discussions with both finalists, we have decided to cancel the remainder of competition at the J-Bay Open.” South Africa’s waters are among the most shark-infested in the world. A swimmer was killed by a Great White shark at Albatross Point close to Jeffrey’s Bay in 2013.

Can we re-nationalise Mick Fanning and get him to bat 3 for England at Edgbaston? #ashes#sharkslayer

J-Bay Great White could have been ‘curious’

By Jeff Wicks of News24

Durban – The Great White that attacked professional surfer Mick Fanning during the final heat of the J-Bay Open on Sunday may have just been curious, according to an expert.

Geremy Cliff, head of Research at the KwaZulu-Natal Sharks Board, said that whilst it is nearly impossible to ascertain why the shark attacked Fanning, it was likely that the animal was “investigating” the surfer.

Fanning had been bumped off his board and was almost dragged under the water by his ankle rope which was either severed or broke.

He was not bitten, and the only damage to his board was a slight depression.

@alechogg Give him a sharkfin soup!!!

“If we are speculating about the motive of the incident it is either that the shark was feeding and mistook the surfer and his board for prey. It could have been that the shark was curious and was investigating the surfer who was in its habitat or the third possibility is out and out aggression,” he said. “You sometimes have a situation where a shark is in feeding mode and then attacks a surfer and when it realises that the board is not the consistency or taste of prey they back off. Considering that there was no actual bite in this case I would tend to say that shark was just investigating Fanning. Cliff said that all things considered, Fanning was incredibly lucky. “He is obviously very fortunate not to have been injured or killed. We have on average six shark incidents per year and to date we have had three serious attacks, one in which a body surfer lost a leg,” he added. 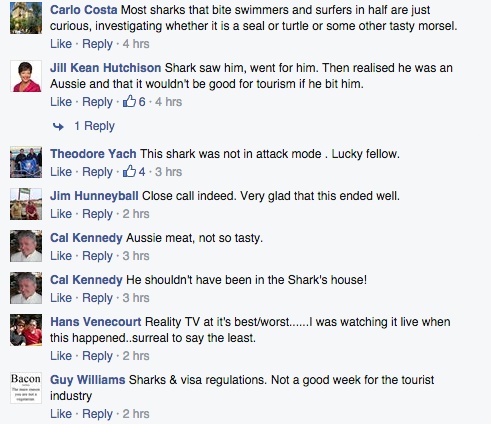 Fanning and fellow finalist Julian Wilson split the winner’s purse on Sunday, after the final stage of the competition was called off. A statement released by the World Surf League said: “The safety of our athletes is a priority for the WSL and, after discussions with both finalists, we have decided to cancel the remainder of competition at the J-Bay Open. We appreciate the ongoing support we have in South Africa and once again want to express our gratitude to the Water Safety Team.” – News24