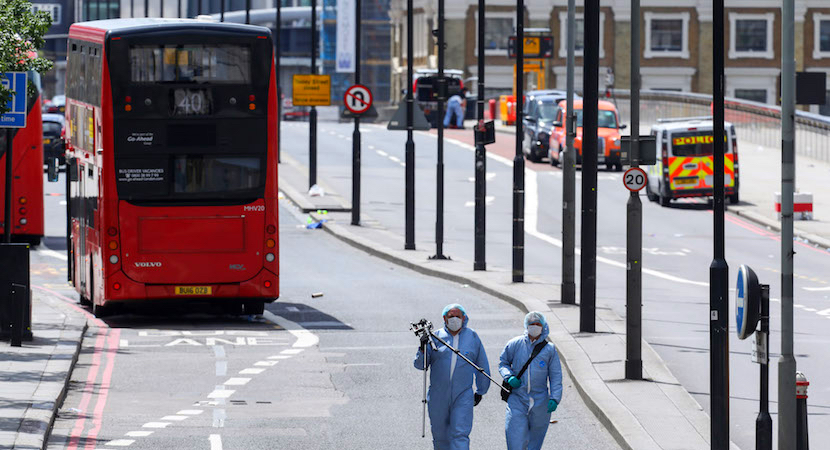 EDINBURGH: Arab broadcaster Al Jazeera has highlighted an alert from terror group Islamic State (IS), in which it called on its supporters to carry out attacks with trucks, knives and guns during Ramadan. This follows a brutal attack in London at the weekend in which at least seven people have died and dozens more have been injured. Last month, at least 22 people were killed and scores wounded when a suicide bomber detonated a device amid a group of mostly teenagers and young people at a pop concert in Manchester. The Muslim holy month began on 26 May and ends around 24 June. Although no group immediately claimed responsibility for Saturday’s killings in London, Al Jazeera says IS took to instant messaging service Telegram early on Saturday, urging its followers to carry out attacks with trucks, knives and guns against “Crusaders”. – Jackie Cameron

Counter-terrorism police raided several addresses in the east London suburb of Barking on Sunday, the force said, adding that searches were continuing there.

Four women were seen being led away by police by an AFP photographer, although it was not clear whether they were among those arrested.

At least seven people died and dozens were injured after attackers drove a van into pedestrians on London Bridge before stabbing people at bars and restaurants in nearby Borough Market on Saturday night.

Metropolitan Police Commissioner Cressida Dick earlier told reporters that she believed the imminent threat from attackers had been ended, but that a fast-moving investigation was still underway.

“We have a very large investigation ongoing, and we will be seeking to establish whether anyone else was working with or assisting in any way or helping in the planning of this attack,” she said.

Read also: The killers in our midst: Probing the rise of Islamic State ‘revolutionaries’ in Manchester

London Bridge is a major transport hub and nearby Borough Market is a fashionable warren of alleyways leavened with bars and restaurants that is always bustling on a Saturday night.

The area remained cordoned off and patrolled by armed police and counter-terrorism officers on Sunday, with train stations closed.

The attack occurred five days ahead of a parliamentary election and was the third to hit Britain in less than three months. Prime Minister Theresa May said the election would go ahead as planned on Thursday.

“It is time to say enough is enough,” said May in a televised statement outside her Downing Street office, where flags few at half-mast.

“We cannot and must not pretend that things can continue as they are,” May said, calling for a strengthened counter-terrorism strategy that could include longer jail sentences for some offences and new cyberspace regulations.

Al Jazeera’s Jonah Hull, reporting from London, said that repeated attacks like this have a huge impact and were deeply unsettling and worrying.

“But life does go on – this is an enormous city and from Monday I’ve no doubt that people will begin to go about their business as they probably already,” said Hull. “They are used now to seeing higher police presence on the streets.”

Two French nationals were among those injured in the London attack, the French president’s office said in a statement. Australia said two of its citizens were caught up in the attack and that one was in hospital.

The suspects were wearing what appeared to be suicide vests, but police said they were later established to be fake.

There was no immediate claim of responsibility.

The Islamic State of Iraq and Syria (ISIL, also known as ISIS), losing territory in Syria and Iraq to an advance backed by a US-led coalition, had sent out a call on instant messaging service Telegram early on Saturday urging its followers to carry out attacks with trucks, knives and guns against “Crusaders” during the Muslim holy month of Ramadan.

“Another witness said three men got out with long blades and randomly started stabbing people along Borough High Street. Other witnesses have also mentioned seeing knife victims,” he said.

Police ruled a third incident – a stabbing in London’s Vauxhall area initially thought to be linked to the other two scenes – to be unrelated.

London Mayor Sadiq Khan described the incidents as a “deliberate and cowardly attack on innocent Londoners”.

Al Jazeera’s Charlotte Bellis was near the bridge at the time of the attack.

“Paramedics had [those injured] on their sides. It was a bloody scene,” she said.

May’s office said she would chair a meeting of the government’s COBRA emergency committee on Sunday.

London’s transport authority said London Bridge railway station had been closed at the request of the police.

Three major London hospitals were placed on lockdown shortly after the attack.

The attack came days ahead of a June 8 general election, almost two weeks after 22 people were killed in a bombing at a concert in Manchester.

In March, an attacker ran people down with a vehicle on Westminster Bridge, killing four before stabbing a policeman to death outside Parliament.

World leaders quickly took to social media to offer their support to the people of London.

“Faced with this new tragedy, France is now more than ever supporting the UK. My thoughts are with the victims and their loved ones,” tweeted French President Emmanuel Macron.

Australia’s foreign minister described the incidents as a “shocking”.

Whatever the United States can do to help out in London and the U. K., we will be there – WE ARE WITH YOU. GOD BLESS!

US President Donald Trump also tweeted in connection with the London attacks: “We are with you. God Bless”.

He pledged support for the UK, but also used attacks to argue in favour of his controversial travel ban.