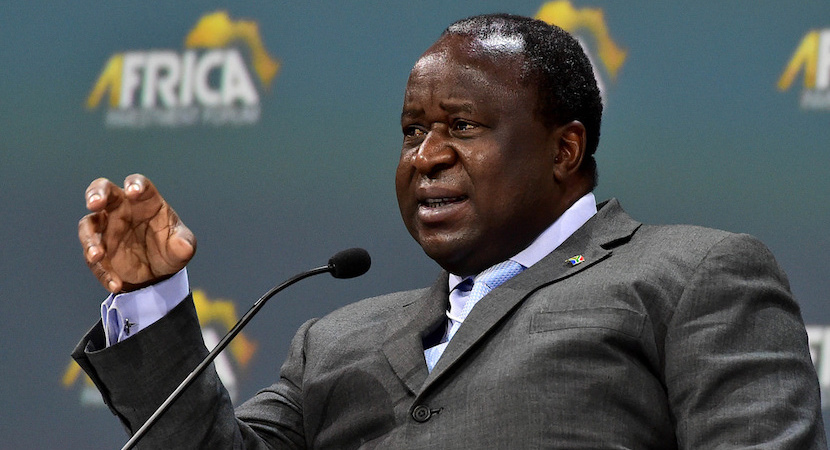 CAPE TOWN — The forbidding economic landscape that Tito Mboweni sketched during his mini-budget yesterday reminds me of a similar cabinet debut by his now almost-veteran health counterpart, Dr Aaron Motsoaledi. As a full-time health journalist then (nine years ago), I was frightened, yet reassured by Motsoaledi’s unusually honest and forthright public debut. Scared by his unadulterated confirmation of just how dysfunctional the State healthcare sector was. Reassured by his ability to out-horrify health journalists with stories of his own. Here was a man who’d worked in the heart of the beast, listened to others and wanted to fix things like his predecessor of a mere eight-months, Barbara Hogan. She focussed on over-expenditure, corruption and administrative dysfunction. (Highlighting their so-called ‘’Manto-inheritance,” does as much good as decrying the Zuma legacy). Mboweni didn’t share detailed horror stories yesterday. Yet, neither did he gild the lily. Despite this, economist Azar Jammine, says he failed to mitigate the three-year budget deficit increase by reigning in expenditure, predicting a further Moody’s credit rating downgrade and weaker exchange rate. Nine years after Motsoaledi’s debut, most of our State healthcare facilities cannot meet minimum patient-care criteria set by the Office for Healthcare Standards Compliance. Quo vadis Mboweni? Hope springs. – Chris Bateman

Consequently, the fiscal deficit for the period April to August turned out to be -R10bn less than over the same period of 2017. This outcome had been somewhat surprising given the fact that economic growth was ever more clearly coming in weaker than the 1.5% growth rate originally budgeted for by Treasury when compiling the 2018 Budget delivered in February.

In particular, one had been impressed by the manner in which the growth in revenue from VAT, at over 19%, had been exceeding the budgeted growth in revenue from this source, of 16%. Unfortunately, the updated budgetary parameters presented in the Medium-Term Budget Policy Statement (MTBPS) which was delivered by Finance Minister Tito Mboweni, revealed that the reason why VAT revenue growth had been overshooting budget was because there had been a lag in the refunding of VAT payments. These now have to be accounted for an amount of no less than R20bn.

In addition, much as expected, Treasury revised downwards its forecast growth for 2018 to just 0.7%, from the 1.5% figure according to which the original Budget was formulated. As a consequence, far from growth in government revenue for 2018/19 coming in at 10.1% as budgeted for in February, the updated growth rate in revenue is now put at just 7.9% and the projected growth in revenue from VAT has been massively reduced to just 10.1% from the original 16% growth rate budgeted.

Budgeted growth in corporate income tax has also been reduced quite sharply, down to 3.6% from 6.0% previously. Cumulatively over the next three years, budgeted growth in government revenue has been revised downwards by no less than -R76.6bn.

However, no commensurate reduction in government expenditure growth

As a result, the budget deficit for the current 2018/19 fiscal year has been raised by far more than anticipated, to -4.0% of GDP, clearly been a significant upward revision in budget deficits. Some will say that the reluctance to reduce the budgeted growth in expenditure is to be expected ahead of next year’s general election, but this is scant consolation for anyone trying to read into the MTBPS a sign of commitment to fiscal discipline.

With budgeted growth in revenue having been reduced cumulatively by -R76.6bn over the next three years, but budgeted expenditure being increased by R4bn, one arrives at the conclusion that the cumulative fiscal balance and borrowing requirement for the next three years has been revised upwards by – R80.6bn, or about R27bn per annum, equivalent to an increase in government bond issues of around R500m per week.

It is no surprise that the markets received the news quite badly, with the Rand immediately losing around 2% of its value and long-term interest rates increasing by around 0.2%. This is because the increased budget deficits of 4% of GDP or more in relation to economic growth of less than 2% per annum means the ratio of public debt to GDP has been revised back upwards to levels similar to those presented in last year’s MTBPS by then Finance Minister Malusi Gigaba, when the ratio of public debt to GDP was increased to over 60% of GDP.

The depreciation of the Rand and rising longterm interest rates consequent to the presentation of this MTBPS is an indication of the fact that markets are discounting an increased probability that Moody’s might indeed join the fray and downgrade South Africa’s credit rating sometime next year in response to the absence of a stronger commitment by the South African government to fiscal discipline. Irrespective of whether one agrees with the power of ratings agencies or not, the perception that Moody’s might join S&P in assigning junk status to South African government debt envisages South Africa’s bonds falling out of the World Government Bond Index to be followed by substantial capital outflows.

Essentially, the perception of an increased risk of credit ratings downgrades as a result of the bigger than expected increases in budget deficits and public debt to GDP stands to result in a weaker exchange rate in the intervening period than had been hoped for. It also increases the risk of the repo rate being raised by more than has been anticipated hitherto.

Little sign of switch in priorities from consumption to infrastructural investment

It is tempting to commend some of the language used in Mboweni’s first budgetary presentation since taking office insofar as it appears to address some of the key imperatives needed to uplift the growth of the South African economy. Specifically, Mboweni began his speech by suggesting that “we cannot continue to borrow at this rate”. He went on to say that we must choose to reduce the structural deficit, especially the consistently high growth in the real public sector wage bill and must choose public sector investment over consumption. He also made the point about the need to reconfigure SOEs and to encourage cooperation and collaboration between private and public sectors.

The problem is that it is difficult to identify any sign of this happening within the budgetary parameters. On the contrary, the growth in compensation of employees remains at 7.4% per annum, more than 2% above the projected inflation rate. Whilst the share of compensation of employees is projected to decline slightly, from 35.2% in 2017/18 and 2018/19, to 34.6% by 2021/22, there is no countervailing projected increase in the share of payments for capital assets, which declines marginally from 5.4% of government expenditure in 2018/19, to 5.3% in 2021/22.

Instead, one notes a progressive increase in the share of debt servicing costs, from 10.8% of spending in 2018/19, to 11.8% in 2021/22. In other words, resources which should be allocated to more vital areas of social spending are increasingly being redirected towards paying interest on a rising share of public debt.

Probably the most encouraging feature to draw from these latest figures is that the government has reprioritised spending on education somewhat, away from post-school education and training, back to basic education. The three-year growth in post-school education and training, which had been revised sharply upwards following ex-President Zuma’s announcement of free tertiary education for the poor, has been revised downwards to 10.4%, from 13.7% previously, whilst growth in expenditure on basic education for the next three years has been revised upwards from 6.8% to 7.5%.

There has also been an increase in the growth allocated to peace and security, of which presumably the police force is most integral. However, these expenditure increases are now being counterbalanced by a significant reduction in the growth of funds allocated to economic development, from 7.4% per annum previously, to 6.5% currently. There has also been a slowdown in the funding of social protection, from 7.9% growth per annum, to 7.4% currently.

In conclusion, the budget speech certainly gave the impression that the government recognises what needs to be done in order to address the structural weaknesses of the economy which are holding back economic growth. Time and again one kept hearing about the need to fight corruption and state capture, the need to increase infrastructural investment and to devote more efforts to improving education or the imperative to sustain fiscal and monetary discipline.

However, there appears to be little concrete evidence yet of invoking some of the changes that are needed to uplift the sustainable growth rate of the economy. There was little mention of the need to promote small business activity and reduce the concentration of power in business.

In summary, #MTBPS2018. ‘We are borrowing more to pay SAA & other SOE. We shall do the things we should have done, but frankly we have run out of money. Growth is low, things are more expensive’ Tito We now need urgent reform. Sell SOE’s, invest in cities, Pay SMME’s on time.

Whilst there was commentary about how the government intends reconfiguring state-owned enterprises so that they operate more effectively, there was little detail in this regard. Disappointingly, although not surprisingly, there was little obvious mention of any desire to embark upon even partial privatisation which could theoretically assist in assuring greater accountability and efficiency within SOEs.

Most disappointingly, of all things, however, was the relative absence of any determination to improve the country’s fiscal metrics in such a way as to provide longer term scope for rectifying the structural imbalances in the economy. The blame for this cannot be laid on Mboweni. The delivery of his speech was full of character, but it is doubtful whether the content was influenced much by him. Instead, it appears as if the basic tenets of the MTBPS were already clearly outlined by the time he was appointed as Minister of Finance.

One can only hope that over the next few years his strength of character might encourage the government to invoke some of the less popular measures that might be needed to ensure that the economy becomes more investor friendly and manages to attain greater efficiency and higher economic growth. As things stand now, there is little in the MTBPS to make one believe that South Africa will become more productive to be able to manufacture more of the goods that it needs so as to become less reliant on foreign investment, technology and know-how.