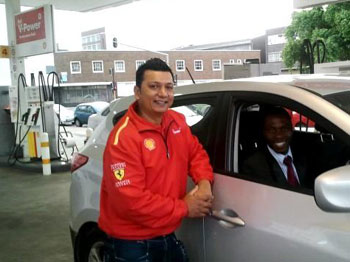 Entrepreneurship lessons: An example of how starting early, self-discipline works

An inspiring story of a young Durbanite that provides key lessons in entrepreneurship for everyone. Rikesh Parthab’s passion for business was nurtured early on, encouraging him to make the sacrifices that created a springboard for today’s sizeable operation. I’ve got the feeling we’ll be hearing a lot more about this young man.

Published with the permission of Business Partners:

Teachers know that it is very difficult to predict who in any ordinary class of school children are going to become outstanding entrepreneurs one day – not necessarily the top performers, not even necessarily the guy who is always flogging chips and sweets to his schoolmates. But in hindsight, they usually recognise that the signs were there all along.

In the case of Rikesh Parthab, the signs were in his choice to sweat away his weekends in the KwaZulu-Natal (KZN) heat as a 16-year-old petrol pump attendant while his classmates passed by, towel around the shoulders, on their way to the local municipal swimming pool. Today, he owns, among other things, the number-one Shell petrol station in KZN, one of the top ten in South Africa and one of the top 300 out of 14 000 Shell outlets in the world.

On the face of it, Rikesh’s career makes him seem like a reluctant entrepreneur – he studied electrical engineering and worked for Telkom as a technician for nine years and a trainer and lecturer for seven more before he stepped out on his own.

But his entrepreneurial bent was always with him. It was there at the sweltering petrol pump in his youth when he decided that he would one day own a petrol station, it was part of his “life plan” which he drew up for himself aged 19. It was what drove him to start a gate-automation service as a sideline while working for Telkom. He even started a hair salon as a sideline and sold it after two years. He learned great business lessons with those two exercises, he says.

Even when he was working for one of the biggest corporates in South Africa Rikesh was following an entrepreneurial lifestyle – thinking and planning ahead, testing the waters, looking out for opportunities, learning as much as he can, absorbing skills and ideas, and above all, living frugally.

Business owners who start out on their own are forced to live frugally. A growing business absorbs so much money that there is little to spare for luxuries in the early years. Probably the biggest sign that Rikesh is a natural entrepreneur is that he was able to live sparingly even though he wasn’t forced to by the circumstance of owning a young business. He resisted the trappings of corporate life and kept his mind and budget on the aim of starting a business. Beginning at the age of 19, he bought five-year investment policies. Every time he got a raise, he and his family “tried to live without it”, saving it rather for the day he would step out.

“For me, working as an employee was always just a means to an end,” he says. Like his father, who also left employment to build his own construction business, he wanted to be in charge of his own destiny.

The trigger came when Telkom was downsizing, and he had saved up enough to buy a petrol station without being crippled by personal debt. Business Partners financed the acquisition of the petrol station in a flexible deal in which they took 30% equity in the garage. In February next year, Rikesh will have bought back the last of the equity, becoming the full owner of a debt-free service station.

Because of his thrifty habits, Rikesh’s lifestyle as a business owner did not differ that much compared to his corporate life – except, of course, the long hours that he had to put in to get to know every aspect of the business. Rikesh reckons the owner of a new business has about six months to get to know a business inside out; otherwise the project may not survive.

This means having to take a hands-on role in every function in the business in the first few months. Only after that can the business owner start taking a step back through setting up systems that run on their own. This is a painstaking, incremental process which Rikesh calls “settling the business.”

Only after a number of years was Rikesh able to start spending more time with his family – and it still requires a concerted effort. “It is a difficult journey, which you constantly have to strive for,” he says.

But he finds he is getting better at it. With his recent acquisition of a second service station, again financed by Business Partners, he found that turning the new outlet around took only a fraction of the effort that went into his first garage because he had practiced the model already.

Hearing Rikesh describe the takeover process reveals more interesting insights into his entrepreneurial thinking. The first thing he did at the new garage was to start working on the mindset of the staff he took over. Every petrol pump attendant had to start believing that he was also a salesman, and the office staff that they had to run out into the forecourt to help a waiting car if all the pump workers were busy. Rikesh says he has learned that business is about working with people first, then only with machines and systems.

Another aspect of entrepreneurship that Rikesh clearly gets right is his constant prioritisation of the basics. Business owners can very easily get distracted by all sorts of add-ons to their businesses that aren’t really important, like having a bells-and-whistles website as opposed to just making sure that the phone is answered properly. Rikesh believes that by concentrating on getting the basics right will already set your business ahead of 90% of your competition.

Rikesh says the process of stepping back from the day-to-day operations is good for business. It allows him to strategise, it gives staff an opportunity to learn to think for themselves and turns the business into a robust entity.

The time away from the business is also good for Rikesh personally. It allows him to explore new opportunities – this time in hydroponics and urban farming – like the natural entrepreneur he has always been.