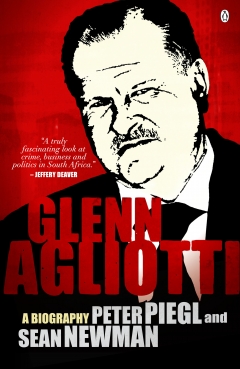 Like anything that’s hidden, many rational beings are fascinated by the economics of crime. But even when the objective is to learn, the truth can be hard to digest. Especially when perpetrators walk free. As is the case with the subject of the latest book on the subject, crime boss Glenn Agliotti.

“Why do drug dealers still live with their Moms?” was my favourite chapter in the Levitt/Dubner masterpiece Freakonomics. And the superb Illicit by Moises Naim provided the chilling discovery that my homeland is a nexus for global crime networks. But the Agliotti biography by Peter Piegl and Sean Newman turned my stomach. Because it hits closer to home.

The authors write well. Especially in the early chapters describing their subject’s childhood and early career. But the book gets bogged down by the sheer volume of the drug deals, smuggling, corruption and general criminality. After a while the crimes, and how the criminals rip off each other on “professional fees”, becomes almost boring. Perhaps because the crimes appear victimless. Unremarkable almost. Until you are hit with names of people you know. And in some cases, know very well.

In the key part of the book Agliotti is portrayed as a bit player, an observer of what his pals were doing. The late Brett Kebble is portrayed as a far more sinister figure. I met Kebble many times. He was always witty and charming, but also a terrible gossip. That, thankfully, set off my alarm bells. People who talk freely about faults of others usually do the same thing behind your back. And they rarely let the facts obstruct their juicy stories.

Among the ideas Kebble entertained was to launch a competitor to Martin Welz’s investigative magazine Noseweek. He’d offered a colleague vast riches to become its editor. And if he wasn’t up for the job, Kebble asked, how about a “no string attached” monthly consultancy fee for the occasional chat? Kebble must have been convincing enough for this otherwise hard-nosed journalist to seek counsel. Those ringing alarm bells became invaluable. He turned down the crooked miner. Others, some still very much at large in the media space, did not.

Kebble’s publishing ambitions were fuelled by his hatred for Welz. The fiercely independent editor and publisher never shirked from hurling thunderbolts at the corpulent financier. Like the rest of us, Welz also heard the whispers. What made him different was he actually published. Only in this book does one realize how deep Kebble’s resentment ran. As the book reveals, the resentment was so deep that Kebble put the editor onto a five-person “hit list”. People he wanted assassinated. People I know well.

The only “hit” actually carried out was on Stephen Mildenhall, a mild mannered chartered accountant whose genius had seen him rise to Chief Investment Officer of Allan Gray, the country’s best performing asset manager.

Here’s where it gets personal.

For some years Stephen was my regular radio guest on Wednesday evenings. He was a judge in our annual Corporate Governance Awards sponsored by his alumni Deloitte. Allan Gray was also an investor in my company (Moneyweb) so I’d visit him twice a year to update his team on the financial results. We knew each other well.

On 31 August 2005, Stephen waited in his office until our interview had finished around 6:30pm. He was probably still listening to the show – as he used to do – when he arrived home. Then, after getting out his car, was shot three times in his garage by men paid R1m by Kebble to “decommission” him.

In the days after Mildenhall’s shooting, our questions brought up suggestions that it was a “hit” and probably related to Stephen’s public resistance to Kebble’s plans. Allan Gray was a bit shareholder in the companies run by Kebble. I passed on our suspicions on to money manager. But despite the shooters’ guns having had silencers, Allan Gray’s team told me its investigators concluded was a random event. A few months after recovering from his wounds, Mildenhall and his family emigrated to the UK.

The book tells us combative CEO of Durban Deep, Mark Wellesley-Wood, was another on the Kebble hit list. So was then Aflease FD Jean Nortier. Both had been regular visitors to our radio studios. The fifth one for “decommissioning” was Mark Bristow, CEO of Randgold Resources. A rival during our schoolboy cricket years (he with Estcourt, me Newcastle) and, later, captain of our side at university. It rarely gets more personal than that.

By comparison, the rest of the book left me feeling dirty. A reminder that our young democracy has a way to go. That there is much to address in the criminal justice system when a brazen, boastful gangster like Agliotti can still hold court at the Brazilian Coffee Shop in Sandton.

Some journalists have called on their peers to ignore the book. Perhaps hoping by denying it publicity they will deprive Agliotti from enjoying his narcissistic obsession. I disagree. With such an extensive list of crimes so well documented, Agliotti is challenging the authorities to come and get him. The Chicago Cops got Al Capone with much less.

* Glenn Agliotti, A Biography by Peter Piegl and Sean Newman is published by Penguin and retails at R220.