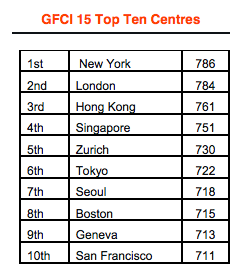 After seven years as the world’s leading financial centre, London has been usurped by New York. But for locals the good news is that Johannesburg has jumped 11 places on the global league to rise from the 61st place and is comfortably the highest placed African city with Casablanca the only other one rating a mention. The full table, compiled from a survey by Michael Mainelli’s UK-based consultancy Z/Yen, is carried below the Reuters article. – AH

LONDON, March 15 (Reuters) – New York has knocked London from its position as the world’s leading global financial centre after seven years, according to the Global Financial Centres Index compiled by London-based consultancy Z/Yen.

London slipped from the top of the global rankings, scoring 784 against 786 for New York, because a series of own goals had tarnished its reputation, the report said.

“London sees the largest fall in the top 50 centres,” said Mark Yeandle, report author and associate director of Z/Yen, in a statement on the group’s website.

“This seems to be based on a number of factors including … uncertainty over Europe, the perception that Londonmight be becoming less welcoming to foreigners and perceived levels of market manipulation.”

Hong Kong and Singapore took third and fourth spots respectively, the same as a year ago, the survey showed.

But the gap between the “Big Four” and the chasing pack, led by Zurich, Tokyo and Seoul, was narrowing, it said.

Middle East centres, such as Qatar, Dubai and Riyadh, which took places 26, 29 and 31 respectively, continued to rise in the index, while 23 of the 27 European centres declined in rank.

TheCityUK, a lobby group for British financial and professional services, said London slipping from the top spot should be a wake-up call for Europe’s policymakers.

“London is Europe’s financial centre and is hugely important to the continent’s ability to finance growth and create jobs by attracting global investors,” said Chris Cummings, chief executive of TheCityUK. 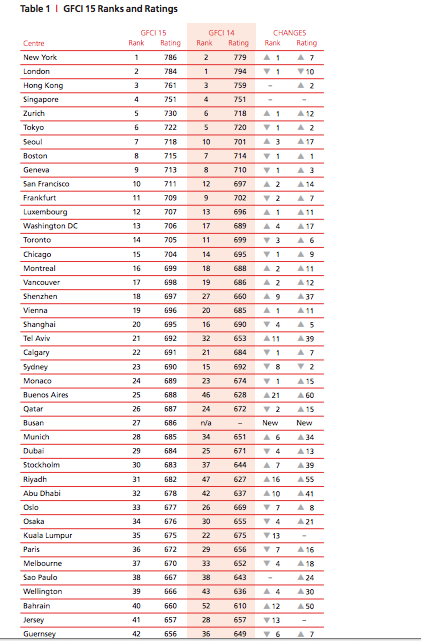 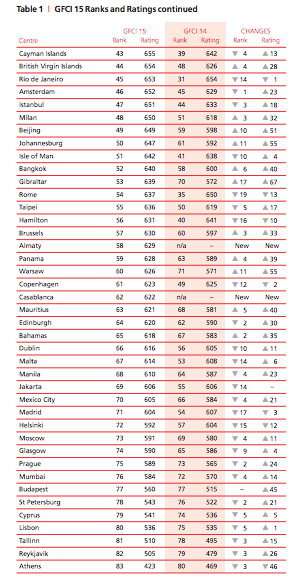