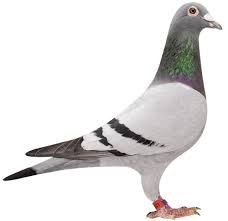 The “sport” of racing pigeons has a strong following around the world. But with few exceptions (Absa’s founding CEO Piet Badenhorst among them) in most parts of the world it is a decidedly middle-class past-time – the poor man’s horse racing if you like. Like so much else, that’s not the case in China. In the Middle Kingdom, bird racing has attracted the attention of rich entrepreneurs, one of whom paid $320 000 to buy back his own bird at an auction this week. That lofty bid was still some way short of the record $400 000 paid last year by a Chinese businessman for the Belgian racing pigeon champion called Bolt. Not quite Holland’s Tulip Bulb Mania, nor even South Africa’s still expanding Buffalo Bubble. But not too far off. – AH

By Tom HANCOCK of Agence France-Presse:

As the price flew skywards, an audience of middle-aged Chinese men erupted into cheers before the auctioneer slammed his hammer down at a record-breaking two million yuan — $320,000.

The object of the frenzied bidding — a grey and white racing pigeon — responded with a gentle cooing, its beady red eye scanning the smoke-filled auction room.

Drawing on an age-old tradition, racing birds have become a plaything for rich entrepreneurs in China.

“Two decades ago, 400,000 (yuan) was considered a sky-high price. Prices are going up around 10 percent every year,” declared Zhou Zhuanhong, who presided over the auction in Beijing last month with booming tones.

But the sale was not entirely what it seemed. The buyer — pharmaceutical baron Guo Weicheng — was bidding for his own bird, even though he had to pay the club holding the auction a 40 percent commission.

Nonetheless dozens of deals including several worth over $100,000 were genuine transactions, according to those watching the sale, where high-rollers with chain-smoking entourages tucked birds in cardboard boxes under their dining tables.

“The prices here are like nowhere else,” said Ulrik Lejre Larsen, a Danish breeder who is one of many Europeans profiting from pigeon enthusiasts in China. “It’s crazy,” said another foreign breeder at his side.

Racing pigeons have a sense of direction that science cannot fully explain but allows them to find their way home over hundreds of kilometres, and have been raised in China for more than 1,000 years, often used as military messengers.

But in a sign of increasing scrutiny of the trade by Chinese authorities, the bird was held up at customs and Gao handed a 10 percent tax bill.

Bolt was freed after the Belgian embassy intervened, industry insiders told AFP, and is now said to have retired to stud in Beijing. Gao declined an interview request.

China has hundreds of pigeon associations, and working-class breeders in Beijing still send their birds into the sky with whistles attached, sounding a high-pitched whine as they fly over winding alleys.

But the last decade has seen a takeoff of luxury clubs and racing leagues for a new breed of big-spending enthusiasts — and allegations of illegal betting on races.

The Pioneer Club in Beijing’s western suburbs is among the most exclusive. Its clubhouse is adorned with classical Greek columns and on event days its carefully manicured lawns are surrounded by Mercedes and Audis.

The creatures themselves are kept in heated houses where full-time attendants calibrate every aspect of their diet and lifestyle to produce maximum speed. They are taken out on regular test runs — which can be a hazard in polluted Beijing.

“When they hit the smog, its like a wall. Some of them will get lost,” said Stuart Chu, a Taiwanese breeder who has lost several pricey birds in the murky air.

Top-end owners are “usually people who raised pigeons in their youth, and now they have achieved success in their careers they want to do it again”, said Su Quanlin, the Pioneer club’s founder.

His clients are willing to pay such high prices for the birds “because they want honour. It gives them face,” he added.

Others suggest more impure motives for the trade. Around a dozen industry insiders — who all asked to remain anonymous because gambling is illegal in mainland China — told AFP that betting on races was widespread.

“A pigeon race is perfect for gambling. Because you can never predict who will win,” said Lars Vercammen, a 25-year-old breeder from Belgium.

Twice a year the club holds an “Iron Eagle” series of four races with hefty entry fees and total prize money equivalent to more than $2.4 million.

A day before each contest, hundreds of feathered competitors were loaded into cages and driven 500 kilometres away from Beijing, green identification rings around their scaly red ankles.

Six hours after their release, a tense silence hung over the club’s lawn, broken only by owners and trainers munching on peanuts as they waited for their pigeons to return.

Suddenly the first grey bird dropped out of the sky and on to its loft, the winning time flashing onto an electronic display board.

Overall victory in the series went to a pigeon known only as 04010, owned by pharmaceutical entrepreneur Guo, whose wealth is estimated at $1.3 billion by Forbes magazine.

A month later the top  birds were compulsorily auctioned off under the “Iron Eagle” competition rules, with loudspeakers blasting the theme from ‘Star Wars’ to herald each high-priced sale, and buyers indifferent to the edicts of an official austerity campaign.

Guo — who cuts a distinctive figure with a shaven head and black and white suit — repeatedly raised a paddle to ensure he kept his pigeon, despite the punishingly expensive commission.

“It’s about face. I’m crazy. I haven’t made any money,” he said, before a chauffeur ushered him into a grey Rolls-Royce.