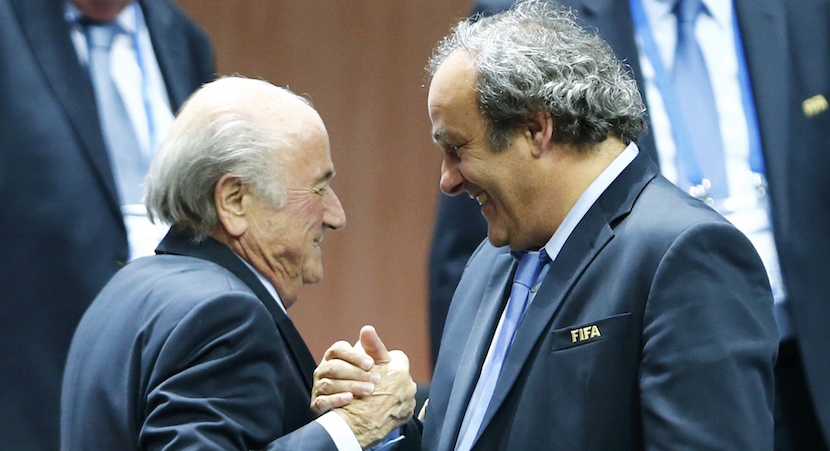 Blatter was unable to demonstrate any “legal basis” for the payment in 2011, while Platini’s assertion of an oral agreement was rejected, the adjudicatory chamber of FIFA’s Ethics Committee said Monday in an e-mailed statement. Blatter was fined 50,000 francs and Platini 80,000 francs and the bans take effect immediately.

The actions of neither Blatter nor Platini showed a “commitment to an ethical attitude, failing to respect all applicable laws and regulations,” the chamber said in its ruling. Both men demonstrated an “abusive execution” of their respective roles, it said.

Blatter, who oversaw FIFA for 17 years, and UEFA President Platini were suspended from all soccer activities Oct. 8 after Swiss prosecutors opened an investigation into the payment. The move essentially ended Blatter’s presidency and delivered a blow to Platini’s chances in Feb. 26 elections for FIFA president. Platini was handed another setback Dec. 11 when the Court of Arbitration for Sport rejected the appeal of his 90-day suspension, saying it saw no need to overturn it.

Blatter and Platini have denied any wrongdoing, saying Blatter was fulfilling an oral contract between the two for services the Frenchman provided to FIFA between 1998 and 2002. The final payment on the contract was made in 2011.

Blatter plans to appeal the decision to the Lausanne, Switzerland-based Court of Arbitration for Sport, his spokesman Klaus Stoehlker said on Monday in Zurich, before a press conference that the formerFIFA president has scheduled for 11 a.m.

A lawyer and spokesman for Platini did not immediately return calls seeking comment.

The French weekly Journal Du Dimanche reported in a Dec. 6 issue that it had documents that showed FIFA and UEFA officials knew about the contract. Thibaud D’Ales, Platini’s lawyer, said that supported Platini’s contention that he had done nothing wrong or had been trying to hide the agreement. The newspaper report “is the written proof of the oral contract between Michel Platini andFIFA, as well as the amount and it also confirms that the contract was no secret because it was known about by executives at UEFA and FIFA,” D’Ales said at the time.

FIFA’s problems began with the arrest of seven soccer officials in Zurich in May, part of the U.S. Department of Justice’s indictment of 14 people for bribery, racketeering and money laundering. Two FIFA vice presidents were arrested in Zurich on Dec. 3 as U.S. and Swiss prosecutors widened their investigations into corruption in the sport and more specifically, allegations of bribery in the selection of Russia and Qatar to host the 2018 and 2022 World Cups.

The most interesting piece of information out of all of this mess is that #FIFA have an "ethics committee". #SeppBlatter

FIFA will hold elections in Zurich on February 26 to choose its next president. Issa Hayatou, who became acting president of FIFA with Blatter’s suspension, said in a Dec. 18 open letter that the election is the chance “to start a new chapter” following a “crisis that has shaken football governance to its core.”