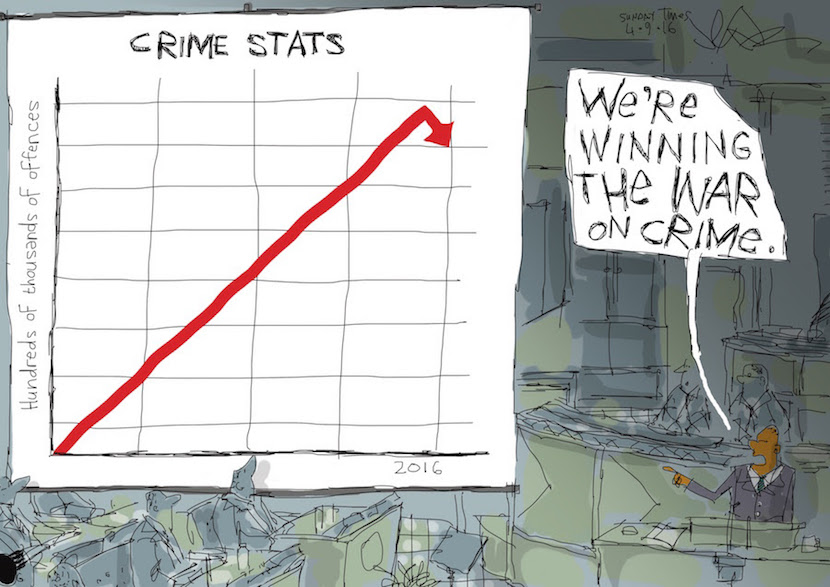 While economic growth stagnates and the one percent get richer, the one telling stat that is following their lead is crime. The latest South Africa crime statistics point to increases across the board. From murder to rape, the country is being held hostage by these criminals who are usually repeat offenders. The Institute of Race Relations’ Phumlani UMajozi, who himself has been a victim of crime, says it’s time the authorities got tough on criminals. While you may not agree with his ideas, what do you think should be done about crime in South Africa? – Stuart Lowman

The shocking crime statistics released by the Minister of Police, Nathi Nhleko, and Acting Police Commissioner Khomotso Phahlane last week, was a reminder that criminality remains a serious problem in this country. Murder went up by 4.9% over the past year, attempted murder went up by 3%, house robberies went up by 2.7%, and car hijackings went up by 14.3%. 114 people are raped every single day – a figure some experts believe is too low.

To learn that we are in such a state of criminality is very scary. We are in a crisis that needs urgent attention; not only from government, but also from we the citizens. That 51 people are murdered each day is something that ought to get us off our seats and act bold.

These statistics reminded me that I have been a victim of crime numerous times since I came to Johannesburg in 2012. The most terrifying incident was the one that took place in Roodepoort, last November; where two armed men stormed into our house, assaulted us, robbed us of laptops, cellphones and wallets. Luckily none of us were killed during the incident. It was Banele Sindane, former CEO of Athletics South Africa who, four days later, was shot to death in a similar incident in his house in Ruimsig, not far away from where we stayed.

Read also: Crime surge continues – In SA 6 times more likely to be murdered than in US

It’s hard to understand the reasons behind South Africa’s violent crime. But whatever the theories out there, one thing is clear: we have to be tough on the fight against crime, very tough. We can’t afford to be lenient to vicious criminals when people lose their lives every day. The cost is too high.

Many of these heartless criminals are people who have committed crimes before and were released from prison. Minister Nhleko said 30% of perpetrators arrested for murder had already spent time in jail for other crimes ranging from armed robbery to assault.

People commit serious crimes and we don’t punish them. We release them from prison and try to reintegrate them back into communities. I have no idea why a person who took another human life should be reintegrated back into the community. Disturbing, yet those on the seats of power continue with this frustrating practice of leniency to criminals.

The above also applies to ordinary citizens. If you are lucky enough to own a legal pistol, use it to defend yourself, your family, and your property from violent thugs. Shoot to kill when criminals break into your home. If you don’t have a legal pistol, I suggest you buy one. Because the police won’t be there when those armed men, who will be ready to kill and will probably kill you, break through your door. They won’t be there; they’ll come an hour later when criminals are long gone.

Of course the privileged, those who drive nice cars, and sit in air-conditioned offices, with bodyguards, will criticize this approach. They are in the media, politics and academia. They are the same people who strongly criticized Mr. Bheki Cele when he took violent criminals head on. That’s how out of touch with reality they are.

With the great history and huge potential this country has, crime remains one of the greatest challenges the nation battles with. And it’s not just crime; it’s violent, deadly crime. These shocking statistics released by Minister Nhleko are evidence.

Our image is being tarnished. We cannot afford to delay things. Let’s be tough on crime. Because if we are not, the future is bleak as lives are being lost every single day.