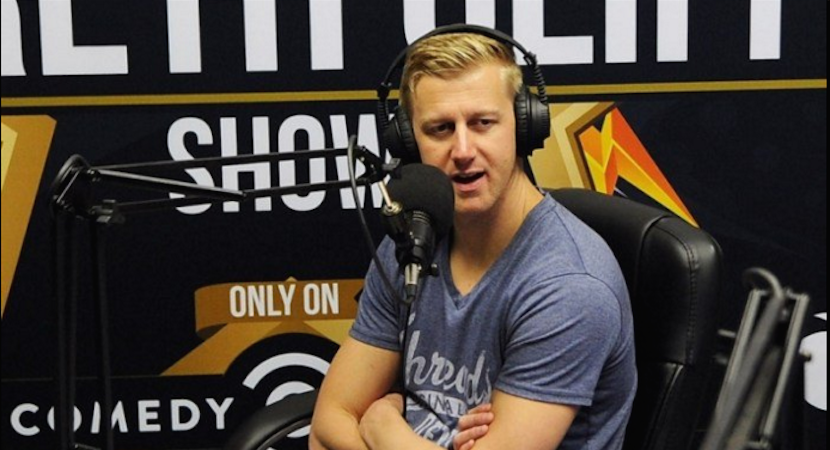 Shock jock and media entrepreneur Gareth Cliff is used to controversy and regularly turns a blind eye to comments about him that are just plain wrong. When he accepted a freedom of speech award recently, Cliff said: “If I call you names, as I have been called in the last few days on Twitter – horrible things that I most certainly am not, you have to suck it up, like I do.” But a report in the Sunday Times that paints him as someone who would deliberately spike someone’s drink is a step too far for him. Cliff has put his lawyers onto the newspaper, accusing them of twisting the facts to suit their own purposes. He is particularly annoyed about the headline. The story that was published emanates from comments in his new book, Cliffhanger, and is threatening its sales, as some in the social media have called to boycott the publication following the Sunday Times article. In April, the Sunday Times announced it was embarking on a significant restructuring to improve editorial quality after it published a number of false articles about the South African Revenue Service. Its plans included bringing in some of South Africa’s best investigative journalists. You can read the details of the media company’s strategy below, as well as the lawyer’s letter Cliff sent to the Sunday Times. Looking at the letter from Cliff’s lawyers, the Sunday Times still has some way to completing its improvements in the newsroom. – Jackie Cameron

The Sunday Times, which is celebrating 110 years of existence this year, is known for its excellent recording of our country’s complex history.

We have not only exposed South Africa’s dark side, but we have led in celebrating its beauty and excellence.

When I took over as editor at the beginning of the year, I made a promise to continue the paper’s long tradition of accounting and service to readers with ethical and professional aplomb.

This is the reason I am writing today, as part of my commitment to account to you on some of our major stories. Our investigation into the South African Revenue Service, which defined our coverage for most of last year, is one such story.

‘Rogue’ unit never broke the law and was very effective

Two years ago we started looking into claims that SARS was running an unlawful, covert intelligence unit. We were told that it had been illegally set up, had been spying on prominent taxpayers or offenders, and had bugged the offices of state institutions and taxpayers.

It was not until six months later that we published the first of more than 30 stories about the unit and its activities.

The integrity of SARS is a matter of obvious and unassailable public interest. Allegations of the existence of a “rogue unit”, operating contrary to its legal mandate, would be a scandal in any country.

No newspaper of integrity would look the other way when such allegations and claims are made. When investigating, however, we are expected to ascertain the facts and afford the affected parties a fair and reasonable right of reply. It was our reporting of this story – as well as on the Gupta family’s undue influence in public life – that has lifted the veil on at least some of the reasons behind the hostility between President Jacob Zuma and former SARS commissioner and now Finance Minister Pravin Gordhan.

The team of reporters who worked on the SARS investigation have a long track record of exposing wrongdoing in high places. They have an exemplary record as investigative journalists who have won numerous prestigious local and international awards. Notwithstanding this, no one is infallible. Did we get everything right with our SARS story? No. Did we get everything wrong? Again the answer is no.

Today we admit to you that we got some things wrong.

It is clear that SARS received approval to set up the National Research Group within the National Intelligence Agency from then finance minister Trevor Manuel. The unit was not in the end set up within the NIA but became a unit within SARS.

In particular, we stated some allegations as fact, and gave incomplete information in some cases. In trying to inform you about SARS, we should have provided you with all the dimensions of the story and not overly relied on our sources. Granted, it is our responsibility to build, sustain and protect a relationship with our sources, but we should have allowed you to make your own judgment based on all sides of the story.

The ‘rogue unit’ narrative was a great disservice to public interest, and made up of lies and distortions

In a front-page story headlined “SARS bugged Zuma”, published on October 12 2014, we stated that a former SARS official, known as Skollie, blackmailed SARS into paying him R3-million to keep quiet about how members of the unit broke into Zuma’s house and planted listening devices. The story and headline stated as fact that members of the unit broke into Zuma’s home and planted listening devices there. It should have been made clear, both in the headline and in the story, that this was an allegation, not a fact. The allegation was also not properly attributed.

Our sources did not give us an exact date, although they were adamant the bugging was done by the unit. One source with direct knowledge said it was some time after Zuma was acquitted of rape (in May 2006) and before the ANC’s Polokwane conference when he was elected ANC president (in December 2007). The story could have given readers the impression that this could have been around 2005 or 2006, whereas the SARS unit, according to documents in our possession at the time of writing, made it clear that the unit was set up only in February 2007.

Former SARS deputy commissioner Ivan Pillay, in his right of reply, which we publish today, claims we refused to publish a statement by a former SARS official denying he ever told us he was bribed to leave SARS and stay silent about an alleged bugging of Zuma’s home. It is true that the official sent an e-mail to our reporter denying ever making the claim. This is the e-mail that he then sent to SARS. But Pillay is not aware that the official later sent us another e-mail confirming our off-the-record interaction.

In another front-page lead, “Taxman’s rogue unit ran brothel”, on November 9 2014, we again wrongly stated as fact in the headline and in some parts of the story that the unit had set up its own brothel. In fact, this was an allegation from a former member of the unit. The member had claimed that one of his colleagues had set up a brothel. This was not strong enough to report the allegation as fact.

In another article in the same edition, we reported incorrectly that Johann van Loggerenberg had written a “confession” letter to SARS commissioner Tom Moyane admitting that he had indeed run a “rogue unit”. The document contains no such confession. It was, in fact, a denial.

More errors were repeated in other reports, such as “the infiltration of politicians as bodyguards”, “breaking into homes and conducting house infiltrations”, “running front companies” with secret funds of over R500-million, and “spying on taxpayers and top cops”.

The SARS story has given us an opportunity to take a closer look at our news-gathering and production processes. We have found some serious gaps.

Efforts are being made to close those. Our news desk – made up of a team of section editors – is being restructured.

In strengthening our quality assurance and editorial testing processes regarding our major and front-page stories we have deployed one of our most senior editors to strengthen our news-editing process. We are also recruiting for an investigations editor to help manage all investigation projects – not just for the Sunday Times, but for The Times, Business Times and digital.

In the interim, Andrew Trench, an experienced and well-respected investigations and digital editor, will act as investigations editor. He brings with him vast experience both within and outside the Times Media Group – he is a former editor of the Daily Dispatch and now head of digital content.

This new structure will allow us to focus even more on investigations. However, we will do them differently – investing more time, money and other resources.

These changes are necessary and long overdue as the Sunday Times has become an important institution and a crucial part of this great nation of ours.

As our motto says, we are the paper for the people and this statement is what must forever define our value.