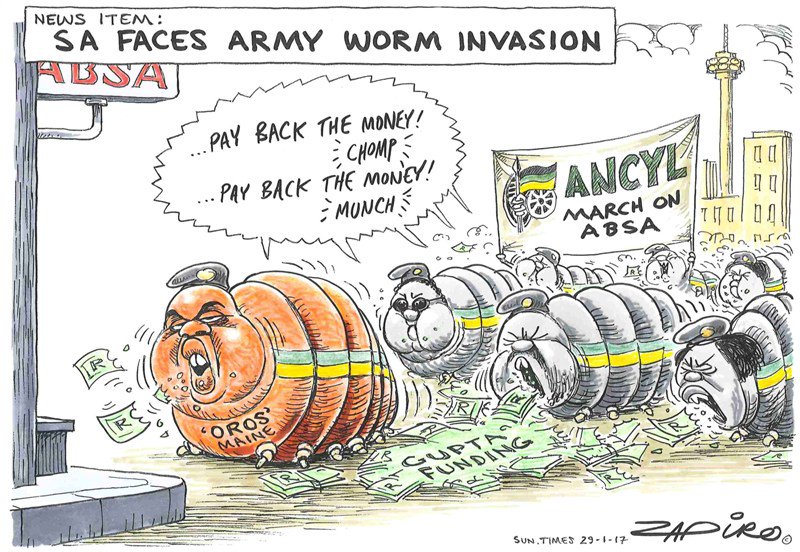 The white monopoly capital narrative being increasingly used by Zuma and his cohorts is downright dangerous in its potential for a racially-based nationalist onslaught which numerous frightening historical comparisons can be made. Donwald Pressly digs down into speeches made by influential ANC cadres just this year and shows how Msholozi is buying into the discourse being set by the more radical party youth. The likely outcome, which this story waves a large red flag on, is that in the not-too-distant future, Zimbabwe-style land invasions will increase and the ‘white monopoly capital” led by ‘’anti-Brics imperialists” will disinvest and move offshore. Anyone seen to be supporting farmers or big business is a puppet, and guilty of treason. Any historical political similes coming to mind? All attempts at rebutting or countering this racially-based discourse, which is increasingly gaining traction as the ANC gains greater media control, will merely go to prove the original theory correct. There’s no changing a firmly held world view – it’s like fundamentalist religion – all else is secondary. It’s the tar-baby syndrome; the more you engage, the stickier it gets. Ironic isn’t it how probably the ANC’s greatest enemy yet – the evil, gloating capitalist President Donald Trump – adopts identical tactics. – Chris Bateman

The term ‘white monopoly capital’ has crept into the narrative of our politics and is now poisoning the waters of public discourse. It pretty much excludes any economic activity by whites from the realms of legitimacy. One has to be wary of this becoming the idea fixe of the governing party because the ANC youth league have taken on the ideological slogans of the radical Left.

It is significant that former Economic Freedom Fighters’ Member of Parliament Andile Mngxitama – who was nogal kicked out of the opposition party along with four other MPs – addressed the ANC youth league last week. In fact he conducted a lecture on the evils and dangers of monopoly capitalists. State capture he said occurred when white settlers arrived in the country in 1652. Despite appearances the South African state was not ‘transformed’ by the 1994 ‘moment’ as he called it. It remained in the hands “of white capital”.

Delivering a lecture to the African National Congress Youth League at Zone 13 in Alexandra, Gauteng, on 2 February 2017, Mngxitama argued that there were two reasons why white capital led by the Oppenheimers, Johann Rupert and supported by opposition parties like the EFF and “London agents” like Cyril Ramaphosa and Pravin Gordhan want President Jacob Zuma gone. The first was the furtherance of the anti-Brics “Western imperialist agenda”. The countries which were part of Brics (Brazil, Russia, India, China and South Africa) had come under “imperialist onslaught”. They had removed the President of Brazil “through media manipulation and corruption”. She had been replaced by a “puppet”. The same regime change agenda was planned for execution in South Africa. He spells it out: “To this end the calls for regime change are part of the anti-Brics imperialist agenda.”

The second reason was because Zuma had threatened the interests of “white monopoly capital” in his promotion of black business in a key sector of the economy as well as the National Treasury by appointing a Minister of Finance (Des van Rooyen) in December 2015 “who was not captured by white capital”. The president had appointed a Minister of Finance “without first consulting white capital”. This had deeply concerned “white capital” which found his conduct to be “shockingly inappropriate”. The response of “white capital” was to attack the rand and compel Zuma to reverse his decision and appoint (reappoint) Pravin Gordhan instead.

Mngxitama believes that Gordhan is beholden to white capital. White capital wanted a new president in South Africa who would appoint “pro-white capital ministers”. Hence there was a campaign to remove the president.

The Black First Land First movement – which clearly is closely allied to the ANC Youth League – says there needs to be a radical minimum programme of demands including the “return of land”. Mngxitama does not mince his words: “To this end the best form of defence is attack…The ANC must use the nominal power it achieved in 1994 to deliver economic freedom now through giving (in to) the people’s demands”.

He goes on. White supremacy “has consistently created a layer between ourselves and it, so as to keep us busy fighting with our own people instead of directing the fight against the real enemy…we must go directly for the enemy.” Unless this was done “we will remain fragmented and landless”.

White land ‘must be identified and occupied’

In 2017, he said blacks must realise the year of “Taking Back the Land” without paying for it. To this end “white-owned, used, productive land must be identified and occupied”. Land occupations must involve a process of educating “our people” on a new way of life that serves their interests. 2017 was also the year of making Absa bank pay back R3.2 billion “which is a portion of the R26 billion” looted from the fiscus by the apartheid state. He praised mass actions taken by the ANC Youth League against Absa.

It is now quite clear that much of Mngxitama’s rhetoric has been absorbed by the ANC. In a statement ahead of the opening of parliament, the ANC said – on 5 February – it urged government to use the State of the Nation address of 2017 (on Thursday) to “give expression to the…urgent tasks of the movement being: Return the land to the people using constitutional means”. Mngxitama’s message hasn’t quite got through…but it clearly is having an impact.

In an address the ANC Youth League in December last year, President Zuma himself reported that he had learned about a campaign by a “foreign chamber” and “big business” calling on him to resign. Reported in the Mail & Guardian he said: “I will never on my own resign because if I do so, I would be surrendering to the monopoly capital.”

Journalist and commentator Justice Malala writes in Business Live that “the days of a fact-based debate in South Africa are over. A dirty propaganda war — where truth doesn’t matter, where reputations are routinely torn to shreds through innuendo — has been joined”.

He writes: “This dirty war is most obvious in social media where it is led by a group of faux Black Consciousness activists built around Mzwanele Jimmy Manyi and others. They use Twitter and other social media to champion the cause of the Gupta family, to deflect from whatever this family may be accused of and to paint anyone who has ever raised a voice against their capture of President Jacob Zuma as being a pawn of a bogus grouping called white monopoly capital.”

The battle lines have been drawn. Hate has a way of creeping in surreptitiously. There is a danger that this white monopoly capital narrative can spread in a campaign of hate against whites in general – any white person who owns land and runs a business from the land. For there it can spread to hatred of whites in general irrespective of their social station or political orientation.