Drama engulfed Media24’s Huffington Post South Africa over the weekend as the website published a fake opinion piece that sparked, as columnist Tom Eaton put it, a “new low for SA media“. The article – written by ‘Shelly Garland’, a ‘Master’s student in Philosophy’ – argued that white men should be deprived of the right to vote. The reason? Well, Garland asserted that white men are to blame for Brexit, the rise of Donald Trump and the ANC losing four metros last year. Apart from warning signs over the veracity of ‘facts’ in the piece as well as whether ‘Shelly Garland’ was, in fact, real, Huffington Post editor Verashni Pillay defended the article. After the author Shelly Garland was revealed as fake, HuffPo SA pulled the plug on Garland’s post and Media24 has subsequently promised an investigation. But in this below analysis by Jonathan Witt and Roman Cabanac, it is blatantly clear that HuffPo SA failed the fake news test by not verifying the author’s identity and even going against its own editorial policies. In an age where Bell Pottinger inspired terms such as ‘white monopoly capital‘ are in vogue, ‘Shelly Garland’ should be a lesson to local media houses to tighten up their checks and balances. – Gareth van Zyl

By Jonathan Witt and Roman Cabanac*

On Thursday, the 13th of April 2017, the Huffington Post South Africa published a piece by Shelley Garland, a Master’s student in philosophy. Ms Garland argued that the suffrage needs to be removed, claiming that votes of white men have created the “biggest blows to the progressive cause”. White men have apparently been responsible for Brexit, the election of Donald Trump and the ANC losing four key metros in the municipal elections of 2016. Various other obviously spurious claims about land ownership, capitalism, and the fallacious Oxfam wealth report were made without references or the requisite evidence. They were treated as truth without interrogation. Ms Garland concluded her piece with the solution to the problem: remove the franchise from white men to wrestle away their supposed control of the world from them.

Reaction to the piece was swift and brutal. As of Saturday evening, the piece has had over 55,000 shares on Facebook. Sipho Hlongwane, the Blogs Editor at Huffington Post SA, even boasted about the amount of traffic the blog had received: 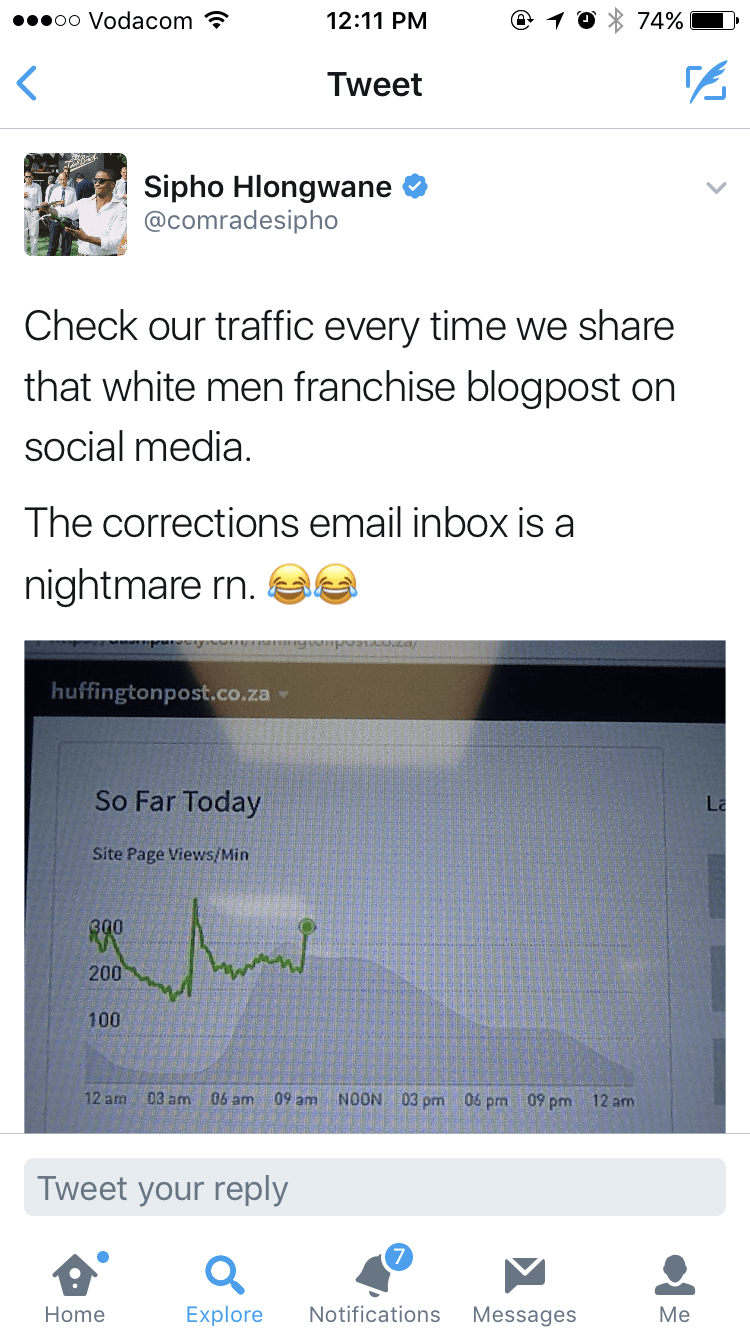 Twitter user @PrisonPlanet, who has over half a million followers, found the piece and tweeted the following:

“Progressive” racism is a cancer and it’s getting worse. http://www.informationliberation.com/?id=56592

The Huffington Post South Africa has a brilliant new progressive plan to solve all of Africa’s problems: deny white men the right to vote, then vote to steal their assets.

This was subsequently tweeted by @RubinReport, host of the popular Rubin Report show.

HuffPo writer argues white men shouldn’t be allowed to vote and liberalism is bad. Every word of this is nonsense: http://m.huffingtonpost.co.za/shelley-garland/could-it-be-time-to-deny-white-men-the-franchise_a_22036640/?utm_hp_ref=za-homepage …

Could It Be Time To Deny White Men The Franchise?

This redistribution of the world’s wealth is long overdue, and it is not just South Africa where white males own a disproportionate amount of wealth.

The blog was mentioned on the Washington Free Beacon, the Libertarian Republic and Fox News. It was the gold standard of virality, a triumph of the click-bait phenomenon, and likely a resounding commercial success for the Huffington Post.

Once the piece went viral HuffPostSA editor, Ms Verashni Pillay, penned a response vigorously defending the publishing thereof. She lamented the “patriarchal systems” which have allowed white men to wield power and further blamed readers for not understanding the “pretty standard feminist theory” that Shelley was peddling. The defence was subsequently deleted. 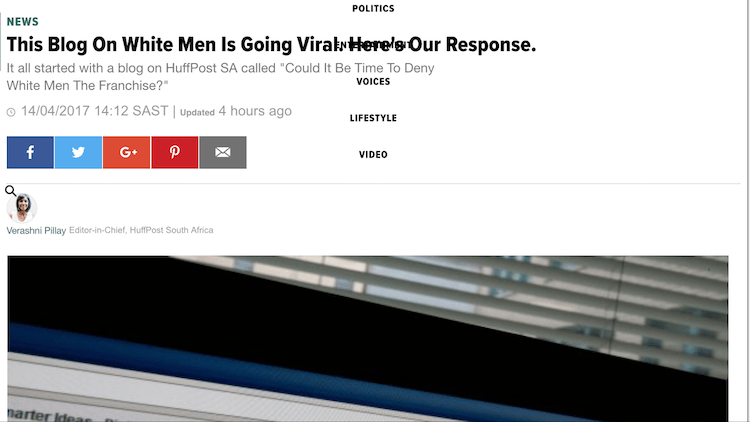 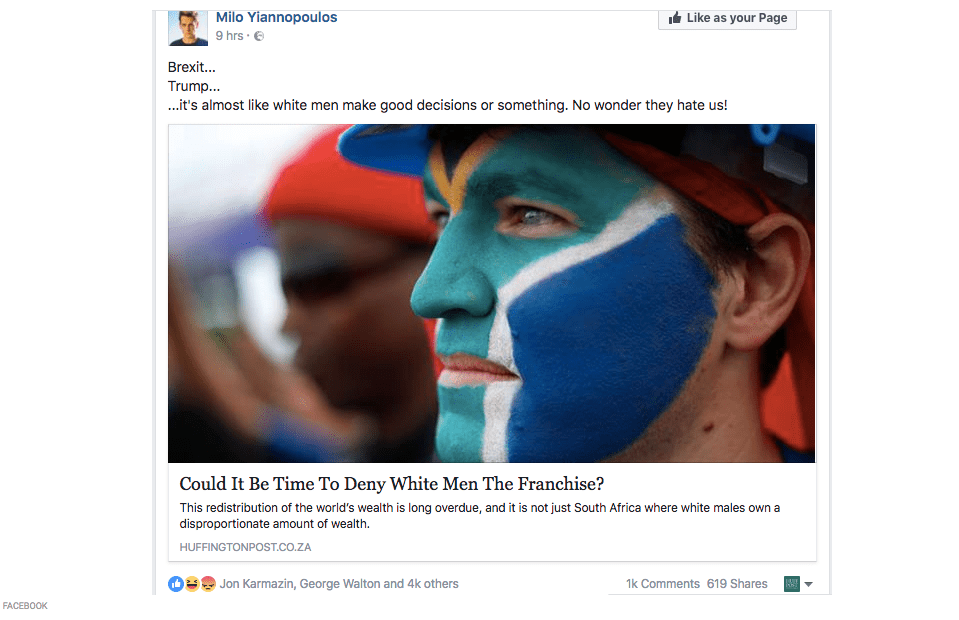 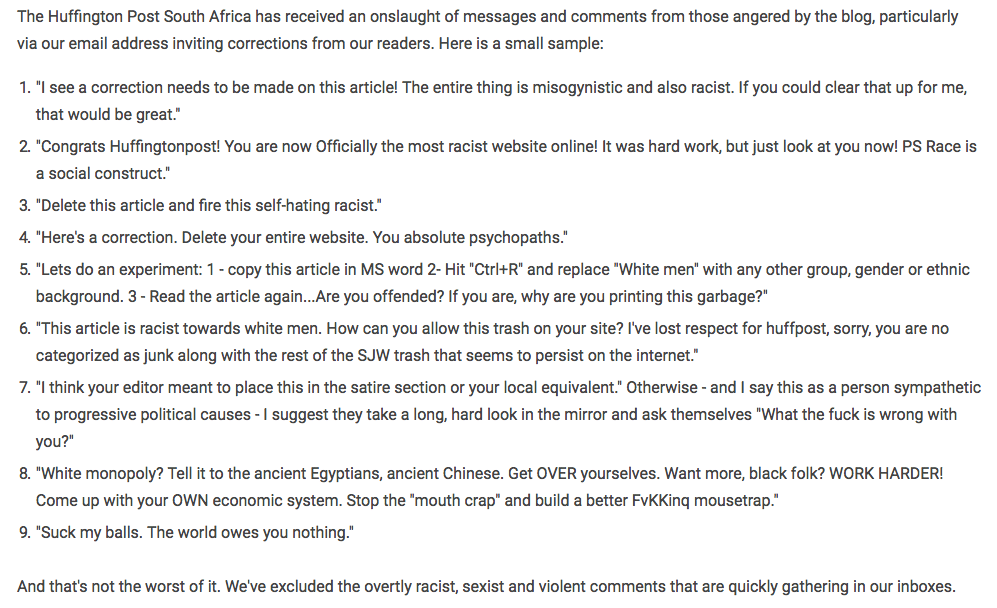 After the crowing and the ad revenue, the response suddenly changed tone. No explanation was given for the more subdued, edited defence of the blog.

On Saturday evening, there was a dramatic u-turn when the blog was suddenly taken down and replaced by a shallow apology. Ms Pillay offered a half-hearted mea culpa with a promise to bolster future blog contributions. She further announced that the matter will be relayed to the Press Ombudsman for review. The reason given for taking the blog down was that the Huffington Post could not verify the identity of “Shelley Garland”, and not because of its reprehensible content.

It appears that Shelley Garland does not exist. A Facebook search reveals very little. One would assume a MA student in philosophy would have some of her work in the public domain. A reverse image search of her picture only finds hits on topics related to her blog. She is an apparition.

However, “Shelley Garland” reached out to us, and sent us her original email to Huffington Post as well as their response (We have deleted the name of the intern who responded to “Shelley” as that is not of material importance). 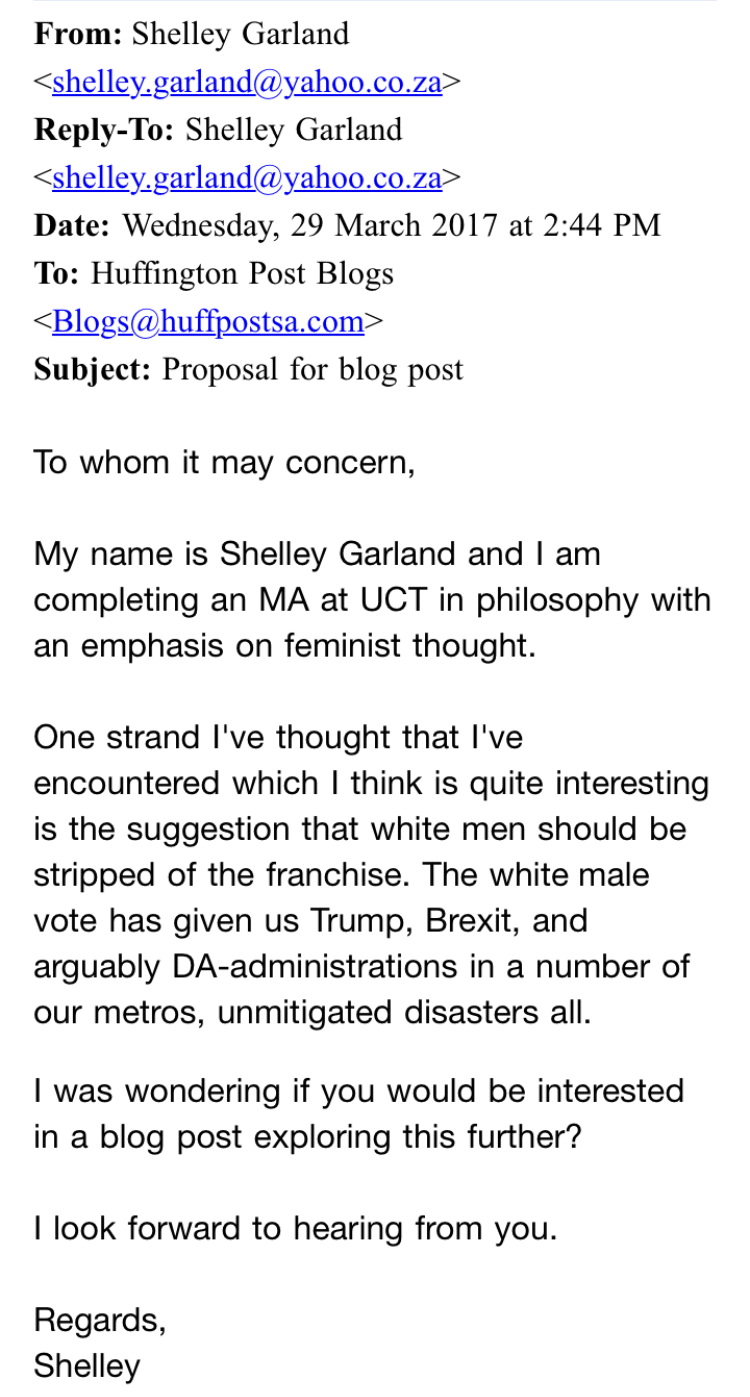 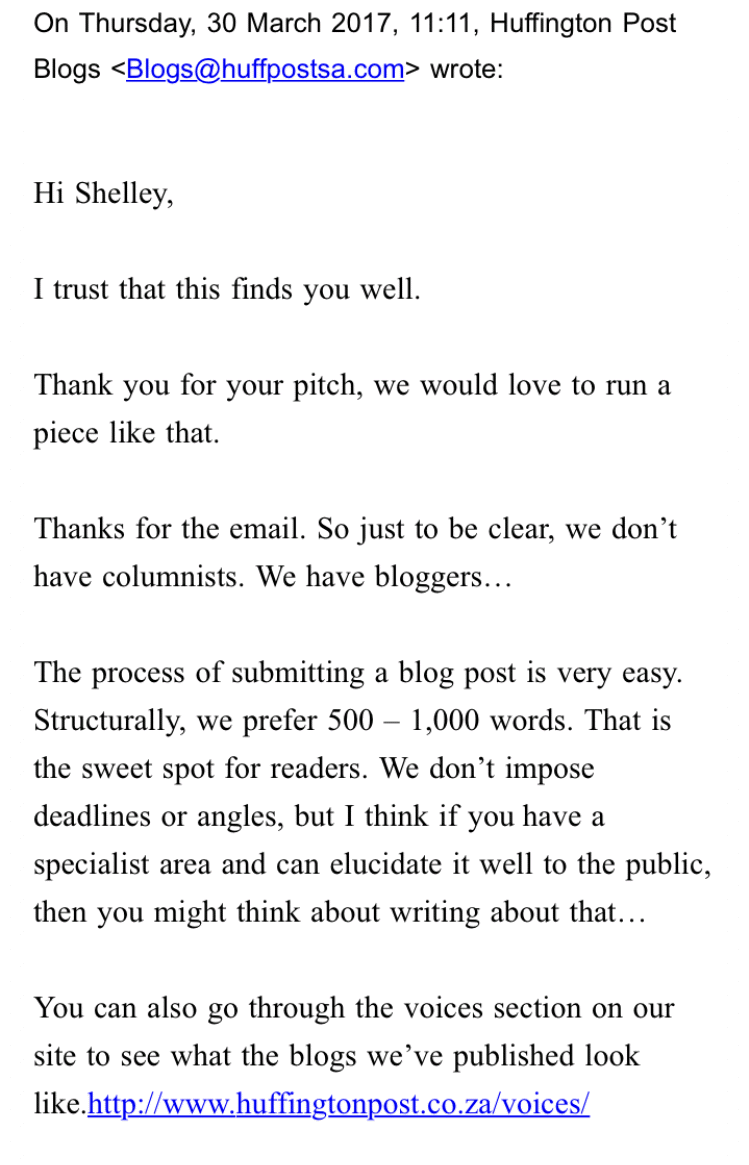 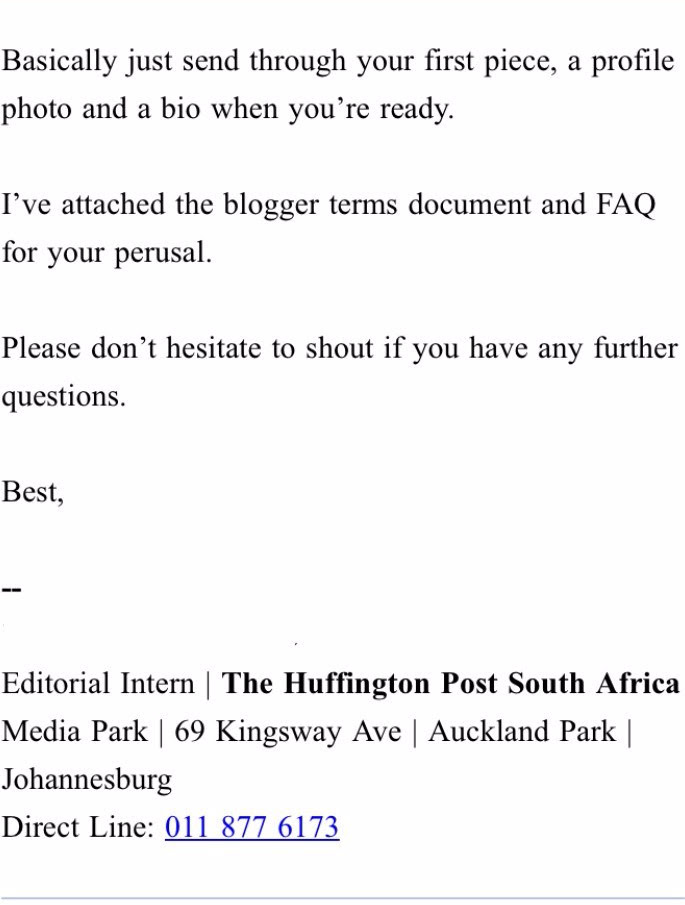 “Shelley” did receive the Huff Po FAQ, which explicitly states that statistics or facts should have a link as evidence for that assertion. The fact that the piece did not adhere to the HuffPo’s own guidelines did not hamper the publishing thereof. 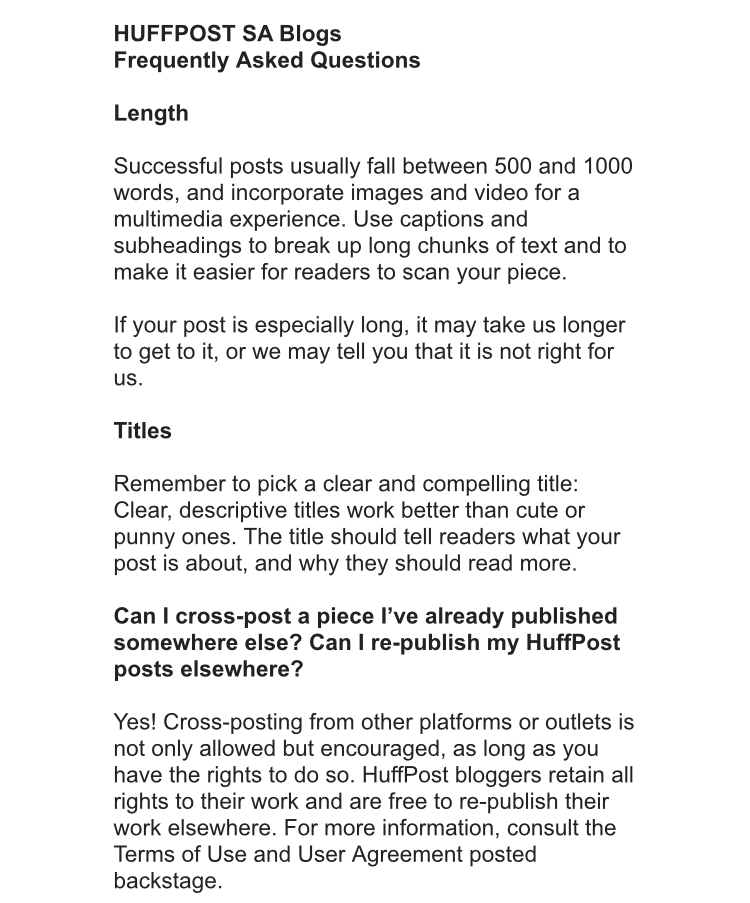 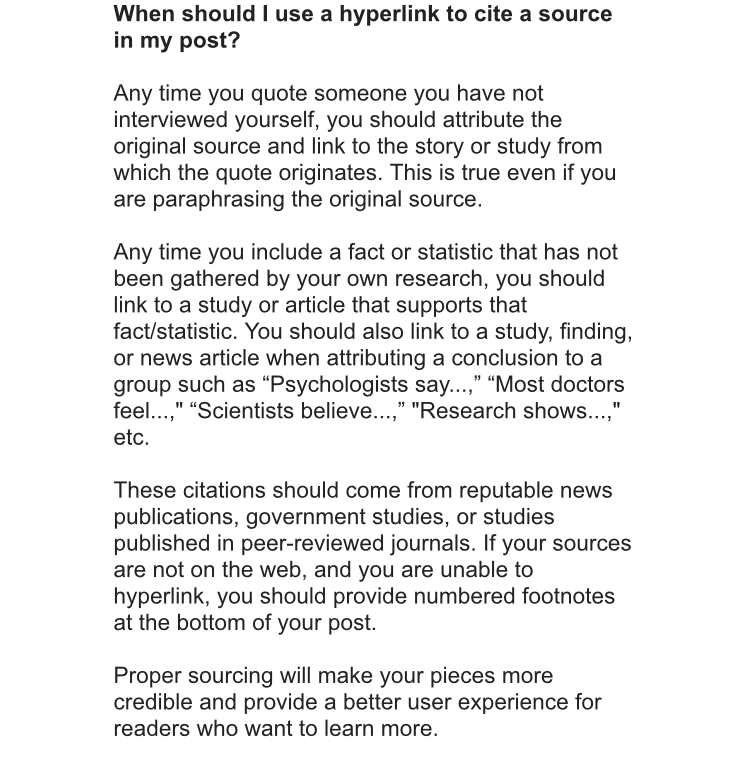 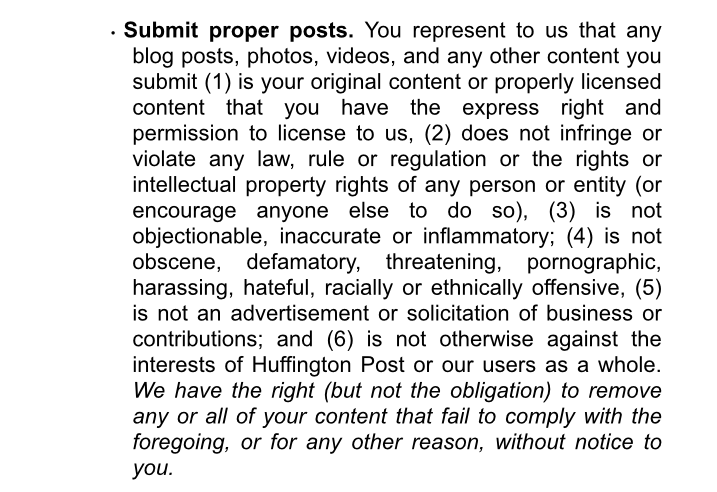 It is abundantly clear that Huffington Post’s own terms were not met. The piece was objectionable, racist, and inflammatory, yet somehow it was still published. There was a fundamental double standard between upholding the very standards that the Huffington Post ascribes to their contributors and the behaviour of their editorial team.

Furthermore news organisations have had ample warning to the risk of false opinion pieces, most notably thanks to the parody Twitter account of @GodfreyElfwick who, last year, baited The Guardian into publishing an article which laughably claimed that prominent atheist and scientist Sam Harris is a human gateway drug to bigotry.

The crux of the matter is that this massive error highlights the all too common issue of ideological narrative trumping any editorial integrity. The Huffington Post chased the ideological position and lost sight of the integrity and standards that are bestowed upon them as journalists at a public media company. The facts simply did not matter. The opinion piece conformed to their ideology and that ideology defined their position on the matter. Ms Pillay cannot claim ignorance or malice. She defended the piece vehemently and decried criticism as merely emanating from alt-right trolls. There was no further interrogation until 24 hours later when the piece was finally retracted following public pressure. The fact that she did not research the author or the claims of the author beggars belief. It is the prime example of a journalistic ethics failure.

If the piece contained opinion which aligned with a narrative but was discordant with reality, it would be assumed that an interrogation of facts would precede the publication thereof, not post-facto as in this instance. Systemic bias in media was a defining feature of 2016. The only people who, it seems, cannot see that bias are journalists themselves. The narrative must never precede the facts.

So, how to combat the scourge of fake news? The answer lies with the Huffington Post itself.

South Africa deserves better journalism, as does the rest of the world.

“Shelley Garland” emailed his/her response to us as well. The name “Nick Fannow” appears to be a pseudonym. 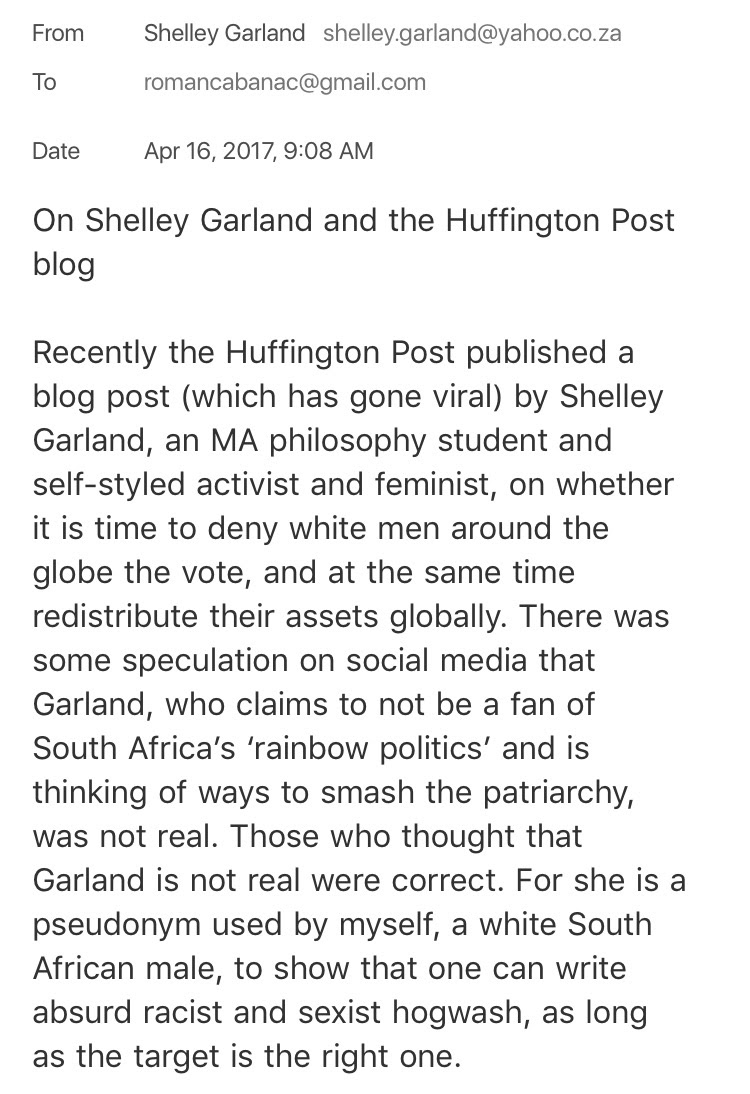 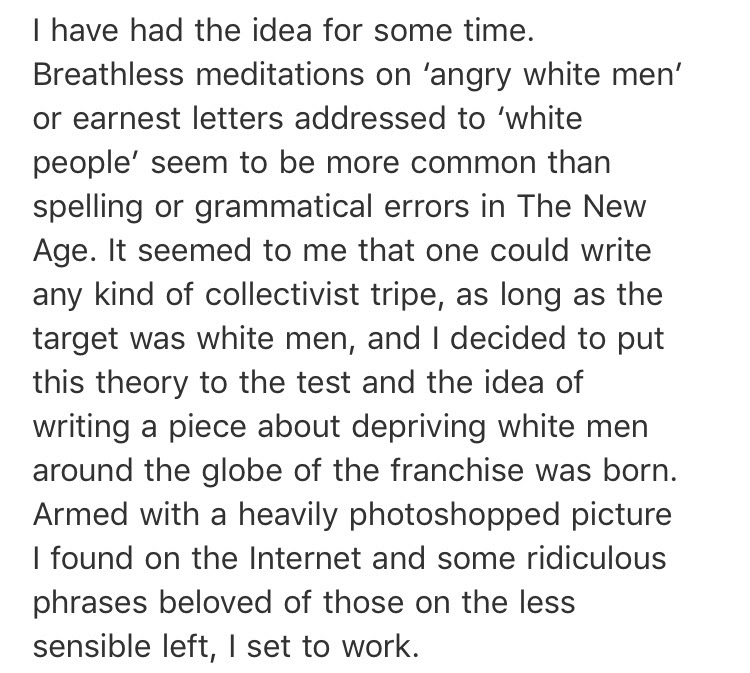 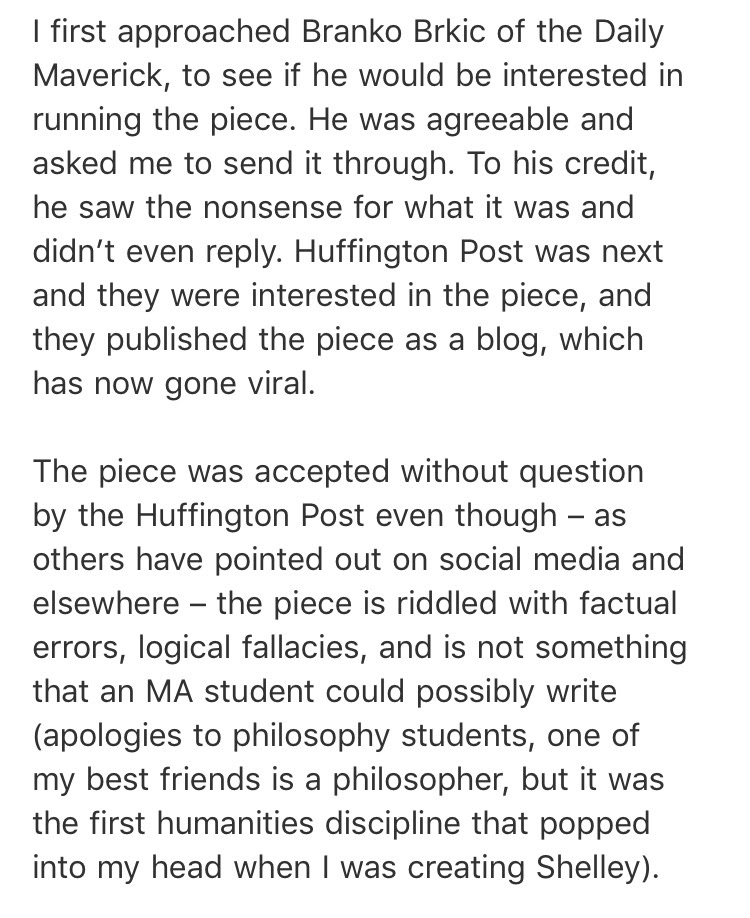 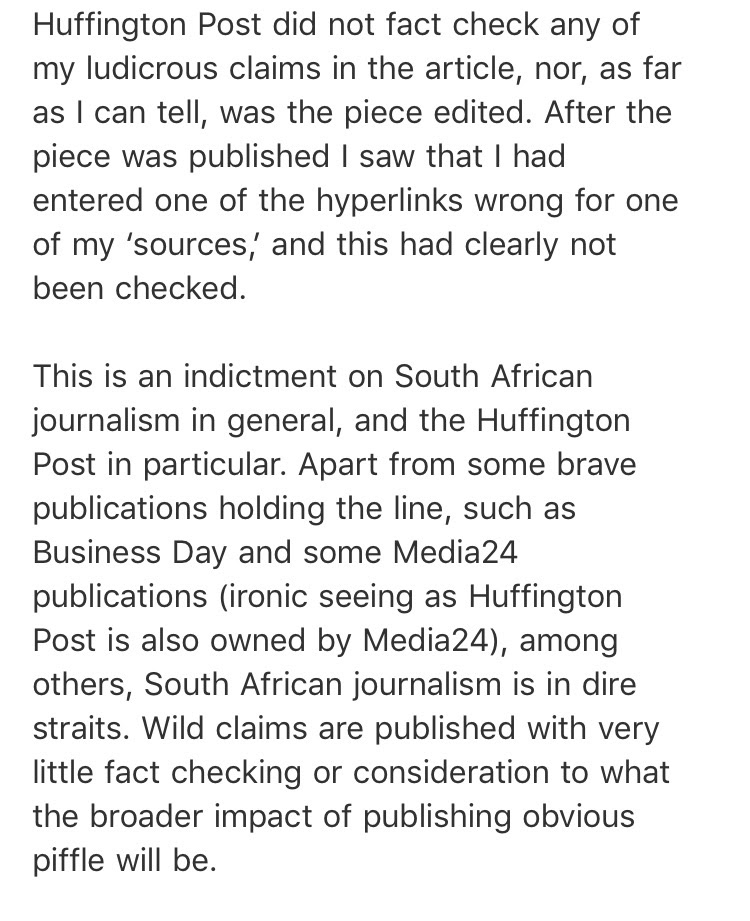 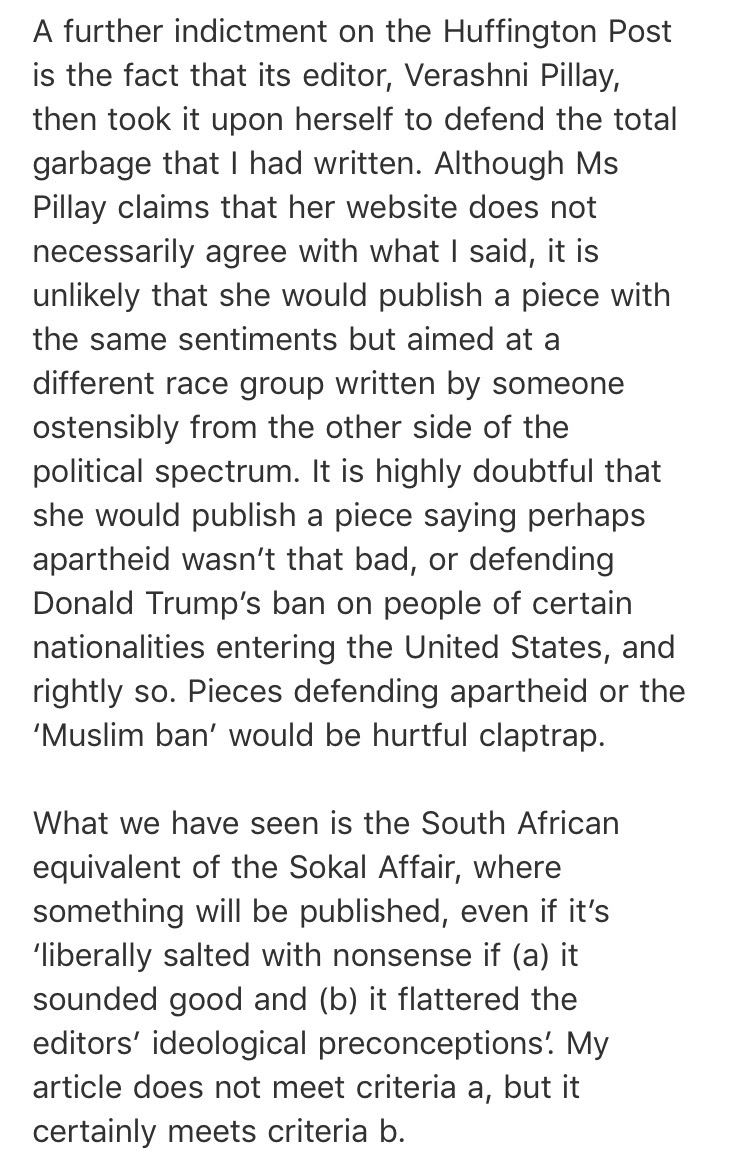 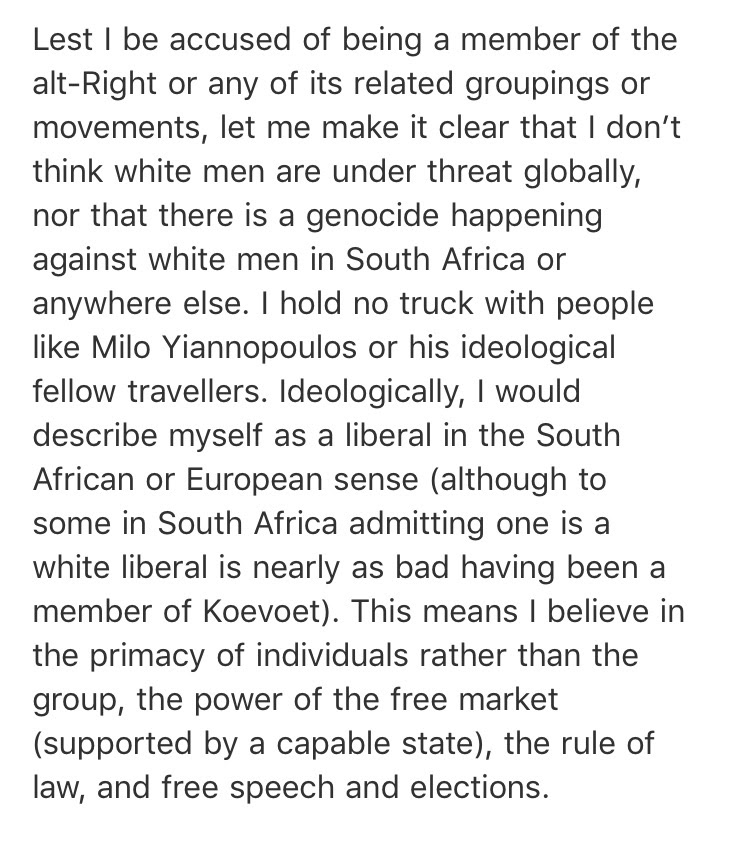 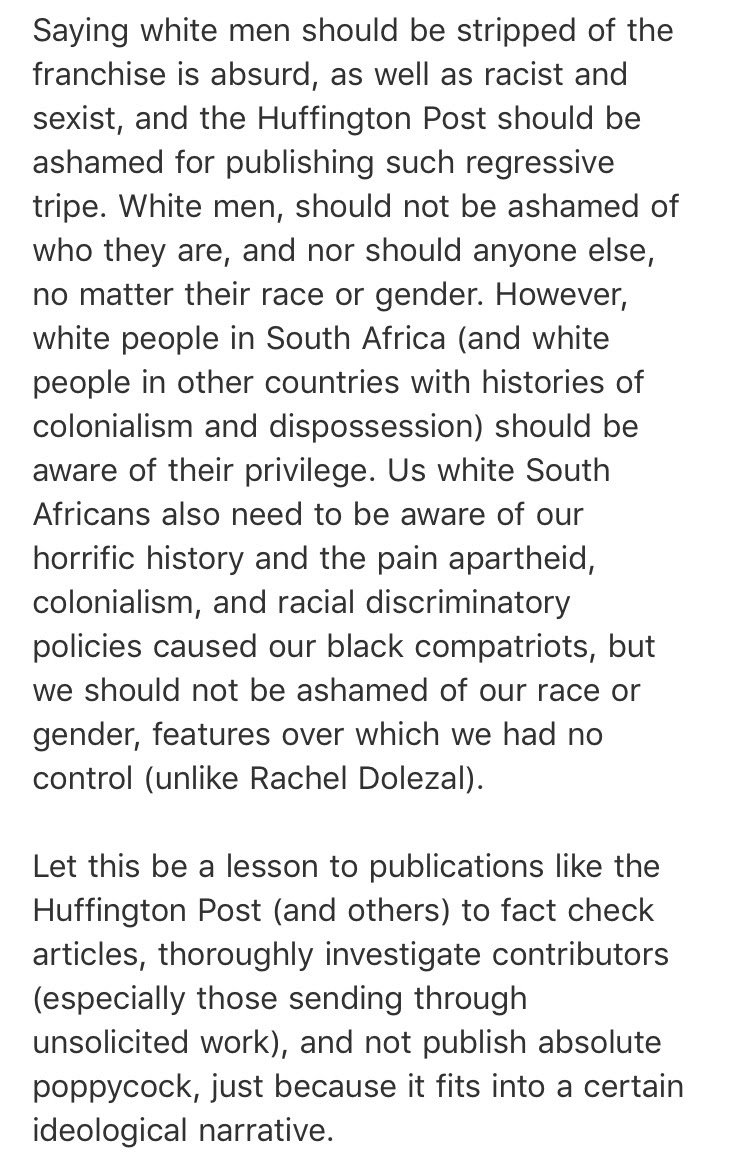