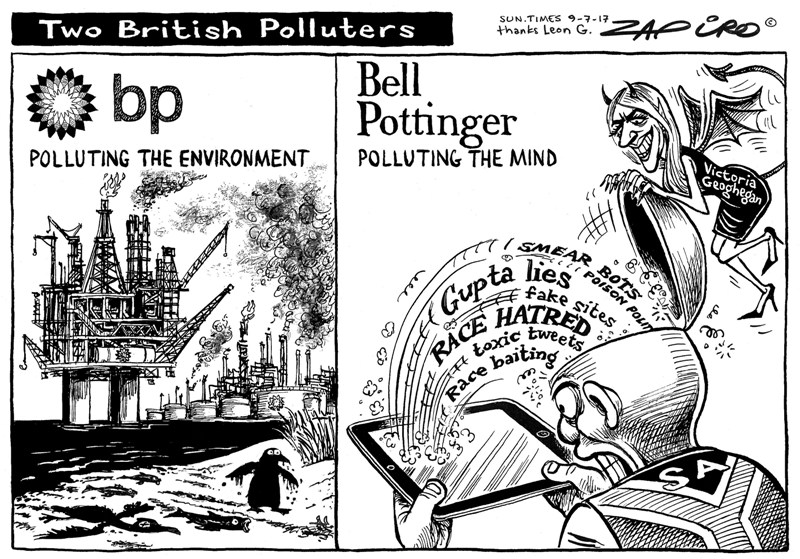 EDINBURGH — A battle between Bell Pottinger co-founder Lord Bell and the company’s CEO James Henderson has erupted in the public domain. Bell Pottinger is the public relations company that has helped President Jacob Zuma’s son Duduzane and friends, the Gupta family, drive the state capture campaign that has engulfed South Africa. Bell Pottinger conceptualised the ‘white monopoly capital’ myth and other propaganda techniques to sow division in the country. Henderson has claimed he did not know what was going in South Africa on his watch – but the company’s founder says the firm’s work with Gupta entity Oakbay was ‘smelly’ from the start. Many South Africans would like to see jail time for Bell Pottinger individuals involved in stirring up political tension while riding on the backs of taxpayers by taking funds acquired through corruption and financial irregularity. – Jackie Cameron

Bell Pottinger co-founder Lord Bell has taken aim at his former colleagues, saying he was “completely ignored” by management when he raised concerns about the firm’s work with Gupta company Oakbay.

Lord Bell warned his colleagues that the contract with Oakbay was ‘smelly’, he said, also lashing out at CEO James Henderson for claiming he had been ‘misled’ about the work being undertaken for the Gupta family.

This is according to UK industry website PRWeek.com, which has picked up the story of how Bell Pottinger played an instrumental role in the state capture strategy played out by President Jacob Zuma’s corrupt friends.

A Change.org petition asking UK Prime Minister Theresa May to look into Bell Pottinger has gained nearly 13,000 signatures at the time of writing, says PRWeek.

Meanwhile, South Africans have planned another protest outside Bell Pottinger’s offices in London.

South Africa has been engulfed by the state capture scandal, with evidence emerging daily of the role of business in corruption and financial irregularity.

South Africans have reacted with outrage over the activities of Bell Pottinger, which developed a white monopoly capital myth for the controversial Gupta family and Zuma’s ANC allies in the ANC Youth League and MK veterans association.

Bell Pottinger was earning more than £100 000 a month for developing a campaign to incite racial tension and create a race-based smokescreen to distract attention from the Gupta family. At the same time, it was also taking money to promote a positive image of South Africa abroad for SA Tourism.

Henderson last week moved to deflect blame for the company’s role in sowing racial division by claiming the scalp of partner Victoria Geoghegan. He announced the dismissal of Geoghegan and the suspension of three other employees over work done for Oakbay Investments, though he did not name Victoria Geoghegan in his press release.

The firm also apologised for what it said was “offensive” campaigning around the concept of ‘economic apartheid’ in the country.

“In that statement, the company’s chief executive, James Henderson, said management had been ‘misled’ about the nature of the account. He had previously told PRWeek it was a corporate reputation brief and that there had been a “gross misrepresentation” of its role,” said PRWeek.

South Africans have rejected Bell Pottinger’s apology as too little, too late. And on Friday the company’s offices in Holborn will be picketed by London-based Saffers who intend demanding full disclosure and a full refund of fees paid by the Guptas.

“Bell, who left the firm last year, told PRWeek that the idea that Henderson was not aware of the nature of the work was ‘rubbish’. He is the chief executive for God’s sake, it’s his job to know what is going on,” Bell said.

“Lord Bell himself met employees of Oakbay and its owners, the Gupta family, in South Africa in early 2016, before the agency began work on the account.

Bell said he then warned others in the business that taking the brief would be bad for Bell Pottinger, but that colleagues “completely ignored me”, says PRWeek.

According to the website, Bell said: “I kept saying it was ‘smelly’ – I told [chairman] Mark Smith it was smelly, I told [international managing partner] David Beck and James Henderson that it was smelly, and they ignored it.”

“Bell spent several months in the middle of the year away from the company due to illness, before announcing he would leave Bell Pottinger in August. He said the work with Oakbay was one of the reasons for his departure.”

PRWeek highlighted how the ‘smell’ around Bell Pottinger has led to the PR company losing key accounts.

“The firm has stopped working with investment firm Investec and mining group Acacia in recent months, and with luxury goods firm Richemont last year. The loss of all three has been reportedly due to concerns over Bell Pottinger’s Oakbay work. Richemont and Investec were both founded in South Africa, and Acacia operates across Africa.

“Bell Pottinger contested Bell’s claims, but declined to provide a comment. The firm also declined to comment on the loss of the trio of clients,” says PRWeek.

“Bell also said that Geoghegan should not be considered a scapegoat for the company, as he was reported as telling the Financial Times, because this would suggest she had done nothing wrong. He said Geoghegan should be seen as ‘the fall guy – or the fall girl’.”

PRWeek says Geoghegan, who is seven months pregnant and was due to go on maternity leave at the time of her sacking, declined to comment on the advice of lawyers.

“The PRCA is looking into a complaint about Bell Pottinger’s conduct, made by South African political party Democratic Alliance. The DA also complained to the CIPR, which is working to ascertain whether any of its members were involved in the work. Both bodies have declined to comment on the ongoing process,” says the UK website.

“Bell Pottinger’s apology has been rejected by the DA and other groups and parties in South Africa, including Zuma’s ANC. The DA has suggested that Bell Pottinger donate its fees for the account, which were initially £100,000 a month, to a charity in the country,” says PRWeek.

For more about Bell Pottinger, read:

Revealed! Bell Pottinger got R5.5m for one weekend to ‘help’ ANC, MK in anti-white campaign