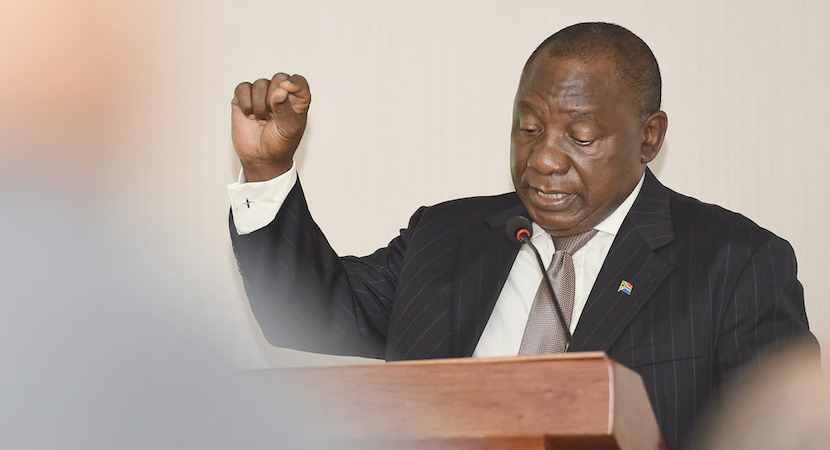 CAPE TOWN — Unsurprisingly in this analysis below, the four possible scenarios that emerge from the ANC’s impending elective conference next month all depend on how soon President Jacob Zuma goes. No prizes for guessing that our economy’s prospects are directly linked to how soon that happens. One cannot help thinking back to when FW de Klerk ousted the stubborn apartheid ideologue and economy-wrecking PW Botha in August 1989, helped by Botha suffering a light stroke and becoming even more irascible. As De Klerk later famously put it, he could now get on with liquidating the insolvent estate Botha left behind. That could not be more appropriate to our second potential reformer in 28 years, Deputy President Cyril Ramaphosa, who features prominently in two of the better scenarios below. The best outcome for SA’s short-term economic future is Ramaphosa winning the ANC presidential battle next month, followed by some dazzling footwork to kick Zuma out before his term as the country’s president expires in December 2018. Second prize would be Ramaphosa losing and breaking away from the ANC, forming an alliance with a ripe SACP and any other willing takers, and winning at the polls a year later. Perhaps the biggest difference in 28 years, besides ideological madness, is the extent of criminal State theft. – Chris Bateman

(Bloomberg) — South Africa’s ruling African National Congress is due to elect a new leader next month and the race is proving to be one of the most hotly contested and divisive in the 105-year-old party’s history.

The front-runners to succeed President Jacob Zuma are his deputy Cyril Ramaphosa and Nkosazana Dlamini-Zuma, Zuma’s ex-wife and the former chairwoman of the African Union Commission, with ANC Treasurer-General Zweli Mkhize seen as a possible compromise candidate. While it remains guesswork who’ll win, what’s clear is that the outcome will have profound implications for Africa’s most industrialized economy and the continent’s oldest political movement.

Here are four possible scenarios of how the leadership race could play out:

After securing control of the ANC by a narrow margin, Ramaphosa faces a dilemma: Does he follow through on his campaign pledge to clamp down on the corruption that’s characterized Zuma’s eight-year tenure and risk widening fissures within the party and alienating some of its top power brokers who benefit from the graft? Ramaphosa could try and prove his mettle and consolidate his grip on power by orchestrating Zuma’s removal as the nation’s president before his second term ends in 2019.

While financial markets are likely to initially cheer Ramaphosa’s victory, he’ll need to move swiftly to revive the moribund economy, rein in government debt and improve the management of state companies to maintain the positive sentiment.

Dlamini-Zuma’s victory raises the odds that Zuma, who backed her campaign, will serve out his second term. That prospect is unlikely to go down well with investors, who were banking on an end to years of policy missteps, misspending and inappropriate appointments. A pending Dlamini-Zuma presidency is also likely to further unsettle the markets — on the campaign trail, she espoused a series of populist policies to redistribute wealth and land to the black majority.

There’s a chance that Ramaphosa’s supporters will break away from the ANC should he lose the contest for the top job and form a new political party backed by a number of its top officials, labor unions and communists. A split could cost the ANC its majority in the 2019 election, setting the country up for an era of messy coalition politics.

ANC bosses in the nine provinces could engineer victory for Mkhize, who’s positioned himself as a candidate who can maintain party unity. Zuma would probably then stay on as president while the ANC’s new leadership decides what to do with him and determines how Ramaphosa and Dlamini-Zuma should be accommodated in the next administration.

Financial markets and investors would likely go into holding mode, awaiting clarity on economic policy, appointments and the outcome of the next election. Efforts to revive the economy and provide jobs for the army of unemployed may stall, hampering the ANC’s re-election campaign.

4. Zuma maintains grip on power as ANC vote is delayed

Legal challenges over who gets to attend and vote at the Dec. 16-20 conference could force its delay, which may leave Zuma in control of both party and state. That would be the worst possible scenario for investors, who’ve been looking forward to political clarity. A sell-off of the rand and nation’s bonds is likely, and the country faces an enhanced risk of further downgrades to its credit rating.