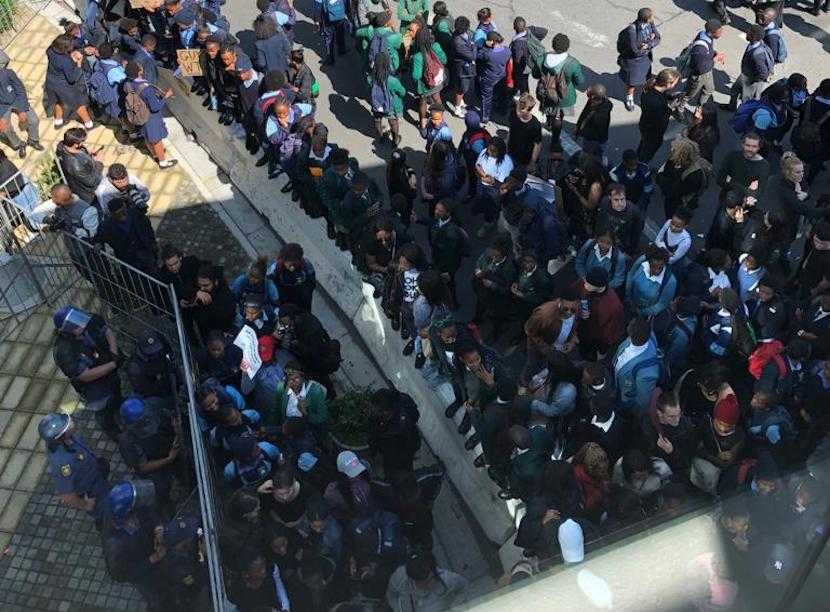 It was all rather surreal yesterday at the opening day of WEF Africa event at the CTICC.

Inside, I listened to the continent’s leading innovators, all West Africans, agitating for the ejection of the continent’s political and business elites. Outside, hundreds of students brought a taste of Hong Kong to Cape Town as they sang and chanted for an end to violence against women.

In between, a number of high profile politicians cancelled their trips to Cape Town in protest to the past week’s xenophobic looting, dampening the atmosphere at this usually exuberant gathering of Africa’s power mongers. Understandable as for most of the day delegates were forced by a police cordon to stay inside the convention centre.

The world is changing. Nobody quite knows what will happen next. In times like this, it’s best to remember God gave us one mouth and two ears so we can listen twice as much as we talk. Particularly those entrusted with leadership. And especially on a continent where poor governance has been tolerated for too long.

Good morning Alec, a most encouraging start to the morning. Thank you for your consistently constructive approach to the ills of our country in spite of intense unrelenting opposition from people who have sound education and should know better.

I’d like to share some proposals with you that you may regard as somewhat overly optimistic but I’m prepared to take that risk because of my love for South Africa.

I am retired now after amazing years at the Cape Metropolitan Council as head of strategic support services. Our successes in transforming our Council from a Broederbond organisation controlling 69 local authorities to one unified Council were predicated upon exceptional leadership – men and women of undoubted integrity with a good few rotten apples thrown into the mix – that recognized the absolute necessity of communication as the glue that makes things possible. My primary responsibility was communication so I speak from a background of solid experience.

Everyone, Peter Bruce and Helen Zille being the latest examples during their “Tea with Helen” exchange, are adamant that Ramaphosa has been disastrous and incomprehensible in the way he has managed the transitional challenges of our country.

In 1994 we had first rate legislation that served as our road map. Ramaphosa says they have a roadmap in his speech but it needs to be gazetted. That serves as the ultimate roadmap.

But most of all, he needs advisors (real experts in change management) who support him politically. They are few and far between but he will find them if he is truly committed.

These advisors – if they know anything about the subject – will insist that he introduces his equivalent of Roosevelt’s famous fireside talks during World War II. Let me be clear. I’m not saying replicate it. That suited the American culture. We’re different but the purpose is to rally the country – not just ANC supporters – behind him as he embarked on this monumental task of moving our country forward. That’s why it needs to be gazetted showing clearly the short, medium and long term goals. Failure to do so will mean that we become yet another failed African state.

I look forward to hearing your responses Alec.