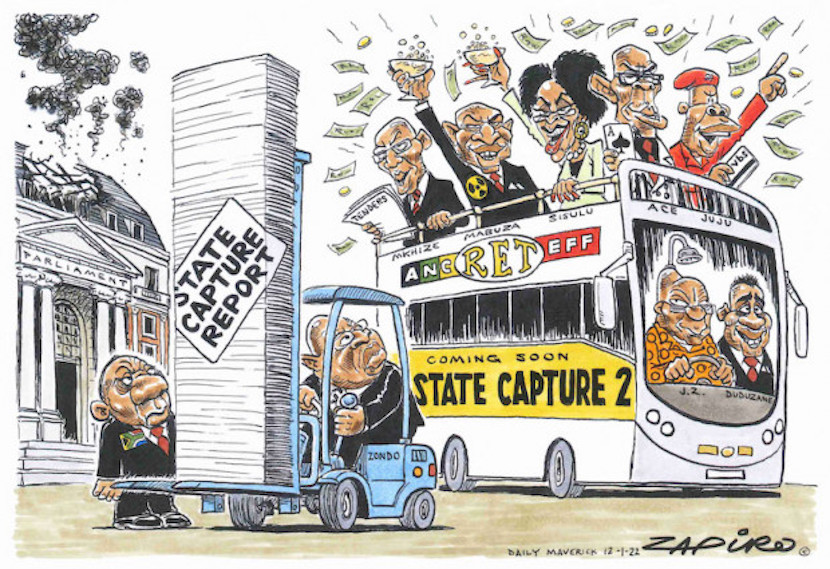 It’s very convenient to use the trusty old socialist fig leaf of ‘greedy capitalism’ to cover up government wrong doings. Especially when there are so many dramatic examples of corporate feeding at the corrupt government trough. But as we’re reminded in this timely Daily Friend article, the guardians of the citadel are elected and paid by the citizenry to defend the Castle of State, not drain the moat, lower the drawbridge and invite all comers in to help steal payment for the services they’re supposed to provide. That the citizens get very little in return for the taxes they pay, most of which have gone into government and corrupt corporate pockets, serves to aggravate the deception and this diversionary guile. What they do get is neglect and contempt. Cronyism and patronage – Zuma and his Zuptoids did not invent these behaviors, they just made them unofficial policy. One that continues without any proper accounting. – Chris Bateman

The first instalment of the report of the Zondo Commission into State Capture fingered a number of high-profile politicians, but also a few major private sector companies. Is the private sector ‘just as guilty of corruption’, as Blade Nzimande would have it?

Major corporate consulting firms and at least one big-four bank featured prominently in the first of three instalments of the report of the Zondo Commission into State Capture. There will be more.

It is tempting to try to be ‘fair’ to the politicians and treat the private sector with equal anger and scorn, but that would be a mistake.

Blade Nzimande, the most equal communist in the South African Communist Party, ‘raised concerns that state capture and corruption was seen only as a public sector issue, saying the private sector was just as guilty of corruption’, according to a report in News24.

‘There can be no justice and an end to state capture from selective prosecution,’ he told the less equal communists at an event commemorating the formerly most-equal communist, Joe Slovo. ‘There must be consistency. State capture is a collaborative crime between unscrupulous elements in the public sector and the private sector.’

No doubt those carrying water for the corrupt faction of the ANC, like Iqbal Survé’s evil minions, will be relieving themselves of heartfelt tu quoque fallacies to divert attention away from the crimes of their patrons and benefactors.

Left-wing ideologues, their developmental state dream betrayed, will want to prop up the case for a big, benevolent, paternalistic government (complete with ‘family meetings’) by suggesting that the private sector probably seduced naïve and innocent government officials into iniquity.

Left-leaning commentators, always eager to appear to treat the ruling ANC ‘even-handedly’, in the vain hope that Squirrel might yet turn out to be a reformer, will heap equally wordy condemnation on the greedy capitalists without whom state capture couldn’t have happened.

When you park your car, leave the keys in the ignition and your wallet on the seat, your wallet, or car, will get stolen. Guaranteed. Of course, the thief deserves punishment. Theft is theft. However, punishing the thief will not solve the problem. If you leave your car unlocked and unguarded again, the same will happen. In fact, if the original thief didn’t steal your stuff, some other thief would have.

That doesn’t make all of us thieves, of course, but there is, for all practical purposes, an endless supply of would-be thieves. Our stewardship of our personal property should be calibrated accordingly.

The solution to the problem, the action that needs to be taken to prevent it from happening again, is to make it harder for thieves to make off with your stuff. Put your wallet away. Close your windows and lock your doors. Arm your car alarm, and keep your keys on you.

The remedy does not lie in asking people not to steal your stuff, and sternly reprimanding them when they do. The responsibility lies squarely with you. You alone can take the necessary actions to prevent future losses.

When a motorist pays a traffic cop to look the other way, who is at fault? The motorist, it is true, is guilty of bribing a government official. That merits punishment.

However, the real problem lies with the corruptible official. It wasn’t up to the motorist not to offer the bribe, or agree with one that was solicited. No public policy can prevent motorists from being prepared to pay bribes.

The responsibility was on the police officer not to solicit or accept the bribe, and to report the matter. That is the level at which public policy can, and should, make a difference.

The same is true on a larger scale. If a government official buys something without authorisation, or ropes in a ‘middle-man’ to skim cream off the top, why should the seller baulk? The responsibility to spend taxpayers’ money wisely and in the public interest lies squarely, and entirely, upon the shoulders of government.

By contrast, the responsibility of private sector companies is to earn their shareholders a return on investment, no matter the adverse circumstances in which they operate. If there are chinks in the government’s armour, they will be exploited, if not by one company, then by a less scrupulous competitor.

If a government is corrupt, there will be no end of private companies lining up to take advantage. If they don’t, their competitors will, so in a sense, they’re forced to play the corruption game, especially when business with government accounts for a large share of the economy, as it does in South Africa.

Ask anyone who has contracted for a municipality, province or national government department how the game is played. Corruption is endemic. It is ubiquitous at all levels of government. Cronyism and patronage are how the system works, from top to bottom.

I find it hard to muster a great deal of anger at those who merely comply with the implicit requirements that a corrupt government places upon them, in order to earn a bit of revenue in an economy that has been knee-capped, hamstrung, hog-tied and paralysed by one anti-private-sector policy after another.

Of course, insofar as private sector actors knowingly played a part in illegal activity, they ought to be prosecuted and punished to the full extent of the law. Thieves are thieves. Accomplices are accomplices.

However, if this particular set of companies weren’t there to conduct work for a corrupt government, and take advantage of the dodgy tenders that were on offer, someone else would have. If you work in a pigsty, you’re going to come out covered in muck.

Preventing government corruption can never be achieved by acting against the private sector. Unlike with government, which is a unitary entity controlled from the top, there isn’t even a well-circumscribed ‘private sector’ against which one could act. There is no chain of command in the private sector. It’s everyone for themselves, out there.

Ultimately, it is up to government and its checks and balances to ensure that the scope for corruption is minimised. Nzimande is quite wrong: there absolutely can be an end to state capture by acting only to make the government incorruptible.

This is why the general recommendations in the Zondo report focus on government procurement processes, government transparency, and independent oversight of government actions.

Creating public policies that help us keep the next government at least moderately clean (because there is no hope of rehabilitating the incumbents) is where our anger and energy need to be directed.

Don’t let the government or its apologists use the wrongdoing of private companies as a fig leaf to cover their own crimes.