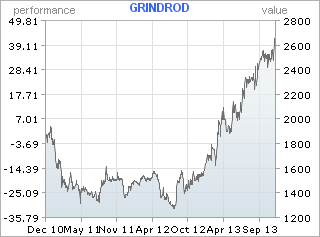 Rob Baker is an investment actuary. He worked in traditional roles for 17 years before breaking out on his own. He loves the investment world and is keen to make a living from analysing stocks. Rob is launching a subscription service at R100 a month, offering to share insight into the processes he goes through when buying or selling stocks to construct a tax-effective portfolio. As he put it: “It’ll be an unusual service in the sense that some of the updates will be very short, and others long  – I won’t need to pad the updates like standard financial magazines, which fill themselves up with low quality information.” I suggested to Rob that he write a piece for Biznews.com to give us an idea of what he has to sell. Here’s his piece on Grindrod which certainly opened my eyes. He’s offered to cut his price for Biznews.com community members to an initial R50 a month (normally R100) for a minimum of a year’s subscription. His contact details are below the article. And no, Biznews doesn’t get a share of that subscription. In case you wondered. Enjoy the “freebie:”. Hopefully Rob will share a lot more of them with us in future. – AH

I just LOVE investing alongside directors – they generally have the most knowledge about the company.

Grindrod is a beast of a company to analyse. It has a lot of moving parts (pun intended!) – divisions varying from financial services to shipping (characterised by volatile, cyclical profits). Adding to the complexity, a lot of the operations aren’t wholly owned. It’s a difficult company to get one’s head around, so take that into account when you think about the probability of my analysis being wrong. There’s also the matter of its balance sheet likely to become more geared as it spends on its major projects. This is not a share for the faint-hearted.

However, seeing directors buying always energises me to do some homework!

Let’s look at how the current spot rates for shipping commodities around compare to the average in the first half of the year:

Note that I’ve ignored the commonly used Baltic Dry Index, as it’s skewed towards Capesize carriers, whereas Grindrod has a lot of Handysize bulk carriers.

In their fleet profile as at August 2013, Grindrod reported that it was using 17.5 Handysize vessels, 1 Supramax, 0 Panamax and 3 Capesize vessels. I did a back of the envelope estimation that the increase in dry commodity shipping rates for Grindrod’s mix of ships, is roughly 100%.

Grindrod also reported using 10.5 medium-range tankers, 4.5 small tankers and 1 chemical tanker. Let’s use the Baltic Clean Tanker Index as a proxy for their rates (decreased by some 10%).

But, the 68% increase is in US Dollars. Taking into account that the Rand has weakened from 9.23 average in the first 6 months of the year to 10.20 against the USD. We’re looking at a roughly 86% increase in Rand terms in the current spot rates versus the average rates in the first half of the year.

Since shipping costs are roughly fixed, an increase in rates goes almost all to the bottom line!

This has happened before – in 2008 the shipping division had an attributable income of R1,794m. As the financial director said at the time : “Drybulk earnings more than doubled on the back of higher earnings on the spot exposed handysize and capesize bulk carriers and a fixed cost base”.

Having said all of this, I cannot stress enough that the spot rates for shipping (upon which this analysis is based) are very sensitive and volatile, with small changes in demand (eg if there’s a Chinese slowdown) or supply resulting in huge moves. The analysis also depends on the exchange rate, which most people are aware is also very volatile. It’s entirely possible that they could plunge downwards just as fast as they went up.

Freight services made a trading profit of R300m in the first half of 2013, 75% up on the prior period’s performance:

Profit in R’m (note the glory days of 2008). When investing in a cylical industry it helps not to invest when they’re at a cyclical high.

Parts of the business require huge capital investment to get going, which shields the business from competition. The ports are impossible to replicate exactly.

Apart from the risks mentioned in the Grindrod reports, there is the risk of terrorist attacks spreading from the Sofala Province further south, and disrupting the supply chains to the Port of Maputo, and possibly even spreading into Maputo.

There is plenty of free capacity available as a result of the capital expenditure. Here’s a rough approximation of the level of drybulk use, based on use in the first half of 2013 and including capacity under construction:

There’s also the possibility that because of its good performance, the company could get to run other ports around Africa.

Caution must be exercised as, inter alia:

As mentioned it’s possible I’m completely wrong, but I believe the odds are in my favour and I’ve bought quite a few shares. My thumbsuck at fair value is that it’s currently somewhere in the range from R35 to R45 a share.

It’s healthy to end off by pointing out that not everybody agrees with me, and that you, dear reader, need to make your own mind up – don’t rely on anybody! Here’s a couple of extracts from broker notes: