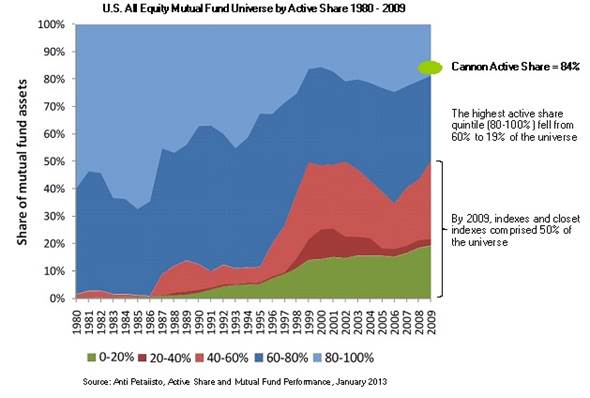 First a health warning. Mark vd Walt runs business development at a boutique asset manager. So, by arguing that the size of a professionally managed investment portfolio matters, he is obviously talking his book. On the other hand, the facts are pretty convincing. As you’ll read below. My opinion on the subject was shaped by listening to the greatest investor of all. At the Berkshire Hathaway AGM in Omaha, chairman Warren Buffett often refers to the relationship between size and performance. Primarily to manage expectations of shareholders in his now enormous enterprise. But when he contends that with investment “size is an anchor” and how he would have done “multiples better with a smaller portfolio” it makes the point. One which vd Walt comes at from a similarly engaging angle. – AH

With a rise in the number of boutique managers, globally and domestically, investors are faced with the age-old question of “does size really matter” in investment? Research from around the world suggests that size does, indeed, count with smaller, boutique-type managers outperforming their larger counterparts by anything between 1% and 2.5% depending on the particular geographical region studied.

And in case you think that this performance differential is chicken feed, consider this …two managers produce returns of 10% per annum and 12.5% respectively will result in a 56.7% differential in return over 20 years!

When this size advantage is combined with the value investment style, evidence suggests that the performance advantage becomes even more significant and a compelling case can be made for boutique managers favouring a value approach to investing.

In most cases, these managers are willing (and do) limit growth in assets preferring to concentrate on alpha generation rather than asset gathering. Boutique managers tend to be “asset managers” as opposed to “asset gatherers”. Portfolios also display some common characteristics. Typically, they are more concentrated with fewer stocks held and often have a smaller/medium cap focus. This leads to higher levels of “active risk” and “active share”, two important components in alpha generation. Furthermore, boutique manager portfolios tend to look different from the herd. Sir John Templeton is quoted as saying “It is impossible to produce superior returns unless you do something different from the competition”.

Boutique managers eat their own cooking

There is a body of evidence which demonstrates the advantages of investing with boutique asset managers.

In their 2006 study Portfolio Manager Ownership and Fund Performance, Khorana, Servaes and Wedge found that funds with manager ownership produce annual outperformance of 1.4% over funds where the manager has no ownership. So, managers who are prepared to eat what they cook perform better than those who prefer to dine out!

In a study of US mutual funds, Baks, Busse and Green (2006) showed that the average fund held 128 stock positions. But the top-performing funds held less than half that number. This leads to the obvious question about risk: do concentrated portfolios lead to increased riskiness of portfolios? The evidence suggests not. One needs to examine whether or not the manager is building a portfolio with enough uncorrelated shares to diversify away company-specific risk, yet not so many shares that the portfolio starts hugging the market. Paradoxically, active managers hoping to reduce risk by running portfolios with a large population of shares actually increase the risk that their fund will underperform the benchmark after fees, trading expenses and other frictional costs such as the bid-offer spread.

Figure 1 below shows that the number of truly active managers has declined significantly over the period – the highest active share quintile (90-100%) fell from 60% in 1980 to 19% in 2009 with indexers and closet indexers accounting for an astonishing 50% of the universe (up from 1.5% at the start of the period reviewed).

As managers become larger, their size constraint forces them to reduce their active share components and their portfolios begin looking more like the index.

A similar picture exists in the South African market where the average active share is 45% and the median manager is 39%. In other words, the SA market is also dominated by indexers and closet indexers. Cannon Asset Managers’ active share of 84.5% sets the company apart from most managers in South Africa.

So how can you beat the market?

For investors wanting to be among the few who do beat the market, the most successful route would be to select a boutique asset manager. And preferably one that swims against the flow – one that has the ability to provide returns which differ from market returns. Evidence shows that value managers are best suited to this, over the long term.