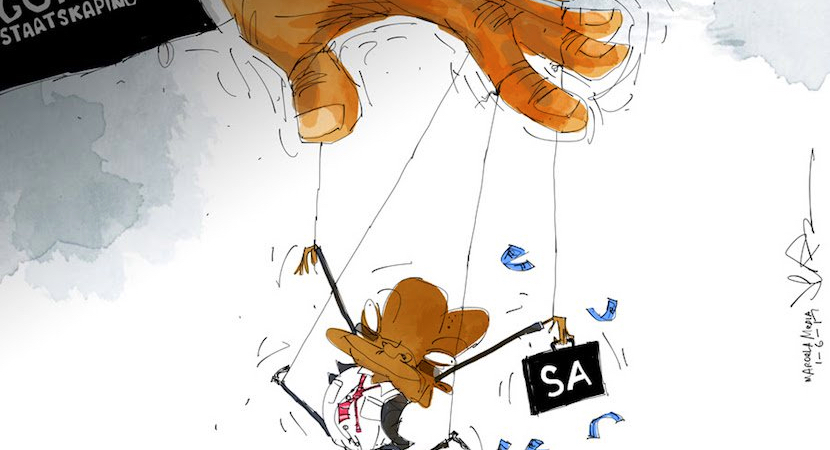 CAPE TOWN — Ideologically, South Africa’s rulers don’t know that they need rescuing from looming economic collapse. They’re causing the country more harm by stubbornly clinging to investor-unfriendly economic policies than the toxic Zuptoid thieves and crony capitalists are. That’s the compelling argument that political analyst and futurist, Daniel Silke makes here. He also adds his name to those flying large red flags at the corporate sector – as if they’re needed, given Bell Pottinger, KPMG and McKinsey – warning that ramped up due diligence is now a vital survival tool, if they want to avoid terminal reputational damage. Some in-house spring cleaning never harmed anyone, especially if you do business with the South African state. He cites the Mining Charter as an example of an investor-unfriendly, shoot-your-country-in the foot, policy. I say shoot your country in the foot because it seems the Charter’s architects are aiming at enriching a small black elite and couldn’t care less about hobbling the nation’s economy. Perhaps it’s down to ideology and, on a generous interpretation, speaking different economic languages. Only a clean-up of the toxic Zuptoid sludge and a concurrent review of policies that have damaged the South African economy, will do the trick. Finding the leadership to do that is the first step. – Chris Bateman

The GuptaLeaks and the alleged collusion from the likes of KPMG and McKinsey serve as a warning shot to any private entity keen to do business with a state battling its own internal demons through a debilitating and prolonged factional battle which now has transcended the public sector into the private.

Indeed, private sector companies now either seeking new business opportunities with the state or even in existing ones, will urgently need to develop a new and ‘special’ due diligence test to ascertain whether they too will be ‘played’ by the complex nexus of factions currently cutting a path of destruction through the country.

It is therefore a time of concern and extra vigilance for any corporate keen to retain their brand reputation to unleash an unprecedented series of internal checks and balances and for management to double-down on checking their second-tier in the relationships with state agencies.

The question arises though, what is the impact of all on this on South Africa’s investor-friendly image? Does it damage it or make it tougher to secure that all important Foreign Direct Investment?

Clearly, a dark cloud hangs over both public and private sector governance that will not be resolved until a re-boot of leadership and associated business ethics occurs at the behest of the State. Already, therefore, South Africa’s FDI has been slipping as other emerging markets not only perform better, but seem more trustworthy in terms of doing business.

But ultimately, as much damage is being done via the internecine political strife within the governing ANC, investor sentiment is still largely based on a perception of the broader policy framework.

High levels of graft and corruption affect a number of nations globally. Authoritarian regimes and their rent-seeking interests are not isolated to South Africa. Yet, for some countries like Turkey, economic growth remains robust. Even Russia, with institutionalised graft is climbing out of a recession and projections for the next year look better.

South Africa therefore occupies the worst position in two worlds. In the global reality of cronyism and corruption, the deep-state encroachment clearly is a negative. But it’s the policy paralysis and/or investor-unfriendly policies that contribute as much, if not more to the damage being done.

Sure, a clean administration and the rooting out of nefarious practices will start to cleanse the toxic mess the country finds itself in. But it is only a concurrent policy review that seeks to rid the country of all the damaging effects of years of poor policy making that will do the trick.

It is the likes of the Mining Charter and its broader implication for interference in private ownership that plays a role amongst the commodity investors – more so than the Gupta’s and associated shenanigans.

It’s a constant questioning of the role of the private sector and added regulatory burdens that stymie positive sentiment around investing in the country.

It’s a failure to find common ground between business, the State and the Unions that create a Labour-related bottleneck to enthusiastic business in the country.

So, in a week in which Egypt, a wonderful nation torn apart by deep domestic political conflict and a tense security situation, manages to top South Africa as Africa’s most attractive investment destination, it’s policy that counts.

If you thought Jacob Zuma was a good choice for 🇿🇦 and ANC back in 2007, please apologize and sit down! JZ was already a criminal suspect.

But, competitive economic policies to grow the pie requires a new ideological commitment to avenues that run counter to many elements within the ANC. Only an exceptionally strong ANC leader would be able to make some start in this process – and with the jury still out on the ANC’s elective conference, the country simply cannot move in the right direction.

There are still far too many in the corridors of power willing to further their own agenda’s over that of the country. South Africa is a long way from a much-needed rescue – yet it’s time may well be nearing.